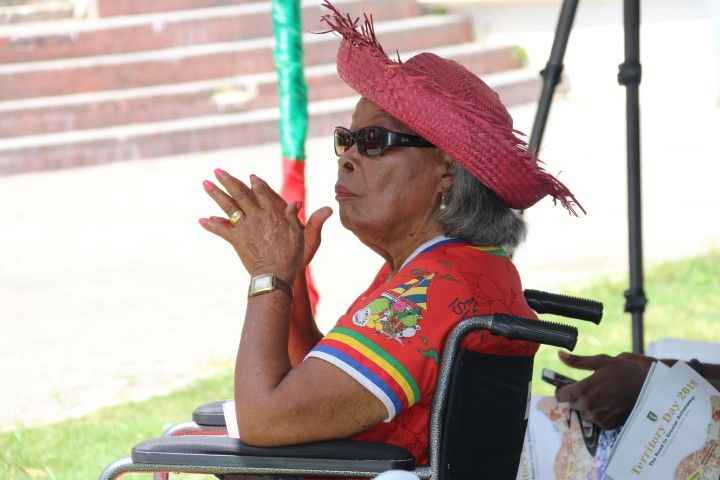 Former legislator Eileene Parsons has come out as a strong advocate for the government to reclaim a plot of private land used for horse racing at the Sea Cow’s Bay-based Ellis Thomas Downs by what she referred to as eminent domain.

Eminent domain is a term used in the United States to refer to the power of the state to take private property for public use with payment or compensation to the owner.

Parsons said she found it strange that residents were told that government has paid its lease for the land up to the end of the year, yet still it was not allowed to use the track.

“I say it without apology – I am an advocate for the word towards eminent domain. You do it for the public good,” Parsons stated on a radio programme recently.

“Honestly, if I was in there and I was the Minister of Sports as I used to be, I would’ve advocated that because you cannot have the BVI sporting public being held hostage for something like this,” the outspoken former legislator added.

“Whatever government has to do with that [Thomas] family, whatever negotiating we have to do, I would advise this government – Honourable Natalio [Wheatley] and others to do the negotiating, and before the end of November, let us have that land belonging to the government that we can have races [on] Boxing Day,” Parsons urged.

Meanwhile, Premier Dr Natalio Wheatley announced weeks ago that the government came to an impasse with one of the land owners after it discovered inconsistencies in its leasing agreement. He said efforts were being made by the owners to increase that lease by some 1500%.

The premier acknowledged in the House of Assembly yesterday that the sport was considered to be of national interest and previously indicated the government planned to continue its negotiations with the Thomas family despite being prevented from accessing the land after making this year’s payment on the lease.

Education Minister Sharie deCastro also clarified that there were no instructions given to the Attorney General’s Chambers to exit the leasing agreement. She outlined some of the inconsistencies contained in the agreement with the Thomas family which she said, “fundamentally affected the legal validity of the document”.

Among the various anomalies highlighted, was the fact that the lease was not signed by a natural or legal person, but rather by a purported entity (Ellis Holdings) which the minister said does not have the legal capacity to contract with the government or anyone else.

More importantly, deCastro stated, the lease was not signed by the registered proprietor of the land or any person or entity acting through a power of attorney. “A lease conveys a legal interest in land, and must be signed by the registered proprietor of the subject land. This accords with the provisions of the Registered Land Act, Cap 229, of the laws of the Virgin Islands,” deCastro explained.

What the law says

The territory’s Land Acquisition Ordinance (1957) addresses the issue of how the government can acquire land by Compulsory Acquisition if it chooses to do so, and recent history shows that this can be done once the government deems that it is in the national interest to do so.

According to Section 3 of the legislation, if the Governor in Council considers that any land should be acquired for a public purpose he may, with the approval of the Legislative Council, cause a declaration to that effect to be made by the clerk of the Executive Council in the manner provided by this section and the declaration shall be conclusive evidence that the land to which it relates is required for a public purpose.

The legislation further states that after a second publication of the declaration in the gazette, the land “shall vest absolutely in the Crown”, and the government can then take possession of the land accordingly.

In 2015, the government faced a similar conundrum when it moved a motion in the House of Assembly to take ownership of a plot of land in the East End community to accommodate a pumping station for the East End National Sewerage project. Back then, the government said it relied on the provisions contained within the Land Acquisition Ordinance, Cap 222, to support its position.