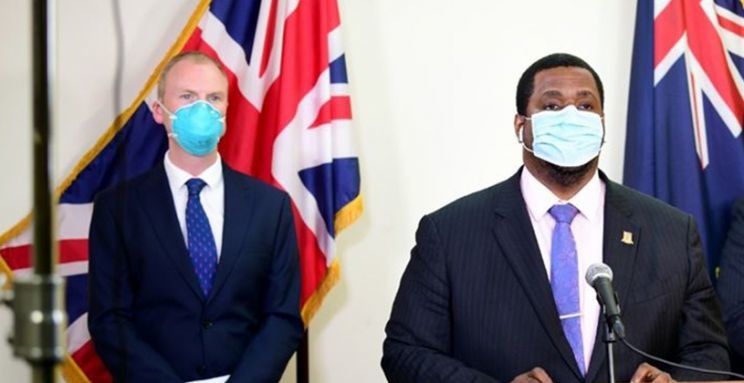 He said that, Governor Jaspert’s intention to deliberately bulldoze the elected Government is pellucidly clear as he has issued a public statement at 6 pm local time, 25 September, 2020, informing the public that the UK Government would be providing various things which his (Fahie) Government and him not asked for and which they advised him of their objection to in the format in which he is proceeding to act.

By letters to the Governor 15, 23 and 24 September, 2020, Premier Fahie said he has been very clear that from a cultural perspective, the people of the Virgin Islands see a role for the UK Military in assisting certain aspects of our border protection strategy, but because of the desire to develop their domestic capabilities the invitation for UK Military assistance is limited to certain functions.

"As such, the request made of the UK, through the Governor, was for maritime surveillance support to complement the existing sea border protection strategy for a three-month period while a permanent border surveillance system is being procured and installed by the BVI," he said in the letter.

Adding, "No request was made for the UK to co-fund or to donate any funds to the procurement of the permanent border surveillance system. What was requested was for the UK to provide technical expertise with regard to the equipment needed and its installation. It was made very clear to the Governor that the BVI being able to purchase a border protection system on its own would be a tremendous accomplishment for Virgin Islanders and would inspire them to recognize their ability and to have confidence in themselves."

It was explained that by letter on the morning of 25th September, 2020, Premier Fahie suggested to the Governor that his unsolicited offer of 50 percent of the cost of the surveillance system – estimated at approximately $300,000, could be directed to other areas of need such as providing equipment and vessels for the Royal Virgin Islands Police Force and HM Customs.

"Despite the position of the Government of the Virgin Islands being clearly articulated to Governor Jaspert, he proceeded to present a paper at this morning’s National Security Council (NSC) meeting which exaggerated the needs of the BVI to paint a fabricated inaccurate and misleading picture of the state of affairs and capabilities of the Territory to justify UK interventions, including military involvement, beyond the scope of what was requested by the Territorial Government," the letter stated.

Premier Fahie said, to describe the BVI’s situation as exasperated and the BVI's resources as stretched, as Governor Jaspert has done in his NSC paper, is an exaggeration and grossly misrepresents the state of affairs on the ground.

"To use this fabricated case to create justification for UK interventions is dishonest. To suggest that the UK Military and Government must swoop in and rescue the BVI people is highly insulting, considering that neither the BVI’s border protection nor our public health situations are out of control. The evidence is that these are being well managed by the Government of the Virgin Islands and our people."

The UK minister was told that when asked to amend his NSC paper to more accurately reflect the state of the Territory’s affairs and needs, and to keep the UK involvement within the scope of what was requested, Governor Jaspert was adamant that he would not.

"The meeting ended with the NSC not agreeing to the structure of Governor’s paper following an extended session in which Governor Jaspert’s demeanour became quite aggressive."

Premier Fahie put the UK on notice that neither his Government nor him, nor the people of the Virgin Islands, will be tolerating this act of aggression by the Governor.

"We will not be bullied and we will not stay silent. I can assure you that the United Nations will be hearing about the UK Government’s sustained policy of political sabotage of the aspirations of the Virgin Islands people at the next C24 meeting. I will also be sharing this experience with the leaders of the other Overseas Territories and Dependencies as well as our CARICOM neighbours, and I will be very frank and open with the people of the Virgin Islands and the wider public from henceforth," he said in the letter.

He also reiterated that there are ways in which the UK Military can assist in the BVI’s border protection strategy, "The requested assistance is for surveillance and interdiction support that is complementary to the current strategy. For any assistance to be meaningful, it must be for three months since this is the period of time we estimate is necessary for the permanent surveillance system to be procured and installed."