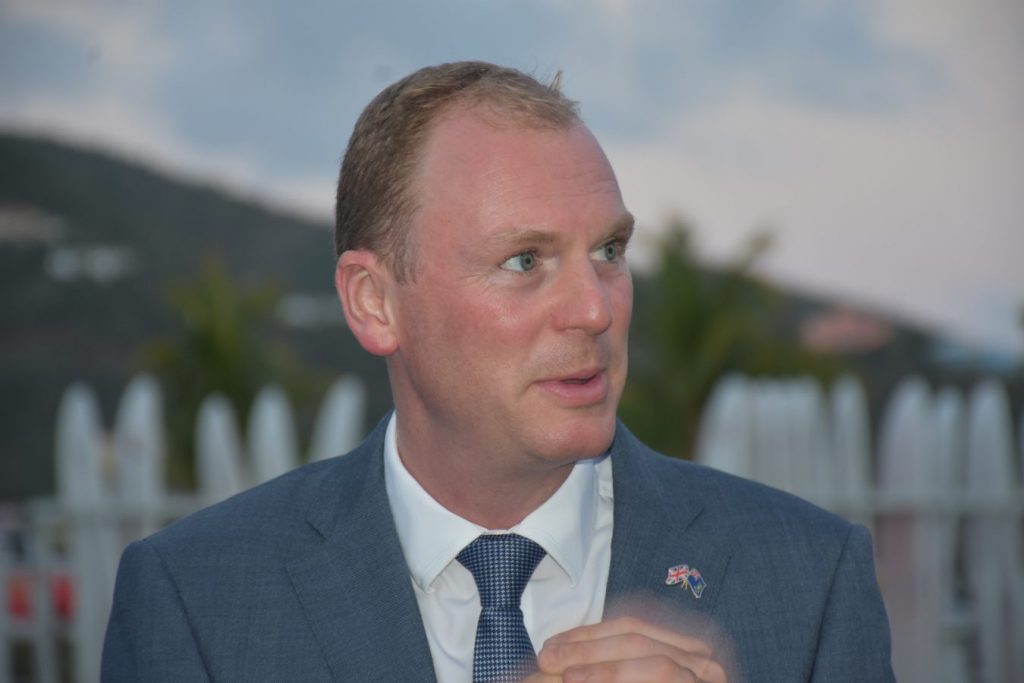 “As your governor, it is my constitutional responsibility to protect the people of BVI and ensure the security of these islands,” Governor Jaspert said in a statement to the territory on September 25, 2020.

Section 81 of the BVI’s constitution gives the governor reserved powers to make decisions without the approval of the House of Assembly, once it’s deemed urgent.

Governor Jaspert said: “HMS Medway will shortly return to our waters to offer additional support with surveillance and act as a deterrent.”

The vessel will stay in the BVI until the end of October and work alongside the Royal Virgin Islands Police Force and other members of the local Joint Task Force to support patrols and temporary radar arrangements in place.

The governor made it clear that the naval support will be fully funded by the UK government. He assured the BVI that, “the crew will not come on to land and will not meet Joint Task Force officers face-to-face in order to avoid any risks of transmitting the virus.”

In a statement Friday evening, Governor Jaspert said he decided to invite UK assistance because border security is now more important than ever. He said he has remained in close contact with the National Security Council and the Joint Task Force who are finding it challenging to secure the borders with the limited resources they have.

“In March, we took decisive action to close the borders in response to COVID-19 and set up the Joint Task Force – made up of officers from the Royal Virgin Islands Police Force, the Immigration Department, and Her Majesty’s Customs. Officers have worked 24 hours a day, 7 days a week, with limited resources and under intense pressure,” the governor said.

He continued by explaining that as the BVI relaxes internal restrictions, it needs “to ensure we are not hampering the progress we make by letting COVID-19 slip in illegally through the back door”.

In August, Governor Jaspert informed the territory that when COVID-19 started to spread in the BVI, he offered to invite the UK to help bolster the territory’s border security.

Premier Fahie has refused this help, saying accepting military assistance from the United Kingdom will be a last resort for the BVI.

In his latest statement to the territory, Governor Jaspert said he was disappointed that the offer was refused.

“I was disappointed that the offer of security support was not accepted at the time, as I felt it was a missed opportunity to enhance our local capability and protect our community from external risks. I have continually pressed this as a priority with colleagues. Now, in light of recent events and subsequent consequences, I feel I must do all in my power to protect the people of the British Virgin Islands and to support our dedicated law enforcement teams,” the Governor said at the time.

Governor Jaspert said his office is currently preparing another offer of UK support to assist the BVI in curbing illegal smuggling.

“I know that people want BVI to be able to take care of its own affairs as much as possible. I understand and fully support this. Therefore, I am working to develop a package of support that will enhance our local capabilities and put in place more permanent surveillance systems to improve security and curb illegal smuggling. I will withhold from disclosing the full details, out of respect for National Security Council members, until plans are discussed and agreed.”

He continued: “What I will say for now, is that we need to send a clear message to those involved in illegal activities and smuggling across our borders that it will not be tolerated. For every illegal landing on our shore, the risk of COVID-19 re-infecting our community returns. As long as our borders are porous, lives are in danger. I am not prepared to take that risk. Only those who benefit from illegal entries and illegal activities stand to gain from porous borders.”

When Premier Fahie refused the governor’s offer of UK assistance earlier this year, he had said he didn’t not want to make the same error as other territories or countries by signing off on a decision disguised as an act of assistance.

“Every time we have been pressured to accept military presence in the territory, we have been required to consider the social, historical and cultural aspects of this decision. And part of that includes our march towards self-reliance and self-determination,” Premier Fahie had said.