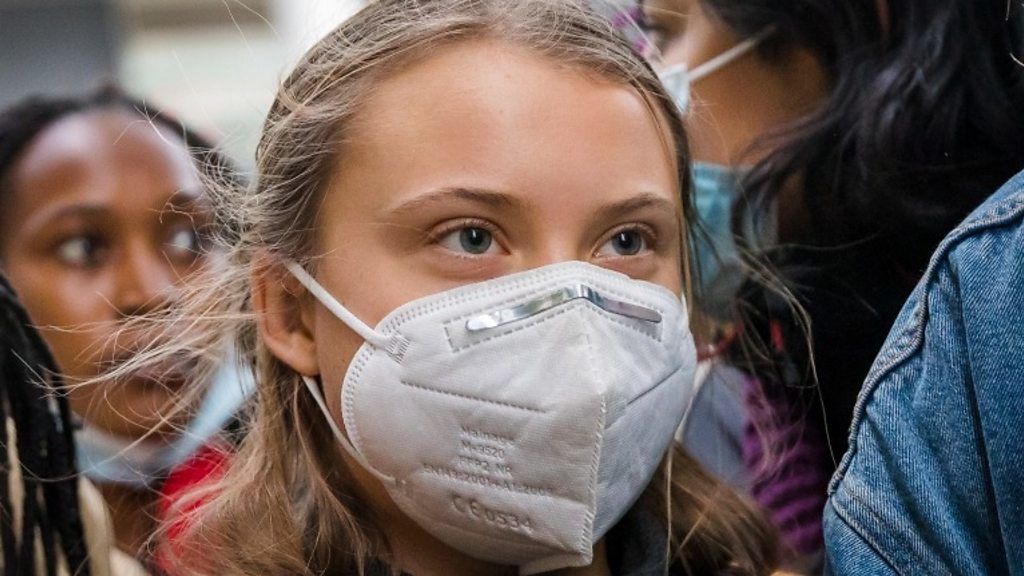 Greta Thunberg has defended the tactics of environmental activists who have blocked roads, saying "sometimes you need to anger people".

But the teenage campaigner, who is in Glasgow for the COP26 summit, told the BBC it was important to ensure no-one was hurt.

It comes after Insulate Britain protesters have repeatedly brought major roads to a standstill.

Asked if she wanted to be a politician herself, Ms Thunberg said: "Not yet."

The 18-year-old was surrounded by police, media and activists when she arrived for the climate change summit in Glasgow by train on Saturday evening.

She told the BBC's Andrew Marr Show people needed to demonstrate "massive public pressure" on politicians to ensure they did enough to reduce carbon emissions.

Asked about the tactics of campaigners who blocked roads, she said: "As long as no-one gets hurt then I think sometimes you need to anger some people."

The activist, who shot to fame worldwide after leading school strikes to protest against climate change, said her own movement "would never have become so big if there wasn't friction".

Ms Thunberg said it was "possible in theory" to reach an agreement in Glasgow to keep global warming below 1.5C, which scientists say will avoid the worst impacts of climate change.

"We know that change is possible, because we can look back in history and see that there have been massive changes in society that have been unprecedented," Ms Thunberg said.

"If we felt like there wasn't any hope, we wouldn't be activists."

Asked if she would seek elected office now she was 18, she said she had considered the possibility, "but no - at least not now".

"We need to reach a critical mass with people who are demanding change and right now it's more efficient to do that from the streets than from the inside.

She said if nations changed their approach from looking for "loopholes and excuses not to take action", then "we could achieve massive changes".

Even if COP26 fails to reach an agreement, she said: "There is not a point where everything is lost.

"We can always prevent things from getting worse. It's never too late to do as much as we can."

The COP26 global climate summit in Glasgow in November is seen as crucial if climate change is to be brought under control. Almost 200 countries are being asked for their plans to cut emissions, and it could lead to major changes to our everyday lives.