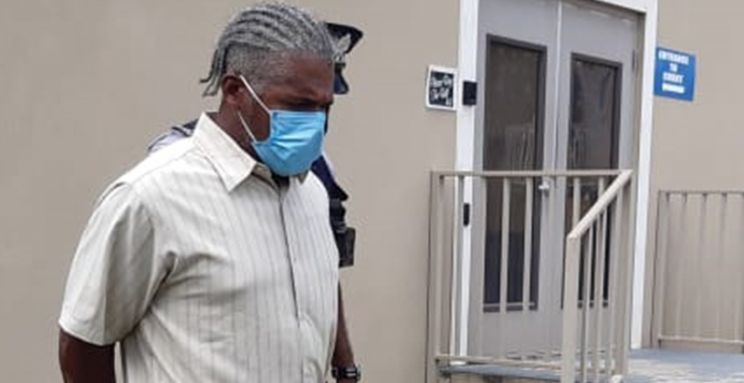 A Guyanese national was, on Wednesday, March 24, denied bail when he appeared before Senior Magistrate Tamia Richards for inflicting harm to his nephew during a domestic dispute.

Gary Gonzales, 47, who resides in Hannah’s Estate, was charged with Inflicting Grievous Bodily Harm on Neville Alphonso, his 59-year-old nephew.

He was not required to plea when he made his first appearance before the magistrate's court on Wednesday, because the matter is indicatable and is headed to the High Court.

On Saturday, March 13, the defendant and the Virtual Complainant (VC), who live and work for the same construction firm, came home from work and were having some beers.

The defendant then turned off the lights in the apartment and laid down on a bunk bed.

Shortly after, the VC came in the room and turned on the lights and began teasing the accused, and an argument followed.

The accused then punched the VC several times in the abdomen, causing him to fall on the floor, where he continued beating him on his abdomen.

On March 15, the VC sought the assistance of family members to be taken to the hospital after his attempts to self-medicate were unsuccessful. He underwent surgery for a ruptured bowel, but he is now in a stable condition.

Crown Counsel Lyn Baley objected to his bail. She said the circumstances of the incident, the seriousness of the injury, the fact that the men reside together, and the penalty is a custodial sentence if he is found guilty which could be an incentive for him to abscond.

Gonzales was then informed that his bail was denied, but bail could be considered in the future if alternate housing arrangements can be made.

The court also heard that despite having family relatives here, the defendant is on a work permit and has only been in the territory for three years.

“I am putting you on remand,” Senior Magistrate Richards said. His matter was subsequently adjourned to April 26 for reporting purposes.