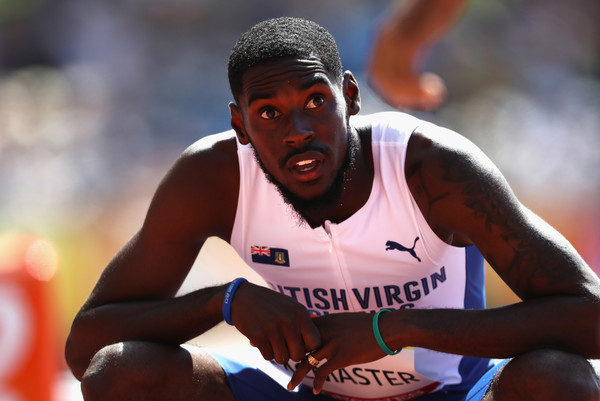 Local hurdler Kyron McMaster missed last night’s 400-metre hurdles semi-final at the World Championships in Oregon, USA because of injury.
He is now looking to recalibrate and focus on defending his crowns at the Commonwealth and North American, Central American and Caribbean Athletic Association (NACAC) Games next month, according to BVI coaches.

McMaster — ranked fourth in the discipline by World Athletics this year — had finished fourth in his heat of the preliminary round of the hurdles event held at the weekend. He had started his heat well before clipping a hurdle on the backstretch and was in noticeable discomfort on his way to the fourth-place finish.

He was expected to do battle with Olympic silver medalist Rai Benjamin in his semifinals. However, one of the coaches for the BVI’s track team at the World Championships, Mark Elliot, confirmed McMaster pulled out of the semifinals because he suffered an injury.

“The issue at present is that we had to withdraw Kyron from the semifinal due to hamstring injury just considering the length of the season. He still has the Commonwealth games to go. It was the best decision for the athlete to ensure he could maintain and continue through the rest of the season,” Elliot said.

“He’s a bit down but I think one of the things is his goal for this season was defending his Commonwealth Championship and his NACAC Championship and both of them are basically another couple of weeks out. So out precaution for that, we thought it was best for the athlete. His coaches made a decision, and we agree,” Todman said.

“One of the things I didn’t want Kyron to do is try to go in there because I know he is hurting because he thinks he is gonna let the country down and he thinks he is going to let his coach down. But to go in there and try to run when he is not at a hundred percent, I think he would be doing more harm than good. Right now, we have to protect Kyron from himself,” the head coach said.

McMaster will look to brush off the disappointment and recover in time for the Commonwealth Games in Birmingham, England which begins on July 28 and ends on August 8. The NACAC Championship will follow shortly after from August 19 to 21.