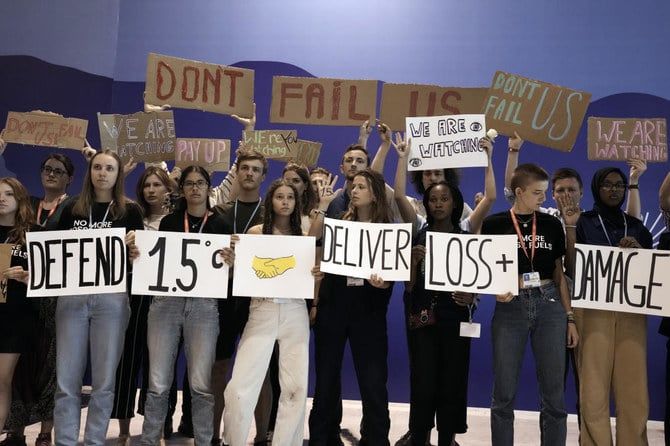 The UN COP27 climate summit in Egypt drew praise Sunday for the creation of a “loss and damage” fund to help vulnerable countries cope with the destructive impacts of global warming.
But there was also anger over a failure to push further ambition on cutting emissions in order to keep alive the aspirational goal of limiting global warming to 1.5 degrees Celsius from pre-industrial levels.

Here are some of the reactions:

“This COP has taken an important step toward justice. I welcome the decision to establish a loss and damage fund.”
“Clearly, this won’t be enough ... To have any hope of keeping to 1.5, we need to massively invest in renewables and end our addiction to fossil fuels.”

“My friends, we heard the call and we responded. Today here in Sharm el-Sheikh we stablished the first ever dedicated fund for loss and damage, a fund that has been so long in the making.”

“Millions around the globe can now sense some glimmer of hope that their suffering will finally be addressed appropriately.”

“The establishment of loss & damage fund at the UN climate summit is the first pivotal step toward the goal of climate justice.”

“The historic outcome on loss and damage at COP27 shows international cooperation is possible. Equally, the renewed commitment on the 1.5C global warming limit was a source of relief.”

“However, none of this changes the fact that the world remains on the brink of climate catastrophe.”

“We are already living in a world of 1.2 degrees change that is becoming unlivable for many. The world is watching us, and they will not forgive us if we fail again to prevent the worst.”

“What we have in front of us is not enough of a step forward for people and planet. It does not bring enough added efforts for major emitters to increase and accelerate their emissions cuts.”

“In a historic breakthrough, wealthy nations have finally agreed to create a fund to aid vulnerable countries that are reeling from devastating climate damages.”

“This loss and damage fund will be a lifeline for poor families whose houses are destroyed, farmers whose fields are ruined, and islanders forced from their ancestral homes.”

“We are just a meter above sea level. Every fraction of degree in increase in temperature and every millimeter of sea level rise threatens our existence.”

“We made it clear over the past two weeks that mitigation ambition (cutting emissions) was a cornerstone of our outcomes here at COP27. I am disheartened we did not get there.”

“It is more than frustrating to see overdue steps on mitigation and the phase-out of fossil energies being stonewalled by a number of large emitters and oil producers. The world is losing valuable time to move toward 1.5 degrees.”

“Each of us will have to explain that, to our citizens, to the world’s most vulnerable countries and communities, and ultimately to the children and grandchildren to whom many of us now go home.”