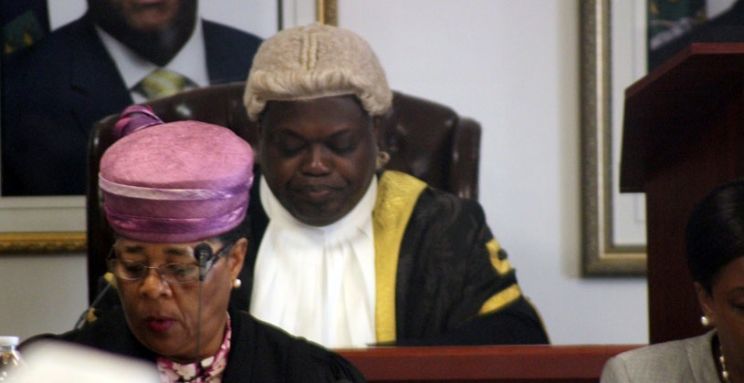 Speaker of the House of Assembly, Hon. Julian Willock has bemoaned the lack of responsiveness from the Governor's Office and Secretary of State, the Right Honourable Dominic Raab’s with regard to their assent of two critical bills passed by the legislature.
In a statement issued on Monday, April 26, Hon. Willock outlined that the Drugs (Prevention of Misuse) (Amendment) Act; and Disaster Management Act, 2021 were duly passed in the House of Assembly.

Hon. Willock revealed that it is extremely concerning that the Right Honourable Dominic Raab has stated to the Premier that he is awaiting the reports from the Commission of Inquiry before making a decision as to the assent to the Drugs (Prevention of Misuse) (Amendment) Act.

He outlined that the Bill was passed some six months plus before the Commission of Inquiry.

The Speaker added, "But what we find rather disturbing is that although I as Speaker have written several letters to the former Governor enquiring as to why he has failed to give his assent. He did not respond to me, (except in one case when I was on leave) but rather, wrote to the Premier."

He noted that in that response, the Governor claimed that the Virgin Islands Cannabis Licensing act was not assented to because it violated the Territory’s international obligation, specifically the 1961 Single Convention on Narcotic Drugs and the 1971 Convention on Psychotropic Substances.

However, Hon. Willock explained that the former Attorney General clearly disputed this assertion and noted there are absolutely no violations.

"The failure of the Office of the Governor to raise objections or concerns during Cabinet has caused a great deal of time, money and other resources to be wasted, and constitutes the very maladministration issues that the Commission of Inquiry is supposed to look into," Hon. Willock stated.

He pointed out that the principles of natural justice and modern partnership, however, would have required that the Governor and the Secretary of State give reasons for their denial of assent of the bills to the House of Assembly so that the Honourable House could respond.

The Governor, he says, in keeping with Article 79(2) of the Constitution may reject assenting to a Bill if it is found to be inconsistent with any obligation of Her Majesty or of Her Majesty’s Government in the United Kingdom towards any other state or power or any international organisation; to be likely to prejudice the Royal prerogative; or to be in any way repugnant to or inconsistent with this Constitution.

"What we can therefore conclude from this “Modern Partnership”, is that unless a bill passed by the House of Assembly conflicts with these specified terms, the assent of the bill by the Governor is to be expected. Natural justice is a critical element of our democratic values and rule of law as expressed in the preamble. Therefore, where the Governor exercises his or her discretion not to assent to a bill duly passed by the House of Assembly, he or she would need to clearly outline the reasons for the objection to the Speaker of the House," Hon. Willock reasoned.

He added, "The Governor could have taken the opportunity in the first instance to object (at the cabinet-level), he could have done so in the second instance (at the first reading), but only after the House of Assembly had expended time, resources and money, debating and passing the bill did he decide to raise his objections."
#Commission of Inquiry  #the Virgin Islands