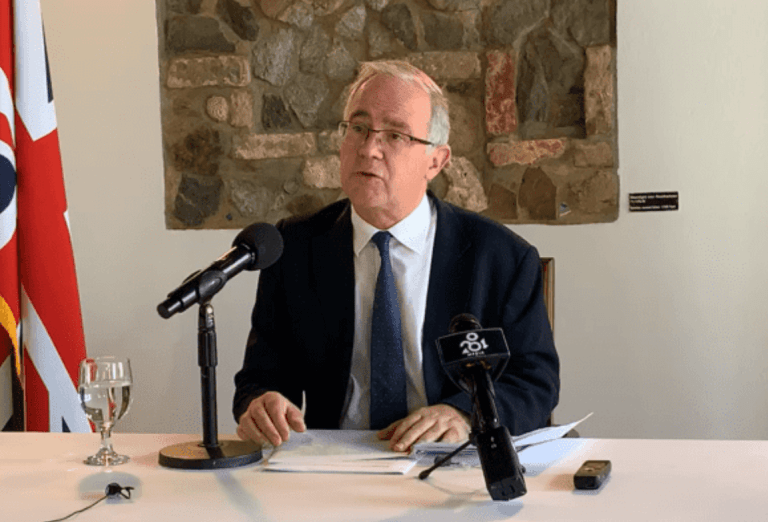 Governor Rankin recently made that disclosure to the London-based news organisation, Tortoise Media, months after publicly denying that he was aware of investigations being carried out in the BVI by US Drug Enforcement Administration (DEA) officials prior to the arrest of former Premier Andrew Fahie.

In his interview with Tortoise last month, Rankin said: “I do give the authorisation for DEA operations here [in the BVI]”. He further indicated in the interview that he is aware of those operations generally. According to Tortoise, the Governor shared the audio clip containing that statement “inadvertently”.

Notwithstanding his admission, Governor Rankin had also reiterated what he said to the local media back in June – that he was unaware of the DEA’s operations as it relates Fahie.

In the meantime, Tortoise media — who shared its interview with Rankin via its podcast — explored three possibilities as it relates to the veracity of Rankin’s claims.

The first of those possibilities that the London-based media entity outlined was that the UK government (and by extension, the Governor) was blindsided by the US.

“This would mean that the Office of the Attorney General in Washington declined to inform an ally that the head of government was due to be arrested in a planned sting operation … Or, [His] Majesty’s Government wasn’t blindside and, at some level, acquiesced in the removal of a Premier it had reason to believe was corrupt,” Tortoise Media’s Giles Whittell posited in the aforementioned podcast.

According to a US-UK Bilateral Relations Fact Sheet published on the US Department of State’s official website, the United States has “no closer ally than the United Kingdom”.

The Department of State said the strong relationship between the United States and the United Kingdom reflects their common democratic ideals and values that are “reinforced through cooperation on political, security, and economic issues”. It added that the two countries “work closely together to combat terrorism, stop the proliferation of weapons of mass destruction, and ensure regional security”.

The third possibility Tortoise Media explored was that Governor Rankin wasn’t informed of the operation for his own safety.

“There are times that a governor might need plausibility deniability because of the risk of reprisals from the organised crime world and this could have been one of those times,” Whittell noted.

Former Premier Fahie is currently confined to a Miami apartment awaiting trial for charges related to drug and money laundering.