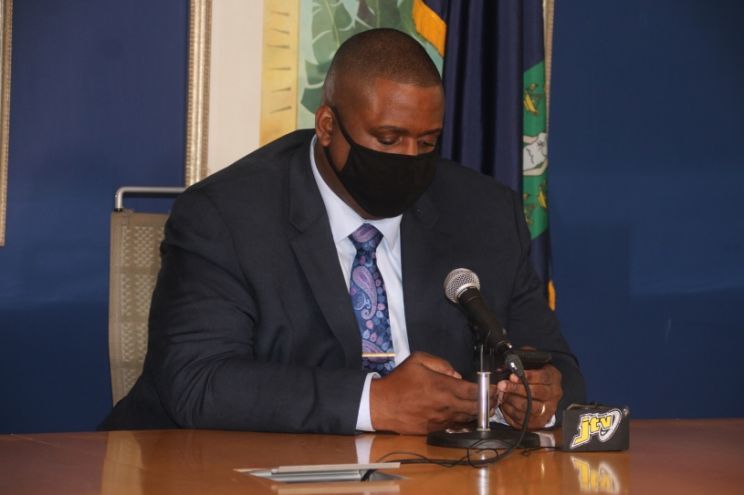 I Have No Fear Of The Truth! Premier Says After CoI Appearance

Premier and Minister for Finance Hon. Andrew Fahie said when he appeared before Commissioner Sir Gary Hickinbottom on Tuesday, May 18, he was grilled on a number of areas, including allegations of corruption under the National Democratic Party (NDP)’s time in office.
“May I say that the questions put to me by the Commission were on a wide range of focus areas including, but not limited to, Mr. Claude Skelton-Cline, EZ Shipping, Mrs. Patsy Lake, Mr Bevis Sylvester and many other persons and programmes and projects. These were all answered faithfully, truthfully, accurately and in detail. I was also questioned about allegations of corruption under the last Administration, when I was a Member of the Opposition and also, for a time, Leader of the Opposition,” he said during his opening statement in a press conference on Thursday, May 20.

He added, “I was glad to answer those questions truthfully, factually and accurately, and I was happy to have the opportunity to put into proper context the concerns and questions that I had publicly asked in regard to Governance during that period of time, and also to put into context all the other questions that were asked.”

The Premier, while he did not dive into any further details relating to the types of questions, said he would be happy to return before the CoI to answer any further questions that may be required of him.

He added, “I have always said that as Premier, as your elected leader of the Virgin Islands people and as a person who is firm in my faith in our God, that I have no fear of the truth. Your Government and your Premier have nothing to hide, and we will be fully cooperative to ensure a transparent COI is carried out, thereby to ensure a just outcome.”

Further commenting on his “first-hand experience”, he made some suggestions that would further improve the inquiry.

“My first-hand observation is that transparency, efficiency and effectiveness can be enhanced if persons summoned to the appear before the Commission are advised of what subject they will be questioned on so that they can ensure they are prepared and they walk with the correct supporting documents and so forth. I am not saying that the Commission should tell the witness what exact questions they will be asked, but merely what topic areas they should come prepared to address – given that you are talking about 85,000 pages of information,” Premier Fahie explained.

He said it seems only fair to him to provide sufficient information and guidance to ensure that witnesses are fully prepared and equipped to assist the Commission in its quest for fairness and to uncovering the truth – whether the truth is good or ugly.

“But this is only my observation as a participant in the process, and it is up to the lone Commissioner to ultimately decide how he will conduct his Inquiry,” he remarked.
#CoI  #Hickinbottom  #Fahie  #the Virgin Islands