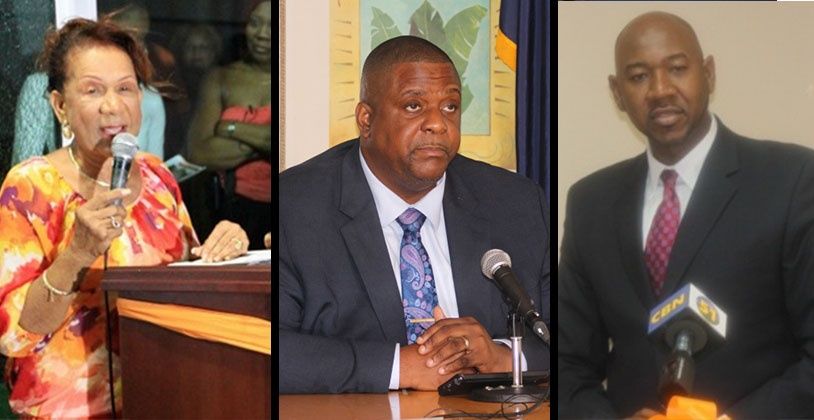 Premier and Minister for Finance Hon. Andrew Fahie has defended the lack of policy to shape the way board appointments were made in 2019 because his administration was a young one.

However he has assured the Commission of Inquiry (CoI) that moves are being made to strengthen good governance through legislation.

He was at the time responding to the reason why certain appointments were made despite his seemingly close ties to the individuals.

Attorney to the CoI, Mr. Bilal Rawat, pointed specifically to Mr. Bevis Sylvester and Ms. Patsy Lake being appointed to statutory boards, despite Sylvester being referred to as a ‘good friend’ and Lake as a ‘first cousin’ of the Premier.

Mr. Rawat told the Premier during his appearance on Tuesday, September 14, that there are instances where a minister has recused himself because a sibling, a family member including in-laws, has been proposed for a position. He reminded Premier Fahie of his earlier statements that the existing rules does not explicitly refer to a ‘good friend’ as in the case of Mr. Sylvester.

“Isn’t it the case that there is no consistent approach at present on the part of any member of Cabinet as to when and when not to declare?” Mr. Rawat asked.

Premier responded: “That would be a fair statement in that the terms of these have to be more defined, which is what we are working towards.”

He continued: “Now, given that this is an evolving situation and that is what part of our proposal was in terms of our statement that we made on good governance, adding in that layer inside of the Cabinet Office for the Cabinet Secretary is needed now that some of these things have come into question and the country is evolving more and more to safeguard all of us.”

Premier Fahie then sought to address the reason for Miss. Lake’s appointment.

“Even the first cousin part, in this country, for example, I have more than 75 first cousins and not because we are first cousins it means that they are close relationships. Miss Lake is 25 years older than me, so we never went to the same nightclubs, we have not worked together at all. We have a respectful relationship, not in the sense of being close personally, and she will be considered an extended family, and she is a national personality in fairness to why you would appoint someone like that. She is a successful entrepreneur," Hon. Fahie told the CoI.

We Were A Young Gov't

It was then that Mr. Rawat questioned the reason why the ministers did not draft a policy to try to address conflicts of interest.

“Hindsight is always 20/20. At that time, we were trying to pass the budget, and it might not be seen as much now of what we had to go through, the timeframe that should have been passed before the end of the year. So we were dealing with a lot of things at that time and other areas, and we also wanted to get a jumpstart in re-energizing the different boards, so we did not move in that direction at that time, and we didn’t even get to sit down because of COVID-19. But even in the midst of all of that, the evidence is there where we have now moved towards,” he remarked.

He added: “So we recognized after a while we have to further strengthen good governance in the territory in many areas. We were a young government. In hindsight, it is easy to say that, at that time, it was not something we fathom to do because we thought that with the advice we would have received from the AG and others that it would suffice. Given our experience now, we recognize what needs to be done.”

We Are Working On It

He said they are now working on remedying the situation so that future administrations do not have to face it.

“The Integrity in Public Life [Act], it already had its first reading in the House of Assembly and next week it will have its second reading, so these are not things that I am just saying. Once passed, that will take care of quite a bit of those areas. I know also on the 6th of April 2021, it was an information paper on the new era of accountability and transparency; the information paper I was talking about, it started to list out what we want to do with boards and how to move forward," Premier Fahie explained.

He said plans are also underway to transform the public service, the cabinet office and introduce necessary legislation in that regard.

Attorney Rawat then said cabinet members who are in doubt about declaring their interests is supposed to go to him [Premier] for direction and guidance.

“Ultimately, a person who should be in a position to advise ministers and members accordingly is the Premier, and if you have uncertainties, what hope is there for the other ministers?" he asked.

Premier replied: “Plenty hope under this auspices. As we grow the Virgin Islands, it should not be on the Premier’s shoulder to decide those things, that’s where the Ethics Unit of the Cabinet Office comes in. That should not be up to any elected official to do because the Premier now would only interpret whoever the Premier is, I am not saying it’s me, only interpret these to the best of his ability. If he is not a lawyer, it might not be interpreted in a way that Attorney Rawat just interpreted it.”

He insisted that there should be systems in place to handle these concerns.

“So there is great hope because we are already moving in that direction to further strengthen good governance in this area," the Territory leader stated.