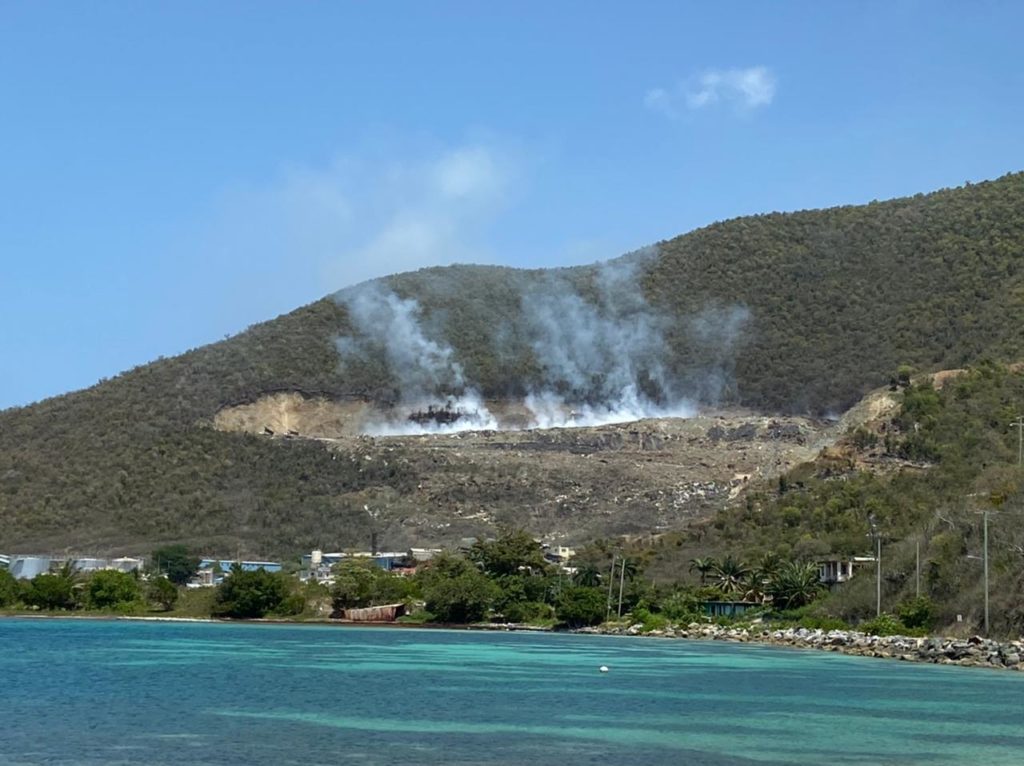 Minister of Health & Social Development, Marlon Penn has said intruders have been accessing dumpsites illegally and using blowtorches and similar devices to retrieve copper and other discarded items. This, he said, might be the cause of some fires at the Pockwood Pond Waste Disposal Site.

Speaking at the sitting of the House of Assembly yesterday, Penn said there were two large fires this month at Pockwood Pond dumpsite. They occurred on the evening of May 16 and the morning of May 22. He said no one was injured and there was no damage to public or private equipment on site.

However, the smoke from the fires was a source of discomfort for many residents on the western side of Tortola.

“While the exact cause of the dumpsite fire that occurred on the 16th of May has not been established, the Department of Waste Management has uncovered evidence of persons illegally accessing the dumpsite after hours and using blowtorches or similar devices to retrieve copper and other metals from discarded items. Given the high concentrations of methane gas on-site, any form of intense heat applied in close proximity increases the likelihood of fires erupting,” the minister said.

Penn strongly appealed to residents engaging in this activity to cease and desist immediately.

“Your actions are not only detrimental to safe operations at the dumpsite but also have a damaging impact on the wider community,” the Minister of Health said.

He said addressing this issue required a more proactive approach. Consequently, he will be seeking additional resources to put towards enhanced security measures such as reinstalling security cameras throughout the property and providing security guard coverage after operating hours.

“I would also like to remind everyone listening that the solid waste disposal facility at Pockwood Pond is open to the public daily from 6 am to 4 pm. Only operators contracted by the government to collect residential waste will be allowed to enter the facility after 4 pm,” Penn said.

The minister said the May 22nd fire resulted from spontaneous combustion when the unprocessed garbage at the site became ignited by hotspots smouldering underground.

“To reduce the incidence of spontaneous combustion at the dumpsite, I am seeking additional resources to meet the need for adequate daily supervision of the operations on site. We are also seeking to divert a larger volume of combustible materials from the waste stream by expanding our recycling programmes in collaboration with Green VI and other partners,” Penn stated.

Meanwhile, Penn said the incinerator remains offline because of mechanical failure and extensive damages caused by the fire that took place on February 14. That blaze destroyed the incinerator’s main control panel along with tis electrical system and contributed to material fatigue in certain sections of the building.

The Minister said his ministry is in the process of procuring the necessary replacement parts from the equipment manufacturer, Consutech Systems LLC.

“The company had already been contracted to supply a replacement Quench Tank and Ash Conveyor, along with a Heat Exchanger and three (3) Transfer Rams; all of which would be required to bring the Incinerator back online. Additionally, Madam Speaker, we are taking the necessary steps to purchase a factory replacement control panel, which is another critical piece of equipment,” Penn said.

He noted he has spoken with the President of Consutech Systems on May 23 and emphasized the importance of expediting the delivery of these critical items.

“It is important to bear in mind, however, that the process of fabricating, shipping, and installing the new parts will take several months; particularly in light of disruptions in the supply chain affecting key components,” Penn said.