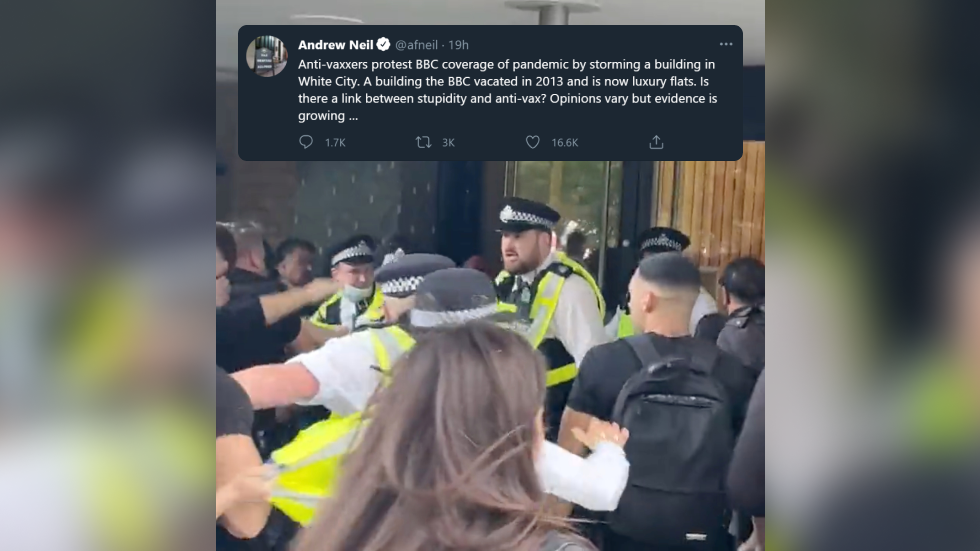 ‘Is there a link between stupidity and anti-vax?’ GB News boss & others goad anti-vaxxers after storming of former BBC HQ

The chairman of GB News is among those who mocked anti-vax and anti-lockdown protesters that stormed the former BBC headquarters on Monday, but some questioned the journalist, asking, “isn’t this your audience?”

On Monday, protesters, angry at the media’s role in perpetuating what they believe are mistruths about Covid-19, descended on what they seemingly thought was the BBC HQ at Television Studios in White City. Dozens of police can be seen in footage stopping demonstrators from entering the premises.

However, perceptive netizens were quick to point out that the protesters had congregated at the former BBC HQ, known as Television Studios. The national broadcaster moved out nearly a decade ago, with the premises primarily turned into luxury flats. The BBC retained some property at the site, leasing most of it out to ITV. When the protest started, ITV was filming ‘Loose Women’, a long-running chat show where a panel of women discuss pertinent topics from a women’s perspective.

“Not sure what protesters were hoping to achieve, but all they would’ve found was me, Jane, Nadia and Penny on @loosewomen talking about the menopause,” Loose Women presenter Charlene White said in a tweet.

The irony certainly wasn’t lost by the British media or those on social media. “Anti-vaxxers and anti-lockdowners don’t listen to MSM lies. They do their own research. Which is why they end up protesting against the BBC at a building the BBC left 8 years ago,” actor David Schneider jibed on Twitter, sharing footage from the protest.

Comedian and writer of iconic, yet ironic, football anthem ‘Three Lions’, David Baddiel praised the anti-vaxxers for their “amazing comedy work,” adding that he had avoided the BBC to not get stuck in traffic, only to hear the activists were at the old HQ.

GB News chairman Andrew Neil was among those who lambasted the protesters. Noting that the building had been vacated by the BBC in 2013, he tweeted: “Is there a link between stupidity and anti-vax? Opinions vary but evidence is growing.”

Neil, a former BBC presenter himself, clearly confused a few with his comments, as many contend his news channel is guilty of giving a platform to anti-vaxxers. Just last week, Scottish presenter Neil Oliver delivered a monologue on why he would “cheerfully” catch Covid-19 and would not worry about passing it on to others in the aim of restoring his freedom during the pandemic.

Some Twitter users responded to Neil, highlighting that Oliver is one of his employees. “They are literally your people. They are the target audience for @GBNEWS,” another wrote, as others suggested it would be good for the channel if he didn’t insult his target audience.

“I only know a few anti-vaxxers but they are all Brexiteers……just saying. They probably are also GB News viewers as well,” one social media user asserted.

However, some were more critical. Actor and model Matthew Marsden was among those who hit back at Neil. “Kinda like the stupidity in calling people ‘Anti-vaxx’, when they are being cautious about taking THIS vaccine, not any others,” he tweeted, adding the GB News boss’ comments were “disappointing.”

Marsden was not the only vaccine sceptic to slam Neil. One commenter accused the GB News boss of wanting the “creation of a Chinese Communist social credit system, based on medical apartheid.” He added that the protesters were not anti-vax but simply “vigilant individuals.”

The UK has seen several protests in recent months, with people protesting the opening of Covid-19 vaccines for children and the use of vaccine passports. Although disruptive, the protests have garnered less support than elsewhere in the world, with nearly 90% of British adults opting to get vaccinated against Covid.