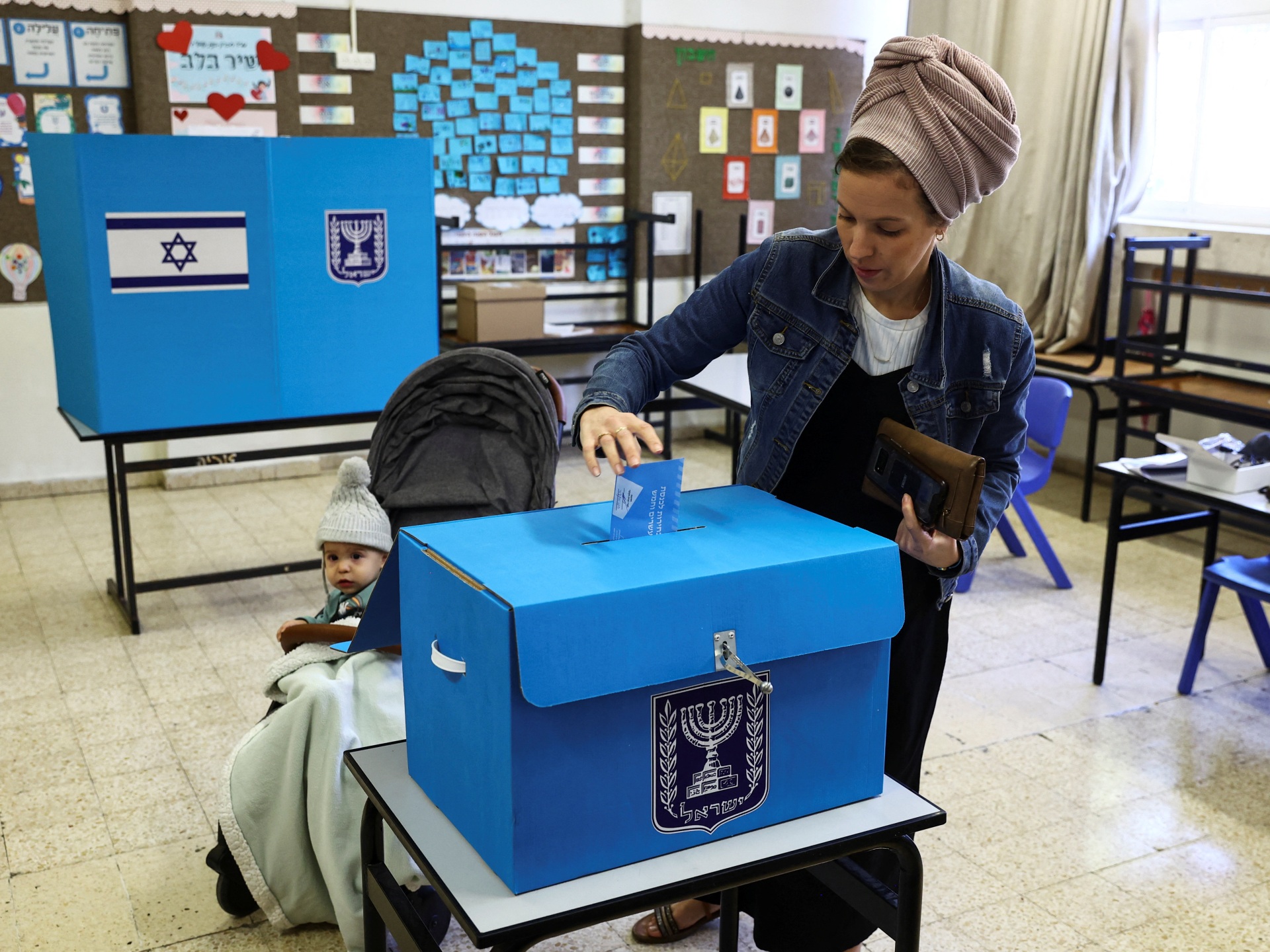 Voters are heading to the polls for the fifth time in three and a half years, but the country remains divided.

Israelis are back at the polls to vote in parliamentary elections for the fifth time in just three and a half years, with the race expected to be close between supporters of opposition leader Benjamin Netanyahu and his opponents.

It is unlikely, however, that either side will be able to command a large majority in the 120-seat parliament, with pre-election polls predicting a tight race.

Voting started at 7am local time (05:00 GMT) on Tuesday and will carry on until 10pm, giving the nearly 6.8 million people who have the right to vote plenty of opportunity to cast their vote.

“Is it the fourth or the fifth or the sixth election – I can’t keep track,” Yochi Hadad-Klapholtz, a mother of three in Jerusalem, told Al Jazeera, highlighting the dysfunctional nature of Israeli politics in the past few years.

The elections are the result of the collapse of the previous government and the dissolution of parliament in June after defections from the governing coalition made former Prime Minister Naftali Bennett’s position untenable.

That coalition, currently led by Yair Lapid, was formed by an unlikely combination of parties with conflicting views on everything from state and religion to the Israeli occupation and Palestinian statehood, LGBTQ rights, and economic policies.

What has united them was their fierce opposition to Netanyahu, who had served as prime minister for 12 years and is on trial for alleged bribery, fraud and breach of trust.

Netanyahu is keen to pass legislation that will prevent him from being tried.

In the previous election, held in March 2021, he midwifed a joint slate between two far-right Jewish politicians, which helped one of them, Itamar Ben Gvir, to get into the parliament, also known as the Knesset.

The other, Bezalel Smotrich, was already in parliament.

Smotrich has promised to legislate the removal of the offence of fraud and breach of trust from the criminal code if Netanyahu becomes prime minister.

He and Ben Gvir have also promised to strip the High Court of Justice of its ability to strike down unconstitutional laws. Ben Gvir plans to legislate a bill that would potentially expel Palestinian citizens of Israel not deemed “loyal” to the state.

Polls have suggested that Netanyahu’s far-right bloc may get 60 seats, with Lapid’s on 56.

In what might be a gesture towards the Hadash-Ta’al faction, Lapid said last week he intends to amend the contentious Jewish Nation-State Law.

The only limitation is the qualifying threshold of 3.25 percent of the total votes, the equivalent of four seats.

Three of the parties opposing Netanyahu, the Zionist left-wing Meretz party, the conservative Islamic Ra’am party and Hadash-Ta’al, may struggle to pass the threshold, leaving Lapid with no hope of forming a government.