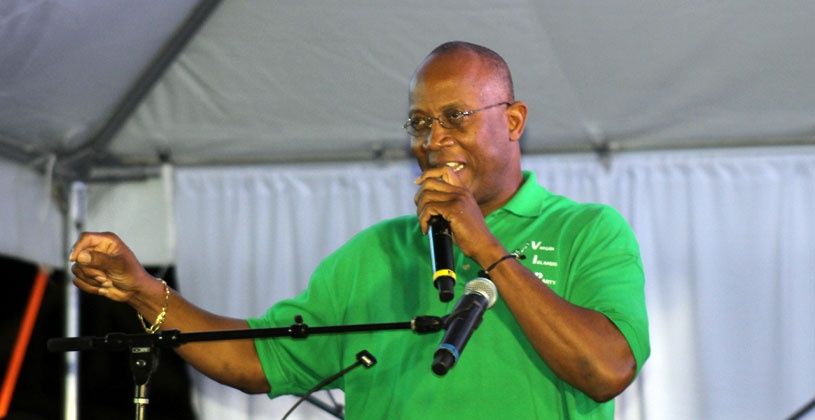 Mr. Claude Skelton-Cline, well-known talk show host and member of the clergy, questioned the reason why he was being grilled by the ongoing UK-backed Commission of Inquiry (CoI) again, relating to contracts that he had with government over the years, such as the controversial Neighbourhood Partnership Project.

Notably, Skelton-Cline had given evidence to the CoI before; however, when he was summoned to testify again today, October 4, he appeared to be irked.

I’m Not The Government

Counsel to the Commission Mr. Bilal Rawat told the clergyman that he intended to grill him again on the Neighbourhood Partnership Project however, Skelton Cline swiftly interjected and made his position known to the CoI.

In response, Commissioner Sir Gary Hickinbottom said: “Firstly, it is more than eight or nine years ago because time passes quickly. Secondly, you are absolutely right, it’s a good question because the focus of the CoI is on serious dishonesty in public office and governance and as you would know if you had read the Auditor General’s report that she regarded governance in relation to these particular contracts as very, very poor indeed."

Sir Gary said, "and we need to establish the background of the contract, what happened during, so I can consider governance in relation to the contract, and you are obviously an important part of that story.”

Skelton-Cline replied that he did not read the Auditor General’s report, but he understood that it was incomplete and stated that it was better if those questions were posed to the specific government entity.

He continued: “I am not the government, I am not an elected official, I am not a fiduciary of the government, I am not a trustee, so with all due respect, Commissioner I think, and I would like you to correct me on the record if I am wrong, I am the only private citizen in a private capacity that you have summoned to the CoI. I question that because it is too glaring to ignore! Which leads me to a conclusion because it feels like targeting and victimization to me in my private capacity as a private citizen.”

However, Commissioner Hickinbottom said he was wrong; there were other private citizens who have testified before the CoI.
“Secondly, the evidence that I have need to take properly to investigate governance and serious dishonesty in public office is a matter for me,” he pointed out.

The Commissioner further said: “ but at the moment there are serious suggestions in the evidence of really, really poor governance and some of those suggestions relates to some of the matters in which you’ve been involved, and I need to drill into those matters and you can help me do that.”

Skelton-Cline replied: “well, with all due respect Commissioner the best space and place you can drill into that is the government or the particular entity of wherever the particular contract may be, not me and the reason you are going to feel some resistance on the private contracts.”

He also pointed out that on more than one occasion, he heard Mr. Rawat invoke his name with former ministers Mark Vanterpool and Myron Walwyn.

“In a way I think is willful and wicked; and it is unacceptable to me as a private citizen in my private capacity as a husband, as a father, as a clergyman in this community, in a very small community where these things are disbursed throughout the airwaves that leaves inferences and innuendos, and that is deeply concerning to me, and I feel like the Commission in this case, you have allowed some of that," Skelton-Cline said.

He said the Commission knows that he has no decision making instrument or position relative to whether it was the Neigbourhood Partnership, “whether it was the contract with the then Minister for Communication and Works or whether it is the current contract now through the Ministry of Finance and the Premier’s Office.”

He continued: “I don’t create invoices, I don’t draft contracts, I don’t set out all the terms of the agreement, I agree in the end to deliver certain things, I am not a permanent secretary or an accounting officer, that sends stuff to treasury," he said.

SKelton-Cline added, "if at any time that the government or one of those agencies felt that they were not receiving deliverables, they are conditions in the contract in which they could be terminated on both sides, that did not happen. I am not going to allow myself Mr. Commissioner, in my private capacity to come through here; I must tell you it feels like theatre; it feels like a public lynching.”

Skelton-Cline further said the best way he could assist the CoI is in a private setting.

Despite his rant, Skelton-Cline still gave evidence to the CoI in the live hearing which is currently underway.