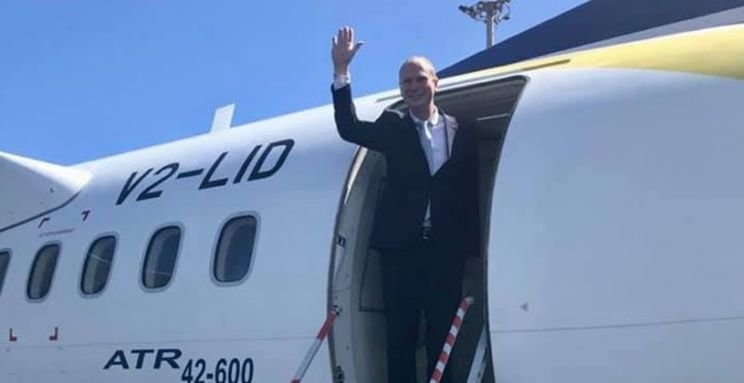 Premier and Minister for Finance Hon. Andrew Fahie said former Governor of the British Virgin Islands, Augustus Jaspert will be remembered in history and commended him on his work during his roughly four-year stint as the territory’s Governor.
“We have worked hard together in Cabinet… we have seen quite a bit, and he will be remembered in the archives of history for the one who fulfilled his purpose to help force us into eventual self-determination of our people to help for us to realize that we can take nothing for granted and for us to realize that we must continue to develop,” Premier said to the media following the brief parting ceremony for Jaspert on Saturday.

Premier Fahie then wished Jaspert well in his future pursuits.

“I wish Governor Jaspert all the best that he would fulfil his purpose as God has placed him here to fulfil. He has played the role that God has allowed him to play in the Virgin Islands extremely well. I just wish that wherever he goes, he will fulfil the purpose that God placed him there to fulfil.”

Notably, during Jaspert’s tenure, he and Premier Fahie had been at constant loggerheads on various issues.

The most recent is the Commission of Inquiry (CoI) that Jaspert launched before his tenure expired. The CoI is an independent probe, headed by UK Judge Right Honorable Gary Hickinbottom, to unearth whether there is any truth behind the myriad of allegations into corruption and victimization in government offices and statutory bodies among other areas.

The former Governor extended his gratitude to everyone for their support.

“It has been an honour and an absolute privilege to serve this territory through these years. I know it has not always been easy, but I hope I have done my work to the best of my ability and I couldn’t have done that without all of the people here who have supported me and supported the territory over those years,” he said to a small gathering outside the Governor’s Office.

“I will never forget the territory, its people, you will always be in my heart, and I wish you all well, and I wish the territory well,” he added.
#CoI  #Hickinbottom  #Commission of Inquiry  #Fahie  #the Virgin Islands