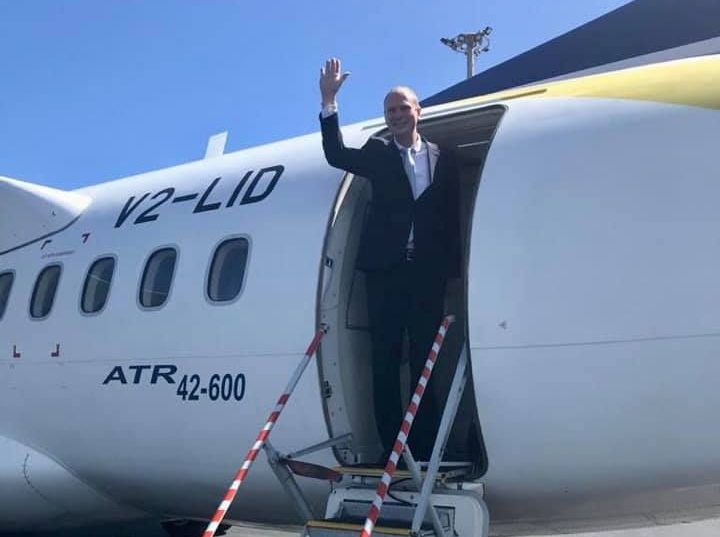 In a small, private ceremony with the premier, staff and police officers, Governor Gus Jaspert said his farewell to the Virgin Islands and boarded a plane on last Saturday.
Deputy Governor David Archer Jr. was sworn in as acting governor immediately after Mr. Jaspert’s departure, and the new governor, John Rankin, was sworn in yesterday.

During Mr. Jaspert’s departure ceremony, which was broadcast on Facebook, he bumped elbows with Premier Andrew Fahie, Cabinet Secretary Sandra Ward, other officials and his staff members in front of the Governor’s Office.
Police Commissioner Michael Matthews handed him the territory’s flag as a departing gift.

“Carrying this flag means a lot to me because it has been an honour and absolute privilege to serve this territory through these years,” Mr. Jaspert said during a brief speech. “I will never forget the territory, its people, and all ofyou, and you will always be in my heart.”

Premier Andrew Fahie also made some remarks to the camera during the live recording.

“I just want to wish Governor Jaspert all the best. He has played the role that God allowed him to play in the Virgin Islands extremely well,” Mr. Fahie said, adding, “He will be remembered in the archives of the history for the one who fulfilled his purpose to help force us into eventual self-determination of our people; to help us realise that we can’t take nothing for granted and help us realise we have to continue to develop.”

Mr. Matthews recalled working with the governor, especially during the aftermath of Hurricane Irma in 2017.

“For me, he’s been extremely supportive of the Royal Virgin Islands Police Force,” he said.

Others also shared brief words of gratitude and well wishes during the live recording, and many said they would miss Mr. Jaspert.
#John Rankin  #Fahie  #Facebook  #the Virgin Islands