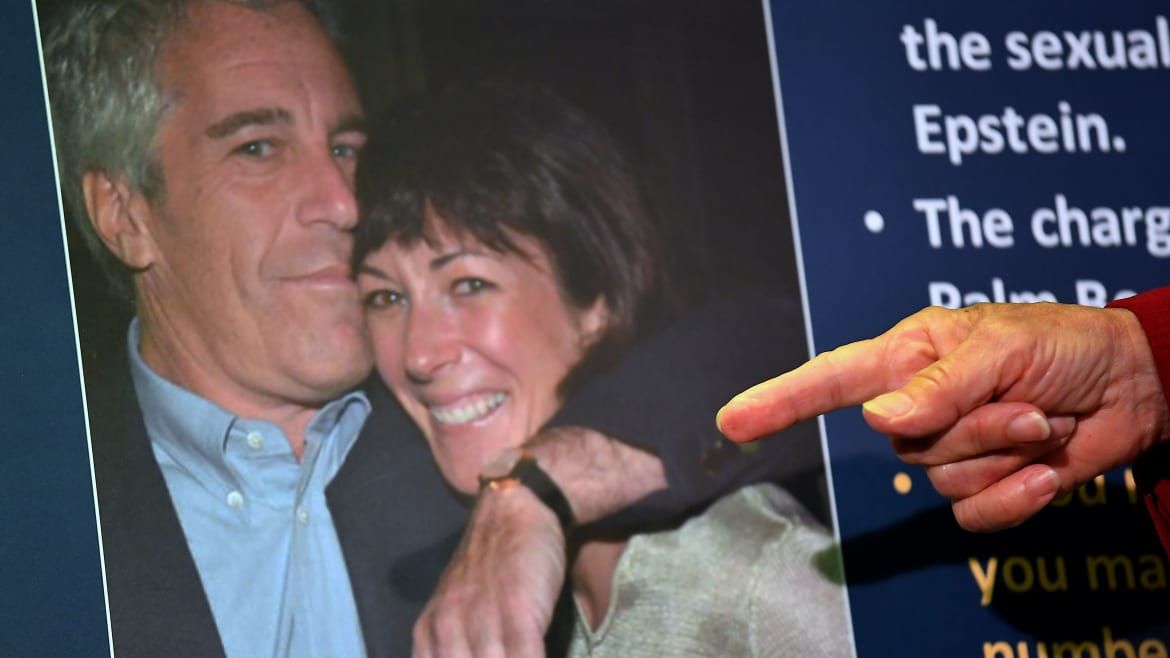 The same unnamed man “was in tears as he recounted [Maxwell] bringing a 15-year-old girl to his employer’s home who, in utmost distress, told him that [Maxwell] stole the young girl’s passport and tried to make her have sex with Epstein and then threatened her.”

Jeffrey Epstein Accuser Names Powerful Men in Alleged Sex RingThe disturbing allegations emerged in thousands of court documents that were unsealed in a lawsuit against Maxwell by Epstein accuser Virginia Roberts Giuffre, who says the duo loaned her out for sex with powerful men, including Britain’s Prince Andrew. (Maxwell and Andrew have denied her claims. Epstein killed himself in jail in 2019 after being charged with crimes related to the sex trafficking of minors.)

The lawsuit was settled in 2017, and a court has since ordered the release of many of the documents under seal, despite Maxwell’s protestations. The British heiress was nabbed by the FBI in July 2020 while laying low at a swanky New Hampshire hidey-hole and is awaiting trial for having allegedly facilitated Epstein’s sex-trafficking ring.

The unsealed documents paint a portrait of Maxwell at the center of Epstein’s web of abuse. A second witness testified that Maxwell had “recruited her from her school campus to have sex with Epstein with lies about being her personal assistant.”

Another testified that Maxwell would “call him and ask him to bring over young girls that she would provide to Epstein.” And two other witnesses-who were subpoenaed by Maxwell for her own defense-ended up giving testimony to support Giuffre, with one stating “he witnessed [Maxwell] escort young girls he brought over to Epstein’s home to Epstein for sex acts and… that [Maxwell] called him on the phone, asking him to bring over girls to Epstein’s home.”

Lawyers for Giuffre insisted this testimony was a smoking gun pointing to Maxwell’s central role in Epstein’s underage sex ring.

“Now, there is actual, live testimonial evidence that [Maxwell] was a procurer of young girls for sex with Jeffrey Epstein, with whom she shared a home and a life, thus validating Ms. Giuffre’s claims.”Giuffre has long claimed that Maxwell was central to her introduction to Epstein and other powerful men in his orbit. Maxwell allegedly recruited her to give “massages” to the financier while Giuffre was working at Mar-a-Lago, and a photo of Giuffre with Prince Andrew—the royal grinning as he cradled the girl’s waist—also showed Maxwell smiling in the background. (Maxwell, whose father was a British publishing magnate, knew Andrew socially and introduced Epstein to her glittering circle of elite connections when they started dating in the early 1990s.)

“Ghislaine Maxwell brought me into the sex trafficking industry,” Giuffre asserted during her deposition in the lawsuit. “She’s the one who abused me on a regular basis. She’s the one that procured me, told me what to do, trained me as a sex slave, abused me physically, abused me mentally.

She’s the one who I believe, in my heart of hearts, deserves to come forward and have justice happen to her more than anybody. Being a woman, it’s disgusting.”

Giuffre also testified that she had begged an FBI agent to return to her any photos or video recordings of her that the agency had collected in its investigation of Epstein in the late 2000s—emailing the agent to ask him to “assist our case further in [proving] how much pedophilia occurred by Jeffrey and the many other monsters he obliged with underage girls.”

After Giuffre’s bombshell allegations about Prince Andrew first appeared in the press, she says Maxwell launched a smear campaign against her.

In a motion for a protective order to keep police reports disseminated by Maxwell confidential, Giuffre claimed that Maxwell “somehow came into possession of police reports depicting the crime of rape [by other, non-related attackers] committed against Ms. Giuffre when she was fourteen years old.” Giuffre claims Maxwell attempted “to twist and contort the facts in these police reports to tell the public that Ms. Giuffre ‘cried rape’ as a fourteen-year-old.” Giuffre asserted that she never went to police about that rape and that “instead, the police came to her based on their investigation and the accounts of third-parties.”

Maxwell “is trying to further wound Ms. Giuffre, simply because the sexual crimes committed against her as a child,” the documents state.The filing includes a screenshot of an email sent to Maxwell in 2015, from a sender whose name is redacted. The email, with the subject line “VR cried rape,” contains the very brief message: “Some helpful leakage…”

The filing goes on to accuse both Maxwell and Epstein’s lawyer Alan Dershowitz of “planning another media blitz in an attempt to discredit and defame Ms. Giuffre” and says Maxwell was “teaming up” with Dershowitz in a “frantic attempt” to discredit Giuffre and “humiliate her family.” (Giuffre has also accused Dershowitz of sexually abusing her; he has denied the claims.)Indeed, in other court records, Maxwell went out of her way to slam Giuffre as “a liar, a person who falsifies claims of sexual assault, and a sexually permissive woman... [with] substantial mental and medical conditions.”

Maxwell denied that she had ever hired underage girls for massages for Epstein, claiming in her own deposition that she “on occasion met with adult, professional women and men who were employed at high-end spas or resorts and asked whether they made home visits for the purpose of massages.”

She testified that she did not recall “the names of those persons who ended up making professional, adult home visit massages that occurred between the years 2000 and 2002... Ms. Maxwell has contacted a number of professional masseuses from spas in various locations, including New York, Palm Beach, and the U.S. Virgin Islands, to provide professional, adult massages to be given to Jeffrey Epstein.”

The socialite also claimed that she had never “to her knowledge” recruited, hired, or obtained any female “who was not at the time a certified or licensed massage therapist for the purpose of having that female perform a massage on Jeffrey Epstein,” nor recruited or obtained “girls to meet with, or show themselves, to Jeffrey Epstein because he was in some way associated with Victoria’s Secret.”Epstein’s main client as a financial adviser was Leslie Wexner, mogul of the parent company that owned Victoria’s Secret, and Epstein’s victims have claimed he promised them high-profile modeling gigs as he groomed them for abuse.

Victoria’s Secret Mogul May Finally Have to Explain His Epstein TiesThe modeling agency also cropped up in testimony from retired Palm Beach detective Joseph Recarey, who was one of the earliest officials to pursue the case against Epstein. In his deposition, Recarey noted that he’d interviewed some 30-33 girls recruited to give massages at Epstein’s Florida mansion, the majority of whom were under 18.

“Each of the victims that went to the home were asked to bring their friends to the home,” Recarey testified.

“Some complied and some didn’t.” He added that Epstein’s assistants would call and arrange for the girls to come over to give the massages. When asked to confirm that Epstein was running a scheme by using his assistants to recruit girls under the pretense of giving a massage, Recarey replied, “Correct.

Either a [massage] and/or become a model for Victoria’s Secrets and/or connections.”“Did you ever trace all the way up to the highest level to determine who was it that started this particular chain of Palm Beach girls coming over to Jeffrey Epstein’s home?” Giuffre’s lawyer asked the detective.