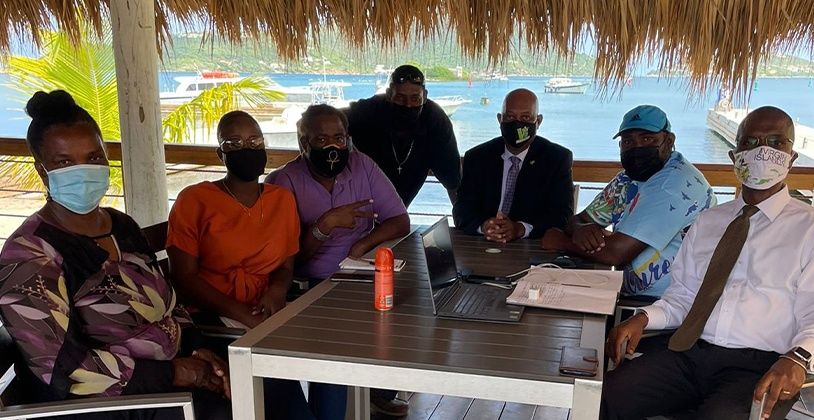 The government has announced that a Land and Marine Estate Policy will serve as the framework to resolve the long-standing issues of land distribution and the claims of ancestral lands on the sister island of Anegada.
In a press release government stated that, the way forward in addressing the issues came about during a meeting held yesterday Tuesday, October 26 between representatives from the Ministry of Natural Resources, Labour and Immigration and those of the Anegada Advisory Lands Committee.

It explored how the governance of land matters and the settlement of outstanding land claims can feature prominently into the update of the Land and Marine Estate Policy of the Virgin Islands.

Notably, during a community meeting held over the weekend, residents raised their continued concerns over land matters. They also said that said the lands committee had been established since July 2020, and they have been fighting for the cause on behalf of residents, but to no avail.

Residents told elected representatives that they were willing to come to a compromise on the way forward; however, “If you don’t do what you say you going to do, you will see fed-up? Fed-up down here! …Anegada going through a holocaust for 146 years, and this thing ain't done yet?”

However, in the government’s press release yesterday, Minister for Natural Resources, Labour and Immigration Hon. Vincent Wheatley said that the Ministry has endeavoured to produce policy that not only reflects the challenges facing land matters but also presents solutions to issues that have spanned decades.

“Since taking office I have been confronted with numerous unresolved land matters, however, none of the matters were as complex or as long standing as the Anegada Lands issue,” he said following yesterday’s meeting.

He said: “Today I am pleased to say that working very closely with the Anegada people and the Anegada Lands Advisory Committee, there is light at the end of the tunnel. Much work is yet to be done but we remain committed to resolving this matter.”

Acting Permanent Secretary in the Ministry of Natural Resources, Labour and Immigration Mr. Joseph Smith-Abbott assured of the Ministry’s commitment to a well-developed lands policy that will benefit the Anegada people.

Mr. Smith-Abbott said, “The Ministry stands ready to ensure that the Land and Marine Estate Policy accurately reflects the aspirations and needs for a modern and responsive framework for the governance and management of lands on Anegada, respecting the historical claims and need for a partnership founded on the principles originally enshrined in the Renwick Report of 1988.”

The Chairman of the Anegada Advisory Lands Committee Mr. Darrell Ruan Jr. expressed the importance of the day’s meeting with the Minister and Permanent Secretary by saying, “I can attest that the solutions presented during this meeting are going to catapult Anegada into a new paradigm.”

According to government, yesterday’s meeting was one in a series of meetings held between Government and the Anegada Advisory Lands Committee with the mission being how to effectively facilitate the land distribution programme.
#the Virgin Islands