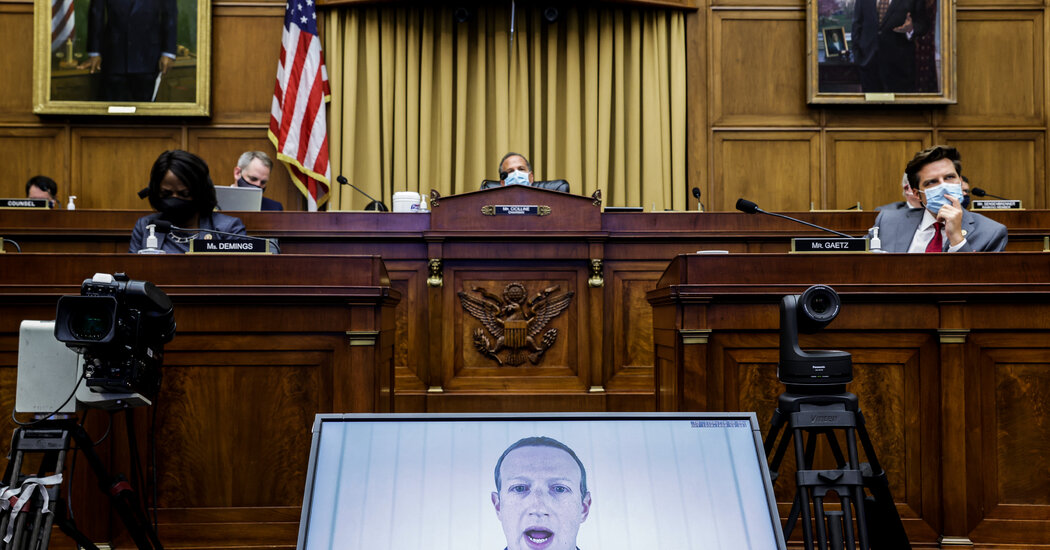 Lawmakers, United in Their Ire, Lash Out at Big Tech’s Leaders

The chiefs of Amazon, Apple, Google and Facebook faced withering questions from Democrats about anti-competitive practices and from Republicans about anti-conservative bias.
The chief executives of Amazon, Apple, Google and Facebook, four tech giants worth nearly $5 trillion combined, faced withering questions from Republican and Democratic lawmakers alike on Wednesday for the tactics and market dominance that had made their enterprises successful.

For more than five hours, the 15 members of an antitrust panel in the House lobbed questions and repeatedly interrupted and talked over Jeff Bezos of Amazon, Tim Cook of Apple, Mark Zuckerberg of Facebook and Sundar Pichai of Google.

It was the first congressional hearing for some time where Democrats and Republicans acted as if they had a common foe, though for different reasons. Democratic lawmakers criticized the tech companies for buying start-ups to stifle them and for unfairly using their data hoards to clone and kill off competitors, while Republicans questioned whether the platforms had muzzled conservative viewpoints and were unpatriotic.

“As gatekeepers to the digital economy, these platforms enjoy the power to pick winners and losers, shake down small businesses and enrich themselves while choking off competitors,” said Representative David Cicilline, Democrat of Rhode Island and chairman of the House Judiciary Committee’s antitrust subcommittee. “Our founders would not bow before a king. Nor should we bow before the emperors of the online economy.”

In response, Mr. Pichai, Mr. Zuckerberg, Mr. Cook and Mr. Bezos, who testified via videoconference because of the coronavirus pandemic, were forced to strike a more humble chord. They presented themselves as participants in enormously competitive and fast-changing digital marketplaces, and they evaded questions about the decisions that turned their companies into giants.

“We approach this process with respect and humility, but we make no concession on the facts,” said Mr. Cook at the outset of his testimony.

Not since Microsoft stood trial in the late 1990s for antitrust charges have tech chief executives been under such a microscope for the power of their businesses. With echoes of the trustbusting of U.S. Steel and Standard Oil more than a century ago and AT&T in 1984, the hearing underlined the government’s recognition that this cohort of tech companies — which wield immense control over commerce, communications and public discourse — had become the new trusts of the internet age.

President Trump also used the event to rail against tech power. In a post on Twitter before the hearing began, he said that he would issue executive orders to rein in the companies if Congress did not.

From its conception, the House antitrust hearing was set to be a spectacle, lining up four of the world’s most powerful executives — with two of them among the planet’s richest individuals — to answer largely hostile questions together. While the joint appearance limited sustained questioning of any one executive, it created a side-by-side image that recalled the 1994 congressional hearing of top American tobacco executives, who said they did not believe that cigarettes were addictive.

House lawmakers, who had opened an investigation into the tech companies in June 2019, made the most of it. Representative Jerry Nadler, Democrat of New York, confronted Mr. Zuckerberg with the C.E.O.’s own emails, saying they showed a plot to take out a young competitor. Representative Jim Jordan, Republican of Ohio, said Google was biased and asked Mr. Pichai whether the company would change its products to help elect Joseph R. Biden for president.

In one of the sharpest exchanges, Representative Pramila Jayapal, a Washington Democrat, confronted Mr. Bezos on accusations that an Amazon lawyer had lied to the committee about how the company develops its own products. She asked him to answer whether it misused data with a yes or no.

“I can’t answer that question yes or no,” said Mr. Bezos, appearing rattled.

Yet while the hearing was ripe with theater, any impact will be limited by antitrust laws that were created a century ago and that are imperfect for corralling internet firms. Since the 1980s, enforcement officials have used the notion of consumer welfare as the predominant test for antitrust violations — generally meaning that if prices are not going up, the markets are most likely competitive enough. The tech giants have generally not driven up prices of digital services or consumer goods; many do not charge at all for services like Google Maps or Instagram.

While Democrats at the hearing indicated they were more inclined to change antitrust law, Representative Jim Sensenbrenner, Republican of Wisconsin, said he did not think the laws needed to change. Ultimately, Congress doesn’t have the power to break up the companies.

Still, the proceedings provided fuel to other investigations of the tech companies by the Justice Department, the Federal Trade Commission and state attorneys general. The Justice Department is expected to soon announce charges against Google accusing it of abusing its dominance in online advertising, people with knowledge of the investigation have said. The F.T.C. is preparing to question Mr. Zuckerberg under oath in its investigation of Facebook’s grip over social networking and acquisitions of nascent rivals.

“This is a critical juncture in how the Washington policy clash with the titans of Silicon Valley unfolds,” said Gene Kimmelman, a former Justice Department antitrust official and a special adviser to the consumer advocacy group Public Knowledge.

Regulators around the world are also moving to limit the power of the tech giants. Europe has led the charge with antitrust investigations and Margrethe Vestager, the region’s top trustbuster, recently vowed to take a harder line on the companies. On Wednesday, Turkey passed legislation giving its government sweeping new powers to regulate social media content.
The hearing on Wednesday was a turnabout from just a few years ago, when Facebook, Google, Amazon and Apple were emblems of national pride for their innovation and growth. But the expanding reach of the four — which are involved in everything from smartphones to e-commerce to digital payments — and their stumbles in misinformation, privacy, election interference and labor issues have increasingly raised hackles.

Even so, the companies have continued growing as more people live their lives online, with all of them expected to post solid financial performances when they report quarterly earnings on Thursday.

The hearing was made more bizarre by Mr. Bezos, Mr. Cook, Mr. Pichai and Mr. Zuckerberg dialing in remotely using Cisco’s Webex videoconferencing service. Lawmakers — who mostly appeared in person wearing masks in a House hearing room — faced empty chairs and a jumbo screen with the faces of the executives, who looked soberly into their cameras.

Lawmakers nonetheless drilled down on key moments when the companies had gained power or allegedly squeezed consumers, competitors and small businesses. They directed most of their questions to Mr. Zuckerberg and Mr. Pichai, then to Mr. Bezos, according to a tally by The New York Times. Mr. Cook was asked the fewest questions.

The tone of the hearing was set with Mr. Cicilline’s very first question, directed at Mr. Pichai. “Why does Google steal content from honest businesses?” Mr. Cicilline asked. Mr. Pichai replied: “Mr. Chairman, with respect, I disagree with that characterization.”

Mr. Pichai was repeatedly asked about Google’s dominance in search and how the company was potentially trying to keep users within “a walled garden.” He said Google had many competitors for specific categories of search, such as shopping.

Mr. Zuckerberg was asked about Facebook emails where executives discussed the company’s 2012 acquisition of Instagram as a possible strategy to take out a nascent competitor. Mr. Zuckerberg said that, in fact, Instagram’s success had never been guaranteed and was the result of Facebook’s investment in the product.
When lawmakers asked Mr. Bezos if Amazon had bullied small merchants, he said that it was “not how we operate the business” — before being confronted by an audio recording of a bookseller begging him directly for relief.

In response to questions about whether Apple favored some app developers over others, Mr. Cook said there were “open and transparent rules” that applied “evenly to everyone.”

David Heinemeier Hansson, the co-founder of Basecamp, a project-management company that has battled with both Google and Apple over their market power, said the hearing would be irrelevant if the government did not act to rein in the tech giants.

“What we ultimately need is relief. We don’t just need a historic moment. We need this to lead to legislation and regulation and enforcement,” he said.

But, Mr. Heinemeier Hansson added, “thankfully I’ve never been more optimistic for that than I am right now.”