Monetary pledges from legislators and senior functionaries of the Recovery and Development Agency (RDA), along with the signing of contracts, have paved the way for the reconstruction of the Elmore Stoutt High School (ESHS) campus.

Yesterday, December 2, 2021, Trojan Design and Development Limited signed a contract for design consultancy services to the sum of $99,480 while Sand Wise Limited, awarded a $136,079.50 for demolition and debris removal, also signed their contract at a ground hammering ceremony.

The events yesterday heralded progress towards the construction, which will ultimately see the full school being back at its official location, in addition to bringing to an end shift systems currently in place.

Legislators of both Government and the Opposition were on hand to witness the signing when they made financial pledges toward aspects of rebuilding the school. 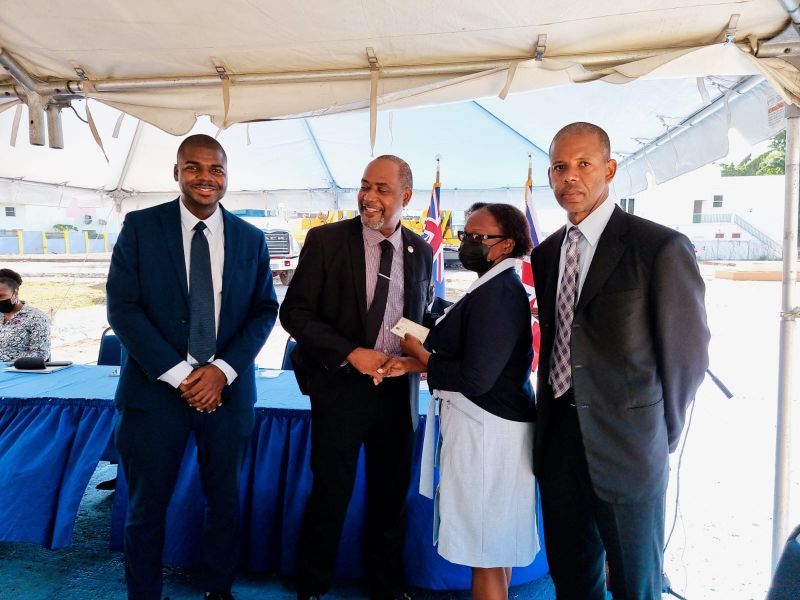 The events yesterday heralded progress towards the construction, which will ultimately see the full school being back at its official location, in addition to bringing to an end shift systems currently in place.

This was kicked off by Deputy Speaker Honourable Neville A. Smith handing over a cheque for $15,000 to the Principal of ESHS and the RDA.

Some $7,500 was pledged on behalf of Acting Chairman of the RDA Mr Anthony A. McMaster and family.

Meanwhile, Minister for Health and Social Development Honourable Carvin Malone (AL) committed the Graduating Class of 1976 to raise some $30,000 to donate.

These and other donations, along with the contracts signed and monies already in the coffers, are expected to see the reconstruction of the school in time for the start of the 2022 - 2023 school year.

Premier and Minister of Finance, Honourable Andrew A. Fahie (R1) stated that the initial phases will see the construction of three two-storey buildings as a start on the eastern side of the ESHS campus.

This will be utilised in the longer term beyond the repatriation of the senior students in an acceptable classroom environment for Maintenance, Science and Technical Schools respectively.

“The buildings will be incorporated into the permanent master plan for ESHS campus."