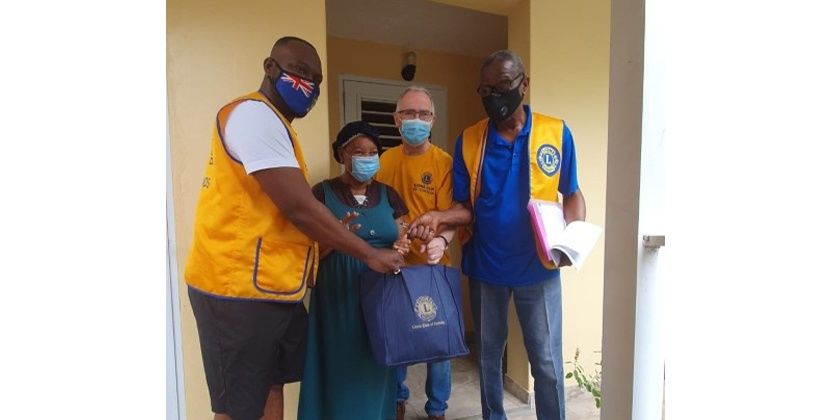 Lions Club Delivers Over 120 Food Packages To The Needy, Elderly

The Lions Club of Tortola on Saturday, December 18th conducted an island-wide delivery of more than 120 food packages to the needy, shut-ins and elderly across Tortola.

The food packages were donated by members of the public during a series of food drives at various local supermarkets in November as well as from corporate sponsors.

President of the Tortola Lions Club, Mr. Kevin Fahie said the packages consist of staple food items and the beneficiaries were selected based on their needs by members of the club or from the public who are aware of persons in dire need.

“It is a great opportunity for the club especially having the Governor here this morning and seeing the look on his face as we give food to these individuals. Some of them you could see their dire need and as small as that bag is you could tell that, that bag will go a long way for some of these families.”

He continued: “So it is a great initiative, I think we are definitely going to touch some families today with the food drive.”

The Club’s President informed that the Social Development Department and Family Support Network are also slated to receive donations.

In the meantime, the club will be moving towards the Toy Drive on Christmas Eve, December 24th, “first thing in the morning.”

He informed that the club will be moving from community to community to hand-deliver the gifts to children on a lively Christmas musical train.
President Fahie said the gifts will be split in half with Tree of Hands a non-profit organization headed by Alexandra Durante.

Tree of Hands will be delivering gifts on the eastern end of Tortola while the Club will handle the western end of the island.

He said the Club is hoping to deliver at least over 1,000 gifts.

Companies like FLOW, RTW, CITCO, Maples, Alphonso Warner Insurance Agency, Conyers among others, as well as from Governor John Rankin have donated gifts to the cause.

In the case of the Governor’s donation, during a recent social event held at the Governor’s House, attendees were asked to consider bringing a toy and these donations were later delivered to the club.