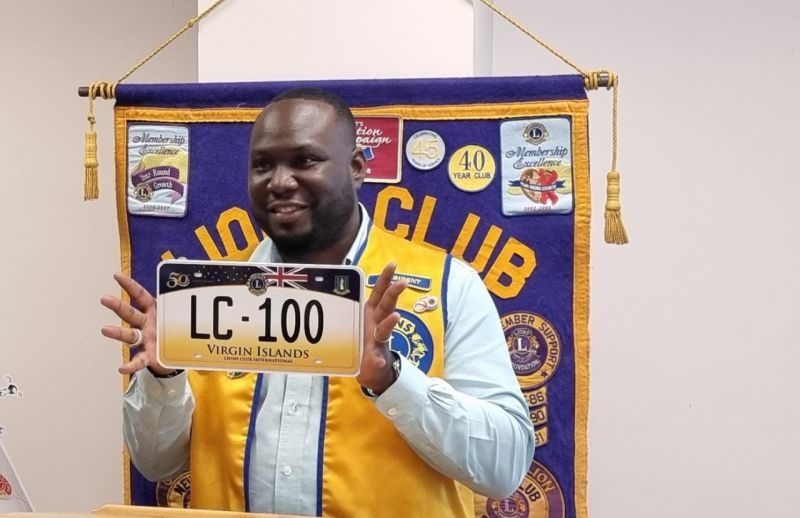 The Lions Club of Tortola, which was chartered on April 27, 1972, has launched a Commemorative Motor Vehicle Registration Plate as part of its 50th Anniversary Celebration in the Virgin Islands.

The launch of the commemorative plate was done at Caribbean Cellars Limited on Wickham's Cay II on Wednesday, April 27, 2022.

During the unveiling of the plate, President of the Lions Club of Tortola Kevin S. Fahie said orders can now be made at the Department of Motor Vehicles at Pockwood Pond.

"We encourage persons to go down to DMV [to] purchase a plate, we want to flood the BVI with Lion's Club plates. We see all the other clubs with their plates out there and they look lovely but now it's time for the Lions..."

The commemorative plates cost $150 a pair and proceeds will go towards projects of the club.

Members of the Lions Club of Tortola at the launch of the Commemorative Motor Vehicle Registration Plate as part of the club's 50th Anniversary Celebration in the Virgin Islands. The launch was done April 27, 2022.

Cabinet had on March 30, 2022, decided that a maximum of one hundred (100) pairs of commemorative plates for the 50th Anniversary of the Lions Club of Tortola be issued.

Cabinet had also stated that as part of the revenues generated, the Ministry of Transportation, Works and Utilities will pay a maximum of $10,000.00, at a rate of $150.00 per pair of plates, to the Lions Club of Tortola from the revenue generated by the sale of the plates, with the difference of five thousand ($5,000.00), at a rate of fifty dollars ($50.00) per pair of plates (25%) of the total sales, to be retained by the DMV towards the administrative costs of procuring the stock of plates.

Meanwhile, the Lions Club of Tortola has also planned several activities in celebration of its 50th anniversary.

This includes a church service, a basketball camp for children, and a fundraising gala dinner.