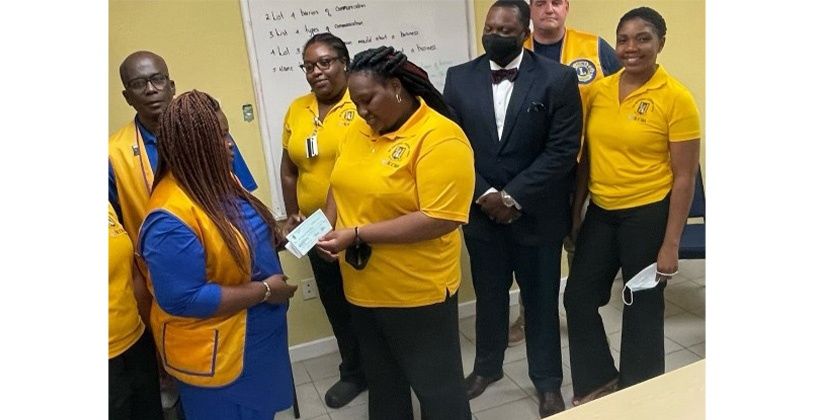 The Lions Club of Tortola has donated $5,000 of proceeds from a fundraising event held recently towards the BVI National Culinary Team, to assist in their participation in the 2022 Taste of the Caribbean Competition in the United States.
According to a press release, the culinary event – Taste and Serve BVI – was hosted by Governor, John J. Rankin, at Government House on World Food Day, observed on October 16.

Apart from the food and drink aspect, there was also a silent auction.

“This event was the first of its kind for the Club, and we are extremely grateful for the partnerships of His Excellency, the Governor, the BVI National Culinary Team, and our numerous contributing sponsors in helping the Lions Club of Tortola to achieve our goal. We especially thank our patrons who attended and supported this cause,” First Vice President of the Lions Club, Kamika Forbes, said.

She also mentioned that the remaining $13,000 raised during the event will go towards community service projects organized by the Club.

The check was presented to the BVI Chamber of Commerce and Hotel Association (BVICCHA) on behalf of the culinary team on November 2.

“I’m immensely proud of this team. This was the first time I’ve seen them in action since becoming the Executive Director. They’ve had many events planned and made several attempts to implement plans, only to see events cancelled due to the current state of the world. They didn’t lose focus. They stayed connected and forged ahead,” Executive Director of the BVI CCHA, Keiyia Jackson-George, commented.

Commenting on behalf of the Governor, Deputy Governor Mr. David Archer Jr. said the Governor spoke highly of the event and believed that it was critical for the Governor’s Office to aid in the fundraising effort.

“We happen to be in Cultural and Tourism Month, and what more represents BVI culture than our food. We know that the BVI National Culinary Team is quite successful and has been a part of a long tradition where we have always done well,” the Deputy Governor further said.

The Club is now planning to add this event to its list of signature events held on an annual basis due to the ‘overwhelming response received,” the release added.

It was mentioned that a number of corporate sponsors assisted the club.
#the Virgin Islands  #John J. Rankin