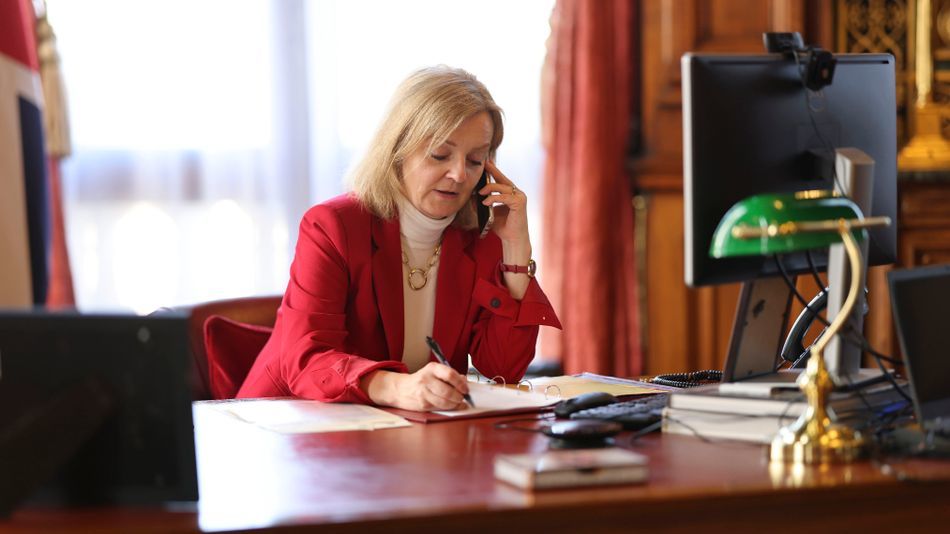 LIZ Truss’s personal phone was hacked by agents suspected of working for Russian President Vladimir Putin. They gained access to top-secret details of negotiations with key international allies – as well as private messages she exchanged with her close friend Kwasi Kwarteng.
The hack was discovered during the summer Tory leadership campaign, when Ms Truss was Foreign Secretary, but the details were suppressed by the then Prime Minister Boris Johnson and the Cabinet Secretary Simon Case.

One source said the phone was so heavily compromised that it has now been placed in a locked safe inside a secure government location.

It is understood that the messages that fell into foreign hands included criticisms of Mr Johnson made by Ms Truss and Mr Kwarteng, leading to a potential risk of blackmail. Sources said that up to a year's worth of messages were downloaded.

They are also believed to have included highly sensitive discussions with senior international foreign ministers about the war in Ukraine, including detailed discussions about arms shipments.

The astonishing incident, disclosed by security sources, solves the mystery of why Ms Truss was forced to change the mobile number she had used for more than a decade shortly before becoming Prime Minister – causing confusion and anxiety among Cabinet Ministers and advisers who were suddenly unable to contact her.

In a statement released to the MoS on Saturday afternoon, a UK Government spokesperson said: ‘We do not comment on individuals’ security arrangements. The Government has robust systems in place to protect against cyber threats. That includes regular security briefings for Ministers, and advice on protecting their personal data and mitigating cyber threats.’

But a source with knowledge of the incident said: ‘This caused absolute pandemonium. Boris was told immediately, and it was agreed with the Cabinet Secretary that there should be a total news blackout. It is not a great look for the intelligence services if the Foreign Secretary’s phone can be so easily plundered for embarrassing personal messages by agents presumed to be working for Putin’s Russia.’

Allies of Ms Truss said that she was worried that if news of the hack leaked it could derail her chance of claiming the Premiership, and ‘had trouble sleeping’ until Mr Case imposed a news blackout.

The security services have grown increasingly concerned about the threat posed by hackers working for hostile countries such as Russia and China, with mobile phones regarded as the ‘soft underbelly’ of the modern state.

The spy software can be launched on phones with a text message, which does not even have to be opened, just received. It then runs in the background without the owner’s knowledge, gaining access to everything on the device and tracking the individual’s movements. The US used similar technology to spy on former German chancellor Angela Merkel’s phone over a number of years.

A security source said: ‘It takes a while to track who is behind attacks like these, whether they are individual cyber-criminals or state actors, but Russia tends to be at the top of the list.’

Ms Truss took an uncompromising approach to Putin during her time as Foreign Secretary and Prime Minister, telling the UN general assembly in September that Putin’s threats to use nuclear weapons as part of his war in Ukraine were ‘sabre-rattling’. The UK has been one of the strongest supporters of Ukraine in the international community.

During the final days of her premiership, Ms Truss became fixated by the weather forecast – because of increasingly alarming security warnings about the situation in Ukraine.

Ms Truss had become alarmed by reports from the intelligence services that Russia could be preparing to detonate a nuclear device in Ukraine or over the Black Sea as part of a show of strength, and was concerned about the impact of a radioactive cloud heading for the UK.

‘Liz was obsessed with the prevailing wind,’ said a source.

Officials said that Putin could ‘go nuclear’ after Ukrainian forces blew up the road bridge connecting Russia and Crimea across the Kerch Strait; Putin had warned that any such attack would ‘cross a red line’ and prompt ‘judgment day’.

Ukrainian President Volodymyr Zelensky was told by his country’s intelligence agencies that there was a ‘very high’ risk that Russia might use so-called tactical nuclear weapons, which are designed to be used on the battlefield – but the effects would spread around the globe in the manner of the Chernobyl nuclear disaster in the same country in 1986.

Last week President Putin said that Ms Truss must have been ‘a bit out of it’ when she made her remarks, and claimed that he had ‘never said anything proactively about possible use of nuclear weapons by Russia’.

Ms Truss’s mobile phone number – the one that can now be revealed to have been hacked – was for sale on the internet, along with those of 25 Cabinet Ministers. They could be accessed on a shady US website charging just £6.49 for access to the information, which cyber experts warned could be used by foreign countries to spy on senior Government figures.

Numbers for former Chancellor Kwarteng, Defence Secretary Ben Wallace, Foreign Secretary James Cleverly and Home Secretary Suella Braverman were among those listed on the site, along with that of Labour leader Sir Keir Starmer.

Former Senior Military Intelligence Officer Philip Ingram said: ‘The phone will be in secure government location which means a secure cage where the device can be forensically examined by experts but without the hackers knowing. They will be looking to analyse what information has been lost, what is at risk and trying to work out how the phone was hacked and possibly work out by whom. It does not surprise me that Liz Truss has had her phone hacked given that the number is available to download online. Other ministers whose phone numbers have been leaked online should be taking action.

‘Ministers and all Parliamentarians need to wake up to the fact that their personal communication devices are vulnerable to being hacked. The information they possess is gold dust to hostile intelligence services. All politicians and in fact all people in society dealing with sensitive information must assume that their communications are compromised and work back from that. You are never going to stop it so you must take it seriously.’
#Boris Johnson  #Angela Merkel  #Johnson  #Pegasus