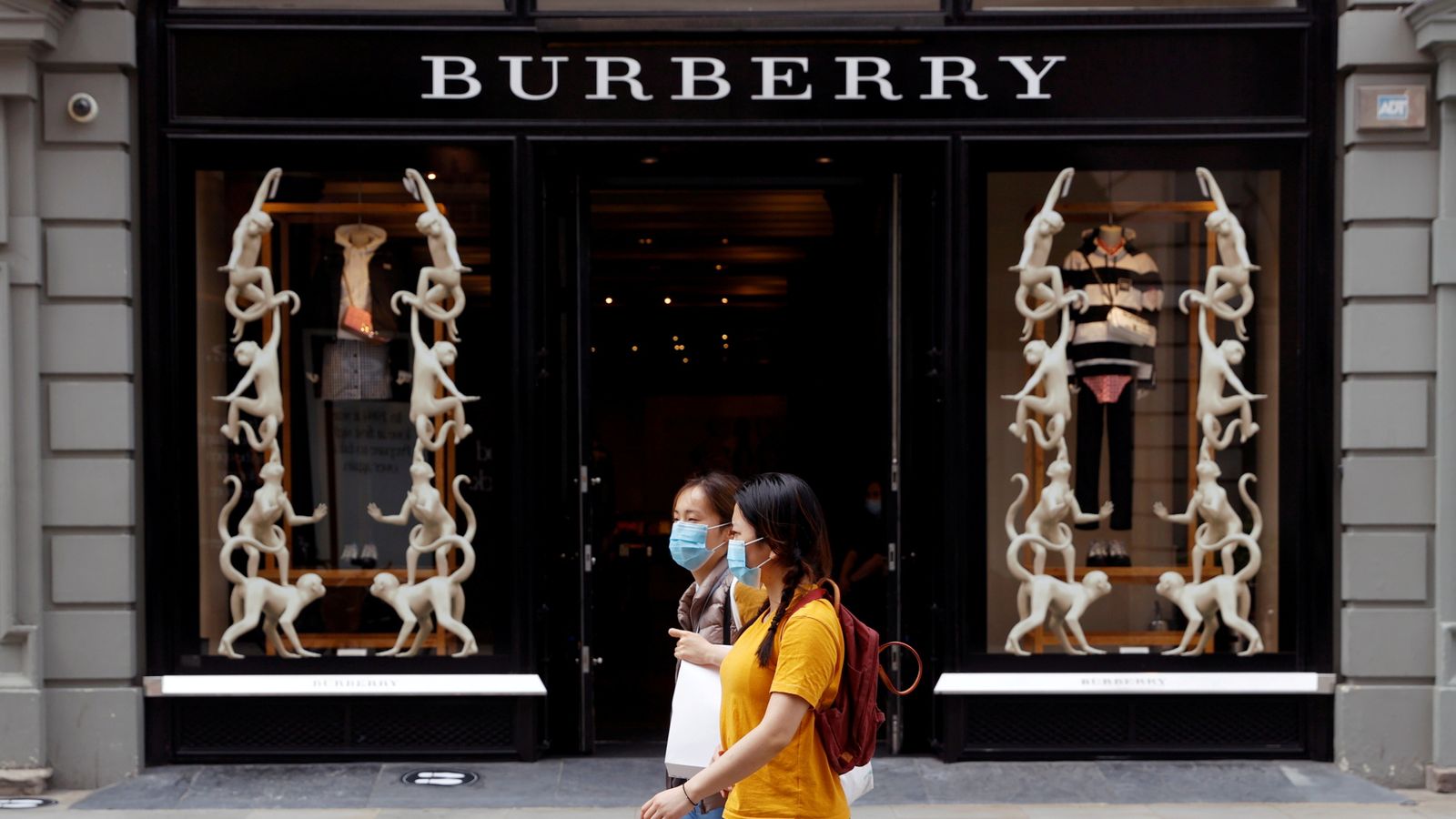 Inflation is on everybody's mind - whether that is in the UK, elsewhere in Europe or the United States.

There are, however, parts of the economy whose customers appear to be relatively immune to price increases.

A couple of them, Watches of Switzerland and Burberry, updated the stock market today.

Watches of Switzerland, the biggest retailer of Rolex watches in the UK and the best performing stock in the FTSE-Mid 250 last year, reported that in March, April and May its sales were up 48% on the same period last year.

That may reflect, in part, the reopening of the economy as people return to physical shops and return to air travel. It may also reflect, to an extent, new store openings.

The company opened three new 'mono-brand' boutiques specialising in just one brand during the period - the Breitling Bullring, TAG Solihull and OMEGA Meadowhall. It also opened a new flagship Watches of Switzerland outlet in Cincinnati, Ohio.

But the robust sales growth was also consistent with what the company has been saying for a while now - that there is still plenty of pent-up demand for luxury timepieces.

And not just Rolex, which accounts for around half of its business, but other names such as Cartier, Breitling, Seiko, Tudor and Audemars Piquet. 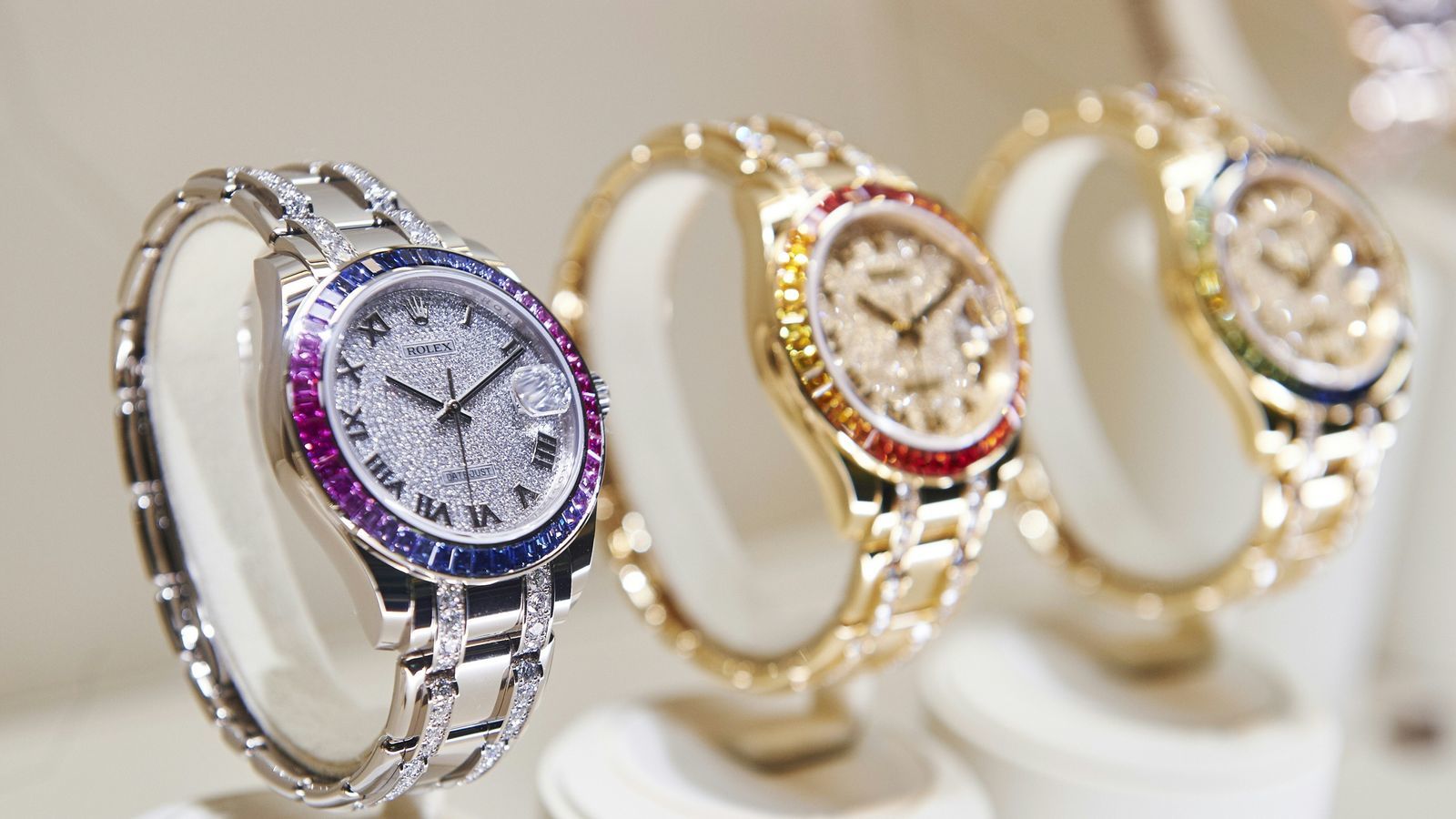 A Pearlmaster 39 wristwatch of Swiss watchmaker Rolex is displayed at the watch industry's biggest annual trade fair 'BaselWorld' in Basel.

Supplies of many of these names has failed to keep up with demand over the last couple of years and Watches of Switzerland has had to introduce waiting lists for some products - and customers are only too happy to wait.

The phenomenon does not only apply to Watches of Switzerland - as well-run a business as it undoubtedly is.

Investors like luxury goods companies at a time of high inflation because of the pricing power that these businesses enjoy.

The likes of Prada and Richemont, the Swiss company behind brands such as Cartier, Van Cleef & Arpels, Chloe and Montblanc, have constantly surprised the markets with the strength of their sales since inflation began making headlines last year in a way it has not since the late 1970s and early 1980s.

So too has LVMH, the world's biggest listed luxury goods company and owner of brands such as Louis Vuitton, Tiffany and Dior, which recently reported a 29% rise in sales for the first three months of the year despite raising prices, while its leather goods and fashion unit saw sales growth even in excess of that. 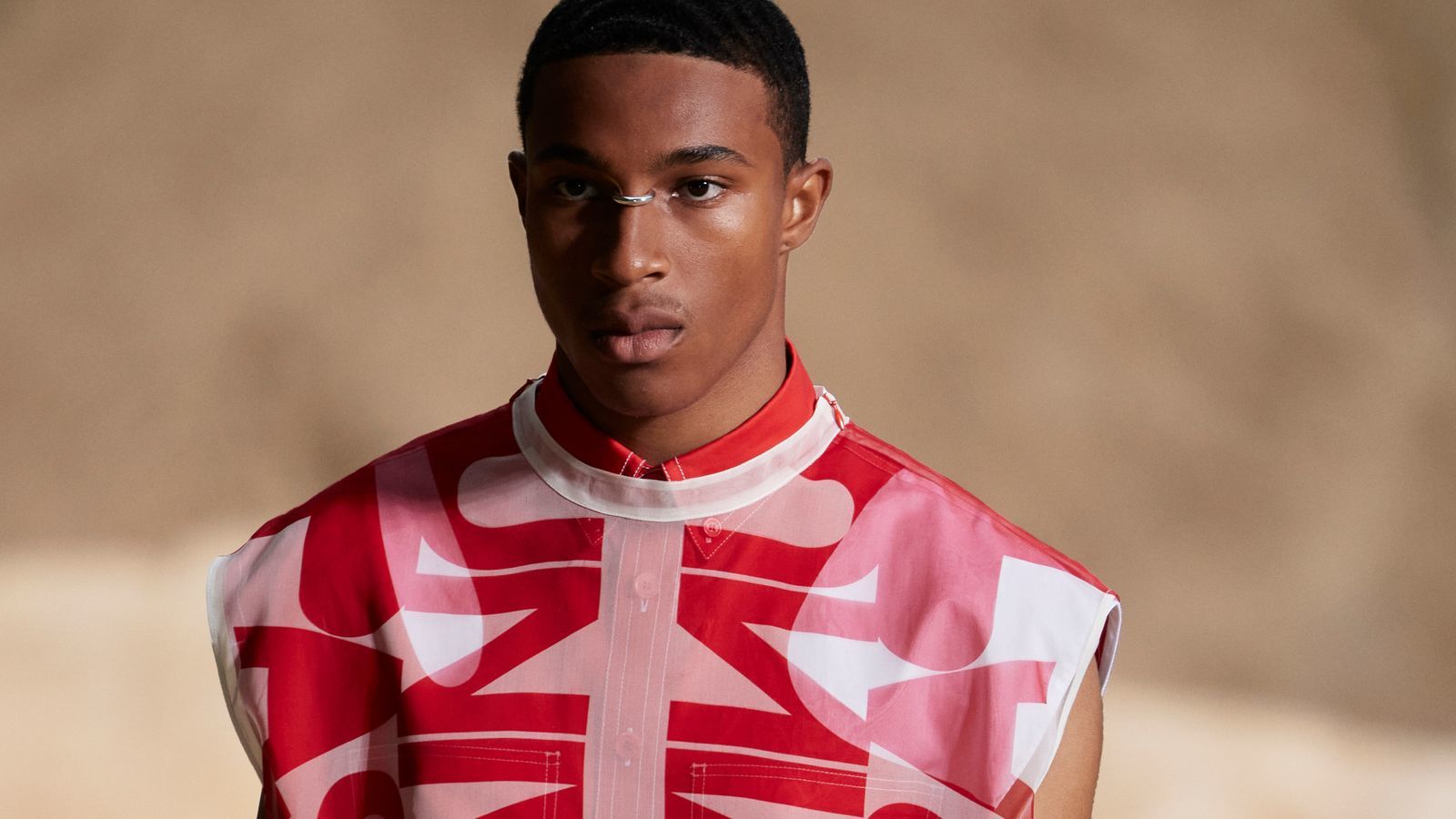 Another intriguing prospect is that Burberry starts to trade more on its British heritage.

It was a pretty robust extraordinary performance in the face of the war in Ukraine, which has deprived it of Russian customers, as well as the recent lockdowns in China.

That latter factor, in particular, has probably cast the biggest cloud over the luxury sector.

It was certainly flagged by Burberry as it unveiled its full year results today. The UK's biggest luxury fashion group reported a 4% rise in full year pre-tax profits, to £511m, with headline sales up 23% to £2.82bn.

Yet the company made clear that its performance this year, during which it expects to grow sales by high single digits (in other words between 7-9%), would depend, to a degree, on circumstances outside its control.

It added: "Our outlook is dependent on the impact of COVID-19 and rate of recovery in consumer spending in mainland China."

"While the current macro-economic environment creates some near-term uncertainty, we are actively managing the headwind from inflation."

The situation in China, Burberry's biggest market, continues to weigh on trading.

The company revealed today that currently around two-fifths of its retail network, including online channels, is inactive in China due to the lockdowns, while trading in Hong Kong remains subdued, primarily due to a shortage of Chinese tourists.

The broader point is that Burberry customers can expect to pay more this year. 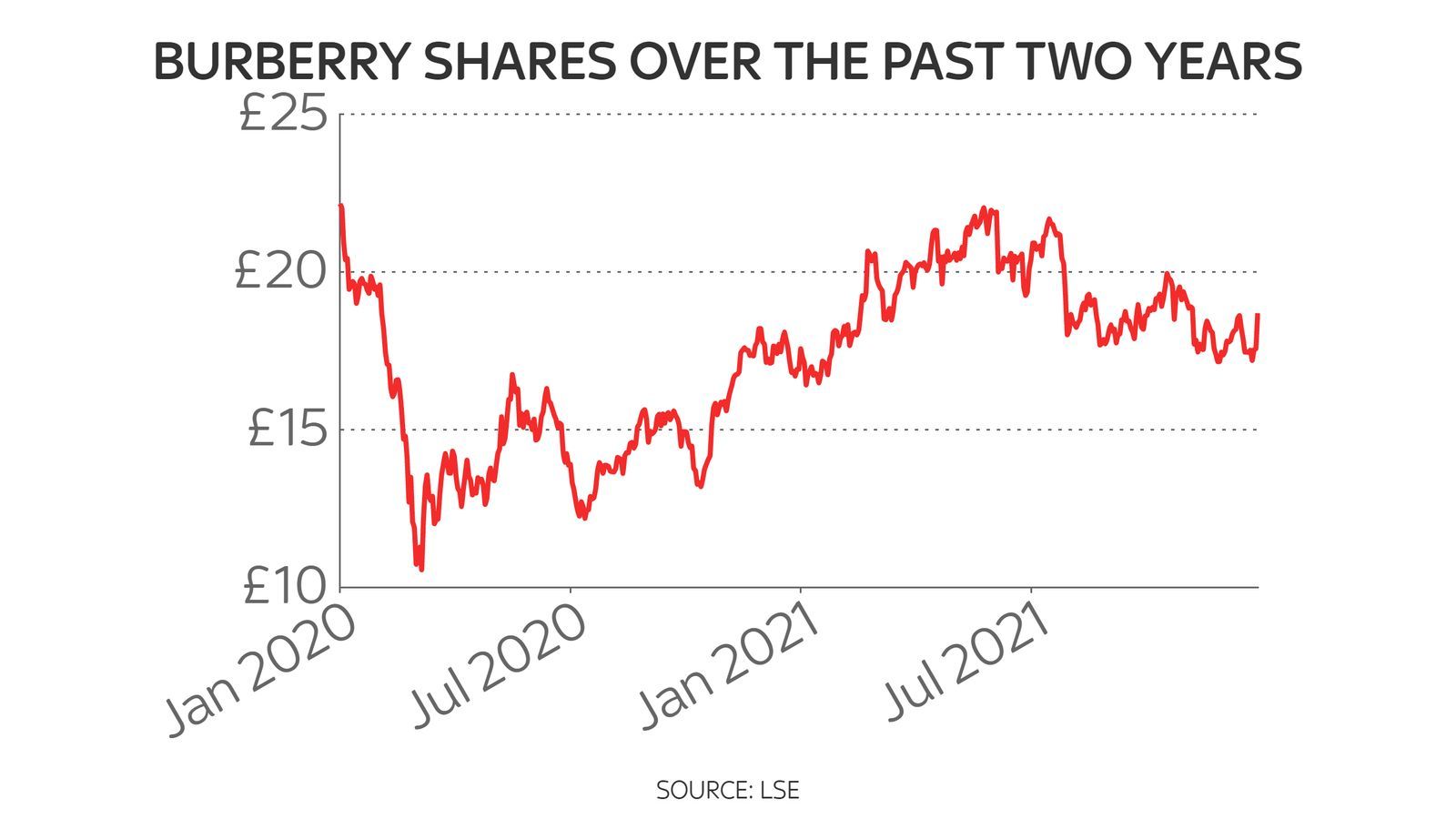 Burberry's share price has slowly recovered since it crashed in 2020.

That will not unduly bother Jonathan Akeroyd, the new chief executive, who took the helm on 15 March.

He has already made clear that he will continue with the strategy of his highly-regarded predecessor, Marco Gobbetti, of continuing to push the Burberry brand upmarket.

The company has in the recent past been trying hard to avoid discounting and sell more of its merchandise at full price and this now appears to be happening: full price sales of outerwear and leather goods during the year were up 39% and 28% respectively on two years ago (the comparison is important because it strips out the impact of the pandemic) while full price comparable sales in the Americas were almost double the level of two years ago.

Moreover, the company appears confident that consumers are not proving too resistant to price increases.

Julie Brown, the chief financial officer, told analysts: "We took a high single-digit price increase on a large part of the leather range back in May last year…and we've taken some price increases in other parts of the range." 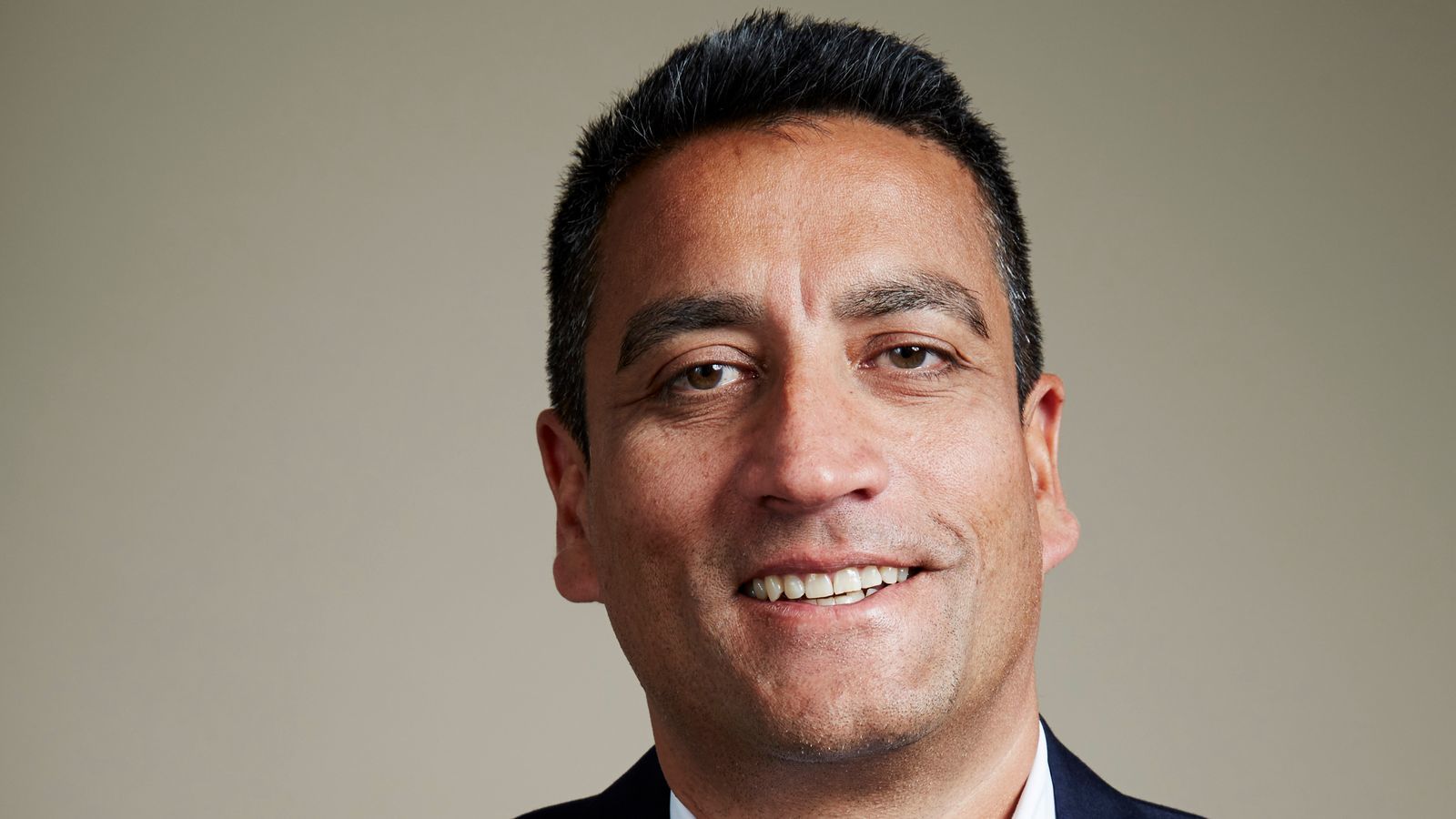 Higher prices will not unduly bother Jonathan Akeroyd, the new chief executive, who took the helm on 15 March.

"We've taken an additional one in January, also, again largely the leather range."

She said Burberry had been particularly successful in raising the price of some leather bags from £600 to the £1,000-£2,000 range.

Ms Brown added: "We've been very successful in moving them - some of the top leather bags are now retailing just below £2,000."

So early into his tenure, it was probably too much to expect a major strategic vision from Mr Akeroyd today, although the new man did hint that he would be unveiling "a more concise merchandising strategy" later this year that is likely to involve greater use of 'pop up' outlets.

Another intriguing prospect is that Burberry starts to trade more on its British heritage.

Mr Akeroyd, who was previously chief executive at Gianni Versace, said: "We are very fortunate to be in such a strong position as a great British brand. And this brings a lot of opportunity."

"The Chinese consumer, they're fashion-forward. They generally - the luxury consumer - are a little bit younger."

"And that's [going to be] a real benefit to the brand as we really start to work on being the fact that we are a British luxury heritage brand, but also with a contemporary twist."

It was a confident performance that suggests, after the disastrous Christopher Bailey and the successful but media-shy Mr Gobbetti, Burberry's new CEO knows exactly where he wants the brand to be - more upmarket and more British.

Regardless of the inflationary outlook.