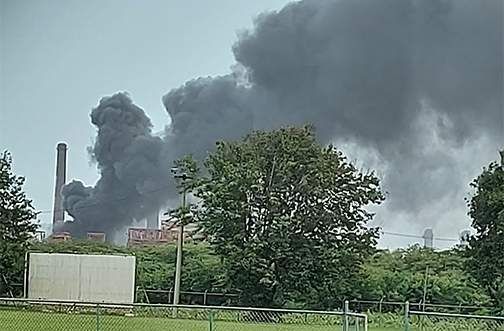 Operations at bauxite outfit Jamalco in Hayes, Clarendon, will today “be at a standstill” following a “major fire” that took a cross-parish effort, which lasted well over six hours, of seven units from the Jamaica Fire Brigade and 61 fire personnel to contain the blaze.
According to public relations officer for the brigade, Emeleo Ebanks, the fire reportedly began sometime after 3:00 pm. He was, however, unable to confirm or dismiss reports that a flange reportedly blew on an oil line, resulting in the fire.

In addressing reports that staff had been injured in the blaze, Ebanks told the Jamaica Observer close to press time last night that no such information had been received.

“I can’t confirm anything about how it started because the fire is still going on. We presently have seven fire units and approximately 61 firefighters on scene. The fire is now contained and we are continuing the firefight,” Ebanks told the Observer.

Responding to sentiments that the Jamaica Fire Brigade team might not have been equipped to deal with a fire of that nature because it is reliant on using water, he said, “When we get to different aspects of the fire then we will treat with whatever extinguishing medium is required. As it is right now, we are using water.”

As for an initial assessment of the damage, Ebanks said that would not be forthcoming in the short term.

“It definitely is a major fire. An initial assessment of the damage will not be for tonight, I can assure you,” he told the Observer.

Donna Marie Brooks, corporate services manager for Jamalco, speaking with the Observer earlier yesterday evening, said the fire had up to that point been contained to the plants' powerhouse.

“The powerhouse is that area of the plant that supplies all the power to the facility. Everything is going to be shut down for now until it’s back up,” she said, noting that the plant will be at a standstill for “a little while” because of the blaze.

“We are going to be down for a little… I suspect. It’s a major fire so it will impact business,” Brooks pointed out.

She said the fire occurred during what was a normal workday for individuals manning the company’s production area.

“We are a 24-hour operation so the production staff would be there, but not the administrative staff.

The production staff is 24-hour over different shifts, so people would have been at work in the powerhouse, but everybody made it out safely, so we have no injuries, no casualties,” she told the Observer.