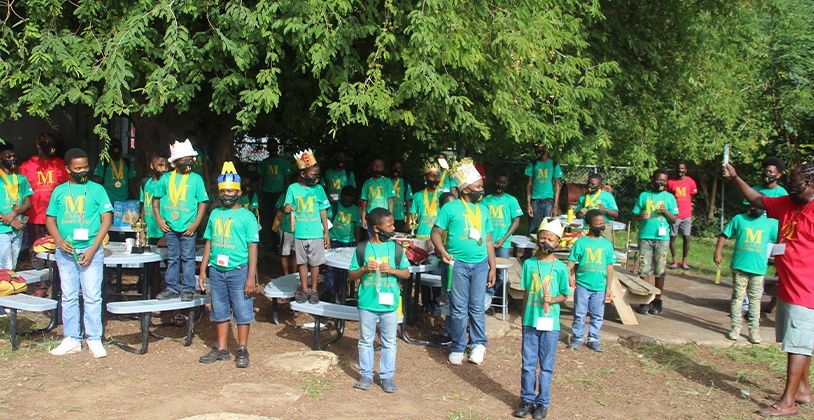 The annual MALE summer camp ended on a spirited note late Friday, August 20, with a newly crowned Camp Prince and several other campers copping awards for good behaviour and displaying top skills in a number of areas.

President of Mentoring Anointing Male Leaders Everywhere (MALE) Mr. Henderson Title told BVI Platinum News that the camp was downsized from 80 to 40 campers this year due to the COVID-19 restrictions.

However, having the one week camp, which was held at the Virgin Islands School of Technical Studies (VISTS) in Baughers Bay, was critical for the mental wellbeing of the 40 campers who were chosen for this year's camp.

"It [the camp] was necessary because we were having online sessions since we couldn't meet. So it was a time for the boys to come out, get on the basketball court, be able to visit the mangroves, the Green VI site, so it was an outing for them. It was a breath of fresh air to come out and take part in outdoor activities, that's why it was so important," he stated.

He explained that the young men were chosen based on the first 40 parents who indicated their interest in their sons taking part after it was announced in a group chat.

"We had to turn away a lot of boys," he said regrettably.

The theme for this year's camp was "above and under the water "and activities included water sports such as snorkelling and diving, kayaking. They also visited mangrove sites and assisted in planting some seedlings.

A few members of the Royal Virgin Islands Police Force also visited the camp to speak to the boys about being trustworthy citizens.
In addition, students were taught some basic culinary and auto-mechanic skills, facilitated by some staff members of the VISTS.
The week culminated with the award ceremony.

"The young men were given the challenge to create a crown. The winning Crown, the MALE organization will buy that Crown from the camper for $40 and then that Crown will be used to Crown our Camp Prince," Mr. Title explained.

The best Crown was made by Cameron Todman, which was used to crown the Camp Prince – Reyante Edwards.

The camper who emerged with the Best Mechanical Skills was Robert Smith, the Best Scientific Innovation Skills award went to Jamarcus Prince, the Best Computer Technological Skills camper was Nathan Charles, and the Highest Level of Integrity camper was Malachi Thomas.

MALE is funded by private individuals and companies such as UNITE BVI, Grace Messenger Service, Carey Olsen, Hon. Neville Smith, among others.