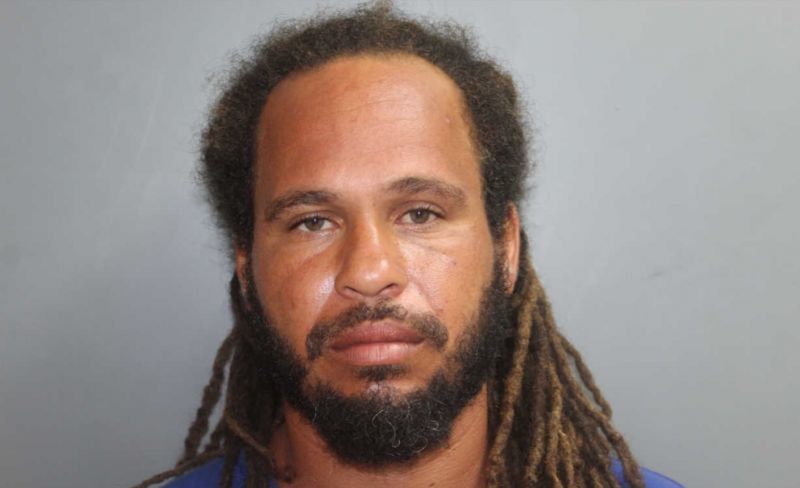 Man arrested for breaking into woman's home & assaulting her

A St. Croix man was arrested and charged with first-degree burglary, aggravated assault, second-degree assault and simple assault and battery after allegedly entering a woman's home without permission and assaulting her.
The suspect, Esteban Diaz, appeared in court via teleconference from the Golden Grove Correctional Facility on Wednesday for his advisement hearing, which was presided over by Judge Earnest Morris.

According to the probable cause fact sheet, Diaz entered the woman's home twice on Tuesday, the first time at 1:00 a.m. and later at 5:40 a.m. During the first invasion, the victim stated that she was sleeping when she was awoken by yelling noises in a part of her house. Diaz then came to the victim's room and started yelling at her, grabbed her by the neck and started choking her to the point where the victim's breathing was impeded. He then punched her four times in the face, according to the probable cause fact sheet.

Officers responded to the scene, followed by Detective Samir Maldonado at around 2:50 a.m., who investigated the matter. At that point, Diaz had already left.

Detective Maldonado said he observed "bruising on the victim’s left eye and several scratches and redness on her neck." The victim was advised to reach out to the detective for assistance and to also utilize resources available to domestic violence victims.

Then around 5:40 a.m. Tuesday, the 911 Emergency Call Center reported a disturbance at the victim's home. When Det. Maldonado arrived on the scene, he saw the victim outside her home crying, yelling that Diaz was in her home at that very moment, according to the probable cause fact sheet. Det. Maldonado then walked toward the back of the victim's residence, where he saw Diaz slowly opening a kitchen backdoor. Det. Maldonado said he immediately pulled out a taser and ordered Diaz to stop and get on the ground. Diaz was then arrested without incident, and was jailed at the Golden Grove Correctional Facility without bail.

Diaz was previously ordered not to make contact with the victim following a previous incident.

As part of a deal to release the suspect pending trial, V.I. Attorney Jasmine Griffin requested that the suspect's bail of $10,000 be fully secured, contending that the charge of burglary alone carries a $75,000 bail requirement. "The people ask that the $10,000 bail be fully secured. Mr. Diaz has demonstrated that he is so far unwilling to abide by the terms of his release and court orders, given that this is his second alleged assault, or should I say negative interaction with the same victim," she said.

Kathryn Slade, an attorney with the V.I. Public Defender's Office, contended that Diaz at the time was imprisoned and could not post bail. "Actually his boss is going to be posting on his behalf," she said, adding that the suspect did not have cash or property. "And so to require him to fully secure [bail] would mean that he would be detained on these charges," she said.

Ms. Slade said the suspect would reside with his mother, but Judge Morris was skeptical. "What assurance does the court have that if his father could not get him to abide by the terms of release that his mother will be able to do so?" he asked. Ms. Slade said the mother has assured that "she understands the importance of him staying away from the alleged victim in this matter, and that she is willing to call the police or the Superior Court marshals if he does not follow the court order."

Judge Morris contended that Diaz's father must have offered the court those same assurances or else he would not have been released.

Ms. Griffin requested from the court that Diaz be placed under house arrest if he was able to make bail.

Judge Morris required that Diaz post secured bond of $1,001 and unsecured bond for the remainder of the $10,000 bail. The judge further ordered that Diaz be released into the custody of his mother; not to leave St. Croix without the court's written permission; must report to the Office of Probation every Tuesday; shall remain employed, though he will be placed under 24-hour house arrested without the use or electronic monitor; and will be permitted to leave the residence only to appear in court, to report to the Office of Probation, to meet with his attorney, to go to the hospital for emergency medical treatment, or to go to work.

"That's directly to and from work or any work site," Judge Morris stressed.

Diaz was further ordered to surrender his passport if he had one, and was not allowed to obtain a passport if he didn't own one. Diaz is to maintain a minimum distance of at least 1,000 feet from the alleged victim, and is to have no contact direct or indirect with any victims in this case.