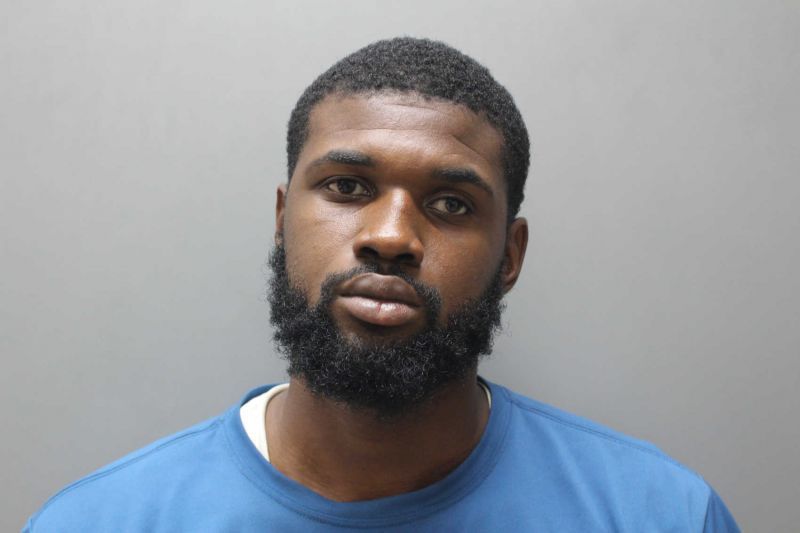 Man in USVI kicks ex-girlfriend in ribs; drags her by the hair

Police have arrested and charged a man accused of assaulting his ex-girlfriend and the good Samaritans who came to her aid.

Bryan Christopher Jr., age 23, was arrested and charged on September 7, 2022, with third-degree assault, destruction of property, disturbance of the peace, and using a dangerous weapon during a violent crime in a matter involving his ex-girlfriend and her friends — the good Samaritans.

Christopher was also hit with a second set of charges — filed by his ex-girlfriend — including second-degree assault, third-degree assault, domestic violence, and using a dangerous weapon during a violent crime.

The report filed by the ex-girlfriend on September 6 states that Christopher had assaulted her. According to that probable cause fact sheet, the ex-girlfriend woke up that morning with the intention to file documents for her firearm license for a job. On her way to the police station, Christopher called her and asked where she was, to which she replied that she was turning in her documents. He then told her to bring back the jeep. She realized that the documents were taking up more time and proceeded to head home. When she returned home, she stated that Christopher slapped her multiple times with both his hands to her face, saying, "I ain't tell you to bring back my jeep? "You keep picking up my thing them." He then pulled her by her hair, causing her to fall to the floor where he started stomping on her and kicking her in the ribs. He then pulled her off the floor, stating that she needed to pack her things and leave, according to the probable cause fact sheet.

The court documents further state that Christopher then pushed the victim, causing her to fall on the couch and then pulled her by her hair to get up and pack her things. An argument then ensued, and Christopher pulled her purse from across her body, bursting the strap. He then looked through her purse. At that moment, the victim took her pepper spray and hid it in her jacket in fear of getting hit again. She quickly put on her shoes and hurried out of the house. Christopher then followed the victim outside, chasing and yanking her back into the yard. The ex-girlfriend then took the pepper spray from her jacket, sprayed him and ran through some bushes. It was there that she called her friend and her friend's boyfriend to come pick her up.

According to documents before the court, the complainants were summoned by the ex-girlfriend to come and get her, stating that she was afraid. When they arrived, she was standing outside the residence. They noticed that she had injuries to her face and chest and asked her what she wanted to do. The woman told her friends that said that she only wanted to get her belongings from the house but that Christopher had locked the door. They waited in their truck while the ex-girlfriend was outside. Moments later, Christopher came rushing and screaming at his ex-girlfriend who was quickly walking away from him and eventually got into her friends' truck. Before getting into the truck, however, she pepper sprayed the suspect. Christopher then grabbed a rock off the ground and came to the side where the ex-girlfriend was sitting and tried to open the door. When he was unsuccessful, he smashed the front passenger door with the rock, according to the probable cause fact sheet.

The friend’s boyfriend said that Christopher had a knife when he came out of the house, and that when he got pepper sprayed by the victim, he charged at the victim's female friend, stating that he was going to kill them and they needed to leave. According to court documents, after the suspect threw the rock which hit the victim, the female’s boyfriend got out of the vehicle, at which point Christopher pulled the knife at him, prompting the friend's boyfriend to reach for his licensed firearm. Christopher then backed away and the Good Samaritans left with the victim.

Christopher appeared in court on Friday on both sets of charges. In the matter involving the victim and her friends, the judge ruled that Christopher must pay 10 percent of a $20,000 bail amount. He was ordered to have no contact with the victims or witnesses, and is not allowed to leave the St Thomas-St. John district without authorisation from the court. Christopher must also surrender his passport and has to report to the office of probation once a week. The suspect is not permitted to consume alcohol or any controlled substance — nor is he permitted to possess a firearm or ammunition.

In the second matter filed through the Domestic Violence Office, bail was set with an unsecured bond of $15,000. Christopher has also been ordered to stay 50 ft away from the victim.