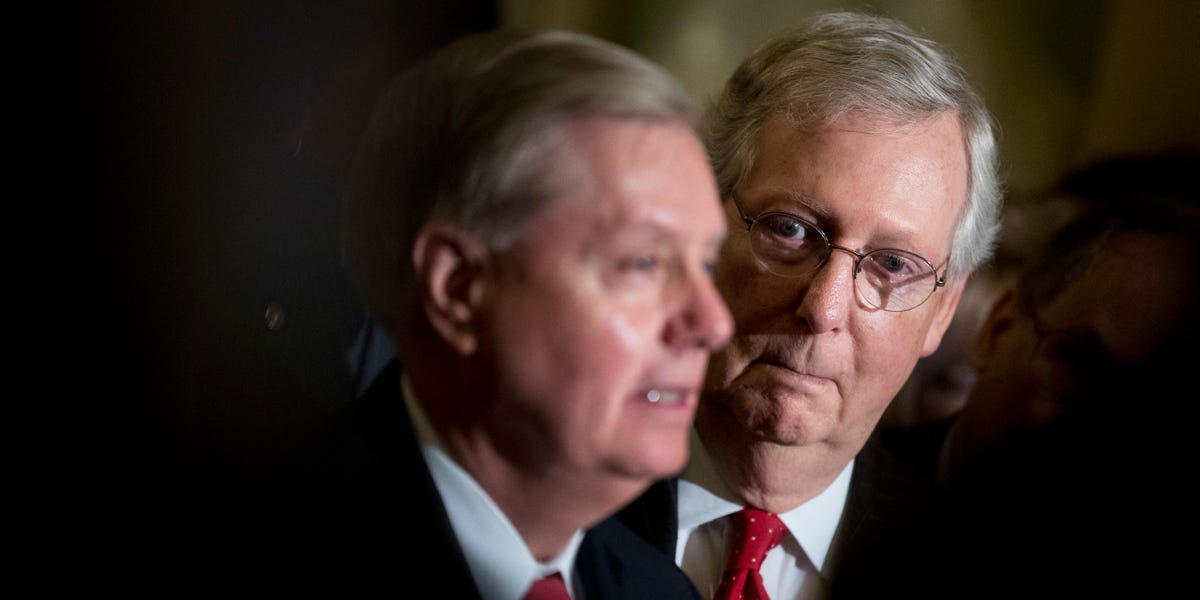 The vote makes McConnell the longest-serving Senate leader in history as Democrats keep control of the upper chamber.
Republicans in the Senate voted Wednesday to have Sen. Mitch McConnell of Kentucky remain as their GOP leader.

McConnell fought off a challenge by GOP Sen. Rick Scott of Florida, who chairs the National Republican Senatorial Committee and formally announced during the Republican lunch on Capitol Hill on Tuesday that he'd be running to replace McConnell. This was the first time McConnell had faced a challenger during his time as GOP leader.

"I welcome the contest," McConnell told reporters after Scott announced his bid.

Scott received 10 votes — including from just reelected Sen. Ron Johnson of Wisconsin — and McConnell received 37, while one senator voted present.

The vote was held behind closed doors, but several senators made their vote public, including GOP Sen. Lindsey Graham of South Carolina, a close ally of former President Donald Trump.

"I voted for change," he told reporters. "I accept the results of the conference, and I hope we can be better."

"Congratulations to Senator McConnell on his reelection as Senate Minority Leader," Graham tweeted. "I supported and voted for a delay in the leadership election. I believe the process was rushed and a delayed vote would have done the conference enormous good in finding unanimity. At the end of the day, I voted for change."

Several Republicans, including Sen. Ted Cruz of Texas and Marco Rubio of Florida, wanted to delay the leadership vote until after the Georgia runoff, set for December 6.

On Tuesday, Scott backer Sen. Mike Braun of Indiana told congressional reporters that he was tired of being cut out of "significant policy" talks. "I want to feel like I'm part of the process," Braun said while Scott was still pitching his leadership challenge to the GOP caucus.

After the Senate leadership vote, Scott released a statement saying that he had long "been frustrated by the broken status quo in Washington that continuously fails to deliver on its promises to the American people."

"Although the results of today's elections weren't what we hoped for, this is far from the end of our fight to Make Washington Work," he said.

During the closed-door hearing, Republican colleagues of Scott and McConnell said the two men engaged in a tense back and forth with one another.

"Sen. Scott disagrees with the approach that Mitch has taken in this election and for the last couple of years, and he made that clear and Sen. McConnell criticized Sen. Scott's management of the NRSC," Sen. Josh Hawley of Missouri told reporters, according to CNN.

Scott and McConnell butted heads in the lead-up to the 2022 midterms, with Scott pushing for Republicans to release an agenda that would show voters how Republicans planned to deliver for them if they won. On his own, Scott released a 12-point plan that President Joe Biden repeatedly bashed during speeches.

Many Republicans distanced themselves from the plan, and McConnell has blamed "candidate quality" as a factor in why the party lost the majority on Election Day. Scott called the GOP results a "complete disappointment."

"I don't dislike anybody. I mean, I have my beliefs about, you know, what I'd like to accomplish up here, but I don't dislike people," the senator responded with a chuckle.

Republicans have the opportunity to gain some leverage if they win the Georgia runoff. Such an outcome would result in a 50-50 Senate, with Vice President Kamala Harris able to break the tie in favor of Democrats during voting.

McConnell told reporters on Wednesday that he and Senate Minority Whip John Thune addressed complaints during a Wednesday morning huddle from rank-and-file members who felt left out of day-to-day deliberations.

"Any five of us can call a caucus to discuss any particular issue. So we acquainted our members with the tools they have," McConnell told reporters at the US Capitol, adding, "I think that'll be used more often. I certainly welcome it."

When pressed by reporters about whether he would be fine-tuning his management style to show the 10 defectors that he'd gotten their message loud and clear, McConnell pushed back.