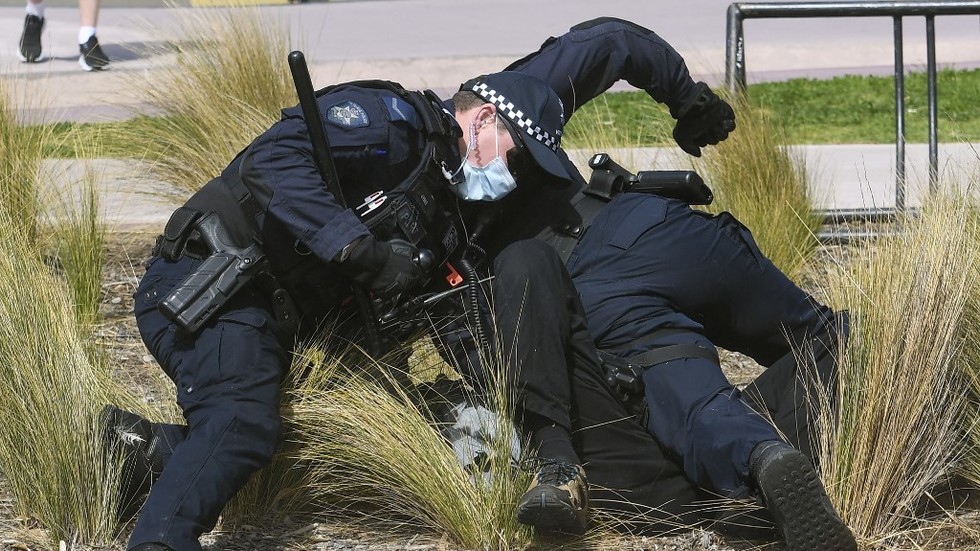 More than 100 protesters arrested as police in Melbourne, Australia crack down on vaccine mandate demonstrators

Police in Melbourne arrested more than 100 demonstrators at a rally against mandatory vaccination. The protest came after Victoria Premier Daniel Andrews issued a fresh round of vaccine mandates, affecting over a million workers.

Andrews announced on Friday that all Victoria residents working outside their homes need to have a first Covid-19 vaccine dose by October 15 and be fully vaccinated by November 26. The mandate will affect around 1.2 million Victorians, the Guardian reported, working in a range of occupations including retail, law, media and professional sports. It comes on top of existing mandates for healthcare, education and construction workers.

These mandates, and the draconian lockdown implemented by Victoria authorities, have led to mass demonstrations marked by extreme police brutality. Locals in Melbourne took to the streets again on Saturday to protest against the mandates, but the several dozen demonstrators were outnumbered by cops, who soon chased them away on horseback, while officers on foot tackled and arrested some among the crowd.

One day earlier, a group of teachers in Melbourne staged their own silent protest against vaccine mandates. The group were largely masked and vaccinated, according to reports, but at least one person was arrested.

Both protests were notably less violent than recent clashes on the streets of Melbourne, which drew international attention due to the extreme tactics used by police.

Andrews plans to reopen the state of Victoria by late October, lifting what is already the world’s longest-running lockdown. Around half of Victoria’s eligible population are fully vaccinated against Covid-19, but no matter how high that percentage rises between now and reopening, Andrews stated earlier this week that unvaccinated people will not be given the same freedom as those who are inoculated when the state reopens.

“We haven’t even had a conversation about when [the vaccinated economy] might change and everyone might be on an equal footing,” he said at a press conference on Monday, several weeks after warning that those without the jab would be “locked out” of the “vaccinated economy.”

Despite the ongoing vaccine rollout, cases of Covid-19 are currently higher in Victoria than at any point throughout the pandemic thus far. The state recorded an all-time high of 1,488 cases on Friday, along with two deaths.