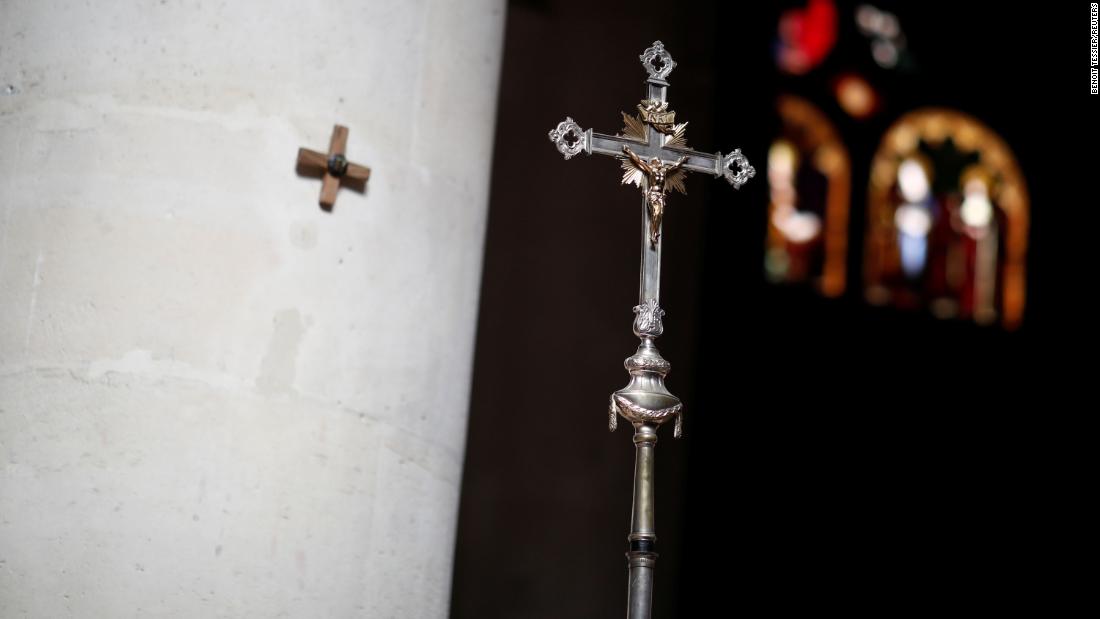 Members of the Catholic clergy in France sexually abused an estimated 216,000 minors over the past seven decades, according to a damning report published Tuesday that said the Church had prioritized the protection of the institution over victims who were urged to stay silent.

The number of abused minors rises to an estimated 330,000 when including victims of people who were not clergy but had other links to the Church, such as Catholic schools and youth programs. Between 2,900 and 3,200 abusers were estimated to have worked in the French Catholic Church between 1950 and 2020, out of a total of 115,000 priests and other clerics, the report found.

"The Catholic Church is the place where the prevalence of sexual violence is at its highest, other than in family and friend circles," said the report, which found that children were also more likely to abused within Church settings than in state-run schools or summer camps.

"Faced with this scourge, for a very long time the Catholic Church's immediate reaction was to protect itself as an institution and it has shown complete, even cruel, indifference to those having suffered abuse."

Tuesday's report, the most complete account of sexual abuse in the French Catholic Church to date, was compiled by an independent commission at the request of Church officials. It follows similar reports from other countries that have dealt a blow to the reputation of the Church in recent years.

Jean-Marc Sauvé, the president of the Independent Commission on Sexual Abuse in the Church (CIASE) which authored the report, said the abuse was systemic and not limited to "a few black sheep that strayed from the flock."

Abuse of minors within the Church accounts for close to 4% of all sexual violence in France, Sauvé said at a news conference Tuesday. Most of the violence happened between 1950 and 1968, he said, but it still persists today, adding, "the problem is not behind us, it is still here."

François Devaux, head of the abuse victims' group La Parole Libérée, told Church representatives they were "a disgrace to humanity" at the news conference.

Archbishop Eric de Moulins-Beaufort, the head of France's Conference of Bishops, said Tuesday that the scale of abuse outlined in the report was "more than we ever could have imagined," and asked forgiveness to "those who were victims of such acts." 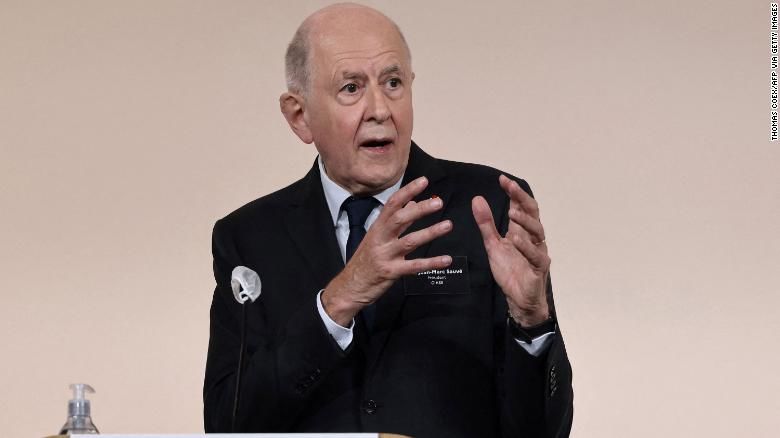 Jean-Marc Sauvé, head of the independent commission behind the report, delivered its findings on Tuesday in Paris.

The investigation was commissioned in 2018 by French Catholic clergy groups and financed by the French Catholic Bishops conference, but members are not paid and acted independently of the Church. The commission was permitted to access the archives of dioceses and religious institutions.

Sauvé, a former civil servant, headed a 21-member interdisciplinary panel of experts from diverse religious backgrounds to produce CIASE's report. It gathered direct testimony from nearly 6,500 people, leading to the identification of 2,700 abuse victims, Sauvé said, adding that a further 4,800 were identified by combing through Church archives and press clippings.

"These people were victims. They became witnesses and in this sense, actors of the truth. It is thanks to them that this report has been conceived and written," the report summary said.

The estimated numbers of abused children were extrapolated from a survey for the commission by the French National Institute of Health and Medical Research, who worked with the polling agency IFOP to survey a representative national sample of more than 28,000 people over the age of 18 online between November 25, 2020 and January 28, 2021.

The report estimated the number of survivors nationwide over time based on the number of survey respondents who said they had been abused. The national survey came in addition to a public call for victim testimonies.

The panel also interviewed 11 abusers from the clergy to shed light on their motivations and how they viewed their actions, Sauvé said.

Sauvé said his commission drew on similar investigations conducted in the United States, Ireland and Australia. He said it was only the second time a survey of sexual abuse in the Catholic Church had been carried out among the general population. "This had only been done in one country, the Netherlands, and only on the Dutch population above 40," he added.

The Catholic Church in France has taken a number of steps to tackle the scourge of sexual abuse in recent years. In 2019, the Diocese of Paris signed a protocol with the city prosecutor to allow suspected abuse to be investigated without survivors making an official complaint to the authorities.

More than half the abuses detailed in the report occurred before 1969, Sauvé told CNN, when he said the Church in France ignored abuse by people it put in power.

"This first period ... is marked by absolutely total indifference of the Church towards victims. The suffering of victims, the harm (suffered by) victims, the trauma of victims, in fact, does not exist," Sauvé said.

The report said that over the 70 years examined by the commission, "the Church's attitude could be summarized as one of concealment, relativization or even denial, with only a very recent recognition dating from 2015, and even then, unequally accepted by dioceses and religious institutions."

While the Church has taken "important steps" to prevent sexual violence in recent years, the report described them as reactive and insufficient. It also warned that although "these acts of violence were in decline up until the early 1990s, they have since stopped decreasing."

The report issued 45 recommendations, including that the Church's canon laws be revised.

"Generally, transgressions of sexual morality in the Catholic Church are associated with the sixth commandment, 'You shall not commit adultery,'" Sauvé said. The report recommends that "the Church pay heed to the fact that sexual violence, and rape in particular of course, are a work of death, which in reality fall under the commandment 'You shall not kill.'"

The report also calls for a message to be sent that "the secret of confession cannot change the obligation ... to signal cases of sexual violence inflicted on a minor or vulnerable person to judicial and administrative authorities.

The report's summary said that "reinforcing the presence of secular figures and women in particularly in decision making spheres" of the Church "seems not only useful but necessary," and suggested "psychological evaluation" for trainee priests.

It also recommends that priests receive training in law, particularly with regards to the rights of children. Future priests should be trained, to have "a critical spirit with regards to questions of authority and obedience," it said.

The Vatican revised its canon laws in June to expand explicitly forbidden sexual offenses and, in Pope Francis's words, "reduce the number of cases in which the imposition of a penalty was left to the discretion of authorities."

The report also recommends that the Church puts in place a mechanism to compensate the victims of sexual abuses committed by its clergy and to put in place an "independent process to officially recognize" survivors if the statute of limitations has expired, or if the offender has died.

"This isn't about handouts or rescuing victims. It is simply about repairing the ... damage that the Church has a responsibility in," Sauvé said. "It is in fact a debt the Church owes victims."

'I will die with the trauma of what happened'

One of the thousands of victims who testified before the commission was Christian Dubreuil, now aged 65.

"Pedophilia is the perfect crime because it is the only one for which the criminal is sure, or almost sure, that the victim will not report them," he told the commission in public testimony.

A senior aide to French government ministers before his retirement, Dubreuil grew up not far from Lyon. He says he was a shy and studious child in a family without much history of formal education.

Dubreuil's abuser slipped into the family circle under the guise of furthering a bright boy's education, he says. Every Thursday, he would pick him up and they would visit historical sites together.

Dubreuil described his abuser's infiltration of his family as "the spinning of a spider web that traps you."

Dubreuil remembers being abused in his family's living room, as his parents worked in their shop below. He said the abuse lasted for nine months, starting when he was 11 and lasting beyond his twelfth birthday.

"I will die with the trauma of what happened, even though it was more than half a century ago," he added.

Dubreuil said he hoped the report would lead the Church to admit to systemic abuse and cover-ups in France.

"They ... thought there was an exception for the French religion, which supposedly meant that, a few specific cases aside, the French Church was not affected. This lie will collapse."