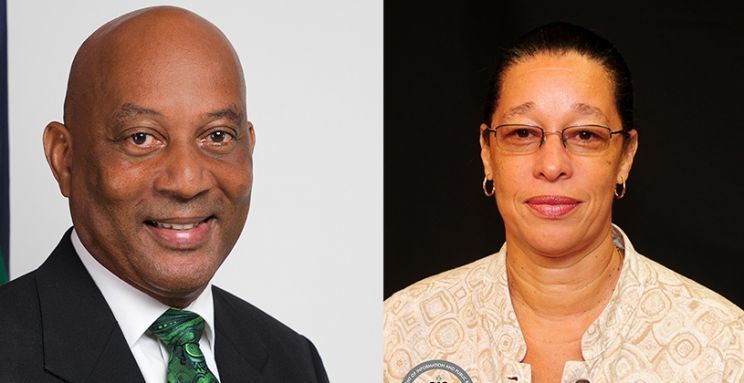 The Commission of Inquiry (CoI) investigating Government corruption has pressed the Government to turn over boxes of files relating to land deals. Those files are said to be affected by mould and stored at the Ralph T. O’Neal Administration Complex.
Prior to her departure from the Ministry for Natural Resources, Labour and Immigration, Permanent Secretary, Dr. Marcia Potter appeared before the CoI alongside the subject Minister, Hon. Vincent Wheatley.

The Commission had requested details of all disposals of Crown Land in the last three years, including the papers upon which the BVI Government made the decision to dispose, including all valuations relied upon, the rationale for the disposal.

Additionally, the Commission asks for details of disposals in the last 10 years where payment wasn't received.

According to published transcripts, the Commission wanted to know if the list of Crown land disposals provided by the Government had all the accompanying documents. These are all of the Crown Land documents in hard copy until 2019 when ExcoTrack came in going back.

“I don't think that those would have been sent because they are in files down in the Complex, but we would have to seek to get an officer willing to go to search through those boxes and pick out all of the files to send them forward, which I would add would be mouldy, which is one of the problems we have with the files,” Dr. Potter explained when she appeared before the Commission on May 7.

Dr. Potter was told that the Commission did not intend to offer criticism of the officer involved in the collection of the information.

“I think if we start--the starting point was that the--you would accept, both of you, wouldn't it, that if we look back at the request, the Commission was seeking those documents, wasn't it? Dr. Potter was asked.

“Well, with respect, Dr. Potter, it isn't an interpretation. It's a reality,” Dr. Potter was told.

Dr. Potter indicated that another interpretation was taken with the files, but if they are requested, an officer can retrieve those files to send them forward.

However, the Commission maintained that the files had already been requested.

“They haven't been provided to the Commission. Now, you may be right that the officer may have taken a decision for practical reasons as to why they couldn't comply with the request. As you've explained, the files are held in boxes in another building. The difficulty for the Commission was that we were not told that. We simply were given what we were given,” Dr. Potter was told.

Both Dr. Potter and Hon. Wheatley were asked whether the Commission team could come along to inspect the hard copies.

“I have no trouble at all. And I must apologise, it wasn't made known to me that anything was missing. I'm hearing for the first time (unclear) was missing,” Minister Wheatley shared.

It was pointed out that the commission wanted Crown Land documents in hard copy until 2019 when ExcoTrack, a software used by the Cabinet, came online.

It was decided that Dr. Potter would report back to the CoI after exploring further the condition of the files, cross-reference documents they might have on the Cabinet software so as to determine what files to pull from storage.

“I can't tell you how much time would be needed to research them, but we certainly will do our best to try to identify all that are necessary for this inquiry, but it's a lot of files and a lot of boxes to go through," Dr. Potter stated.

Dr. Potter further informed the CoI that the ministry is 'full of paper', and they have been trying to get them scanned.

"It's an awful lot of paper. Which we need to get digitised. And because they are land matters, they are extremely important that we get them digitized and to secure these documents," Dr. Potter stated.
#CoI  #Commission of Inquiry