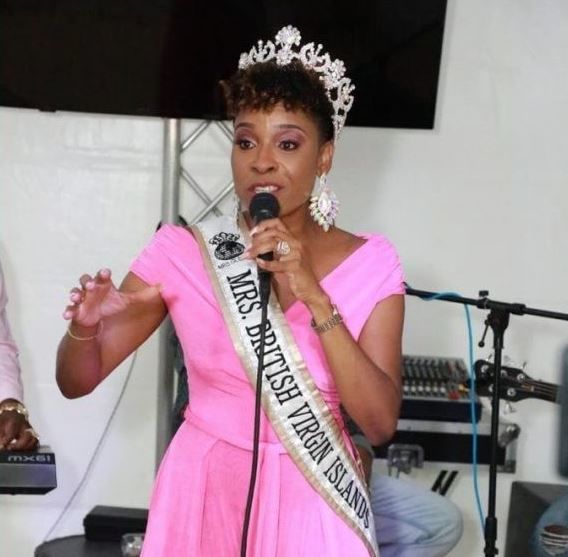 Mrs British Virgin Islands 2022 Dr Arliene T. Penn is the winner of the WIN ‘Reclaiming Me’ Song of the Year.

This announcement was made by Dr Tracy Kemble, CEO and Founder of the W.I.N (Women In Need) Foundation and Mrs Globe pageant on Sunday, August 7, 2022, during the official launch of Dr Penn’s single ‘Reclaiming Me’ at Myetts Chill Zone in the Cyril B. Romney Tortola Pier Park.

Dr Penn competed in the international competition on June 3, 2022, during the Feminine Boss Luncheon and WIN Song of the Year competition hosted by Dr Kemble in Palm Springs California, USA.

Penn walked away with the first runner-up position in the WIN Song of the Year competition. Now she has been able to capture this additional win for the VI.

According to Dr Tracy, Dr Penn’s song will be played every week at the start of the Reclaiming Me programme, a weekly global empowerment initiative that helps women who are narcissistic, abused or affected in any area of their lives to be empowered and renewed as they reclaim who they are.

Dr Arliene T. Penn performs during the official launch of her single ‘Reclaiming Me’ at Myetts Chill Zone in the Cyril B. Romney Tortola Pier Park on August 7, 2022.

Mrs BVI Dr Penn said, “I am so excited because words are important to me, and to be able to take words that represent the foundation and bring them to life through song is what I am most excited about. The song is about women empowerment. It reminds them that they must have confidence to pursue their dreams.”

Director of WINBVI Mrs Alicia Green said, “This is indeed a proud moment for Mrs BVI 2022, WINBVI and ultimately the BVI. I am pleased that we were able to showcase the talent of the women of the BVI and further share BVI with the globe to empower others through song.”

Penn’s original piece was written by her and the music was done by Mr Brent D.R. Hoyte of Home Grown Studio.

Reclaiming Me can be downloaded from iTunes, Amazon, and Spotify. Proceeds from the song will be donated to the WINBVI Organisation and the W.I.N Foundation to help women in need locally and across the globe.