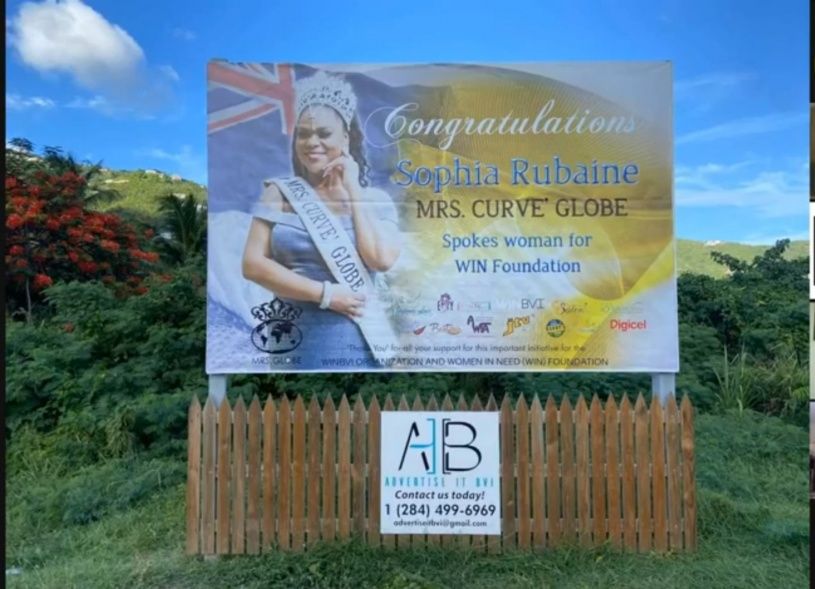 The reigning Mrs. Curve’ Globe, Sophia Rubaine was gifted $20,000 from the Government of the Virgin Islands, along with several gifts from the private sector for her remarkable achievement of becoming the first local pageant queen to earn a global crown.

She swept the title of Mrs. Curve’ Globe 2021 following a pageant in Palm Springs, California, USA on June 26th, as well as the Sophistication Award.

During a virtual presentation and award ceremony held last night, August 4, Minister for Culture, Hon. Dr. Natalio Wheatley said Rubaine’s achievement was “something to shout about”.

“In recognition of the commendable accomplishment of Mrs. Curve’ Global Sophia Rubaine, the Premier and I through our ministries we have both pledged $10,000 each, so that’s a total of $20,000 to award you for winning, and this is in keeping with our policy as a government for awarding and acknowledging the accomplishments of our people on an international stage,” he said.

He also announced that WIN BVI, the organizers of the local pageant, would also receive a grant of $6,000 from the government.

She also received her own billboard, compliments AdvertiseIt BVI, among other gifts.

“This is no easy feat; what you have done in Palm Springs, California, is commendable,” he said.

“You are another shining example that the BVI is filled with talent, and we celebrate this moment with you.”

Mrs. Rubaine thanked her sponsors, supporters, and the Government and the people of the Virgin Islands for their love.

She continued: “First, I want to start off by thanking God, I would not be here without God, especially thinking back three years ago when I didn’t even want to live, and he drew me closer to him.”

Mrs. Classique BVI, Deborah Maddox was also commended for her accomplishment in that global pageant and for winning the Motivator of the Year Award.