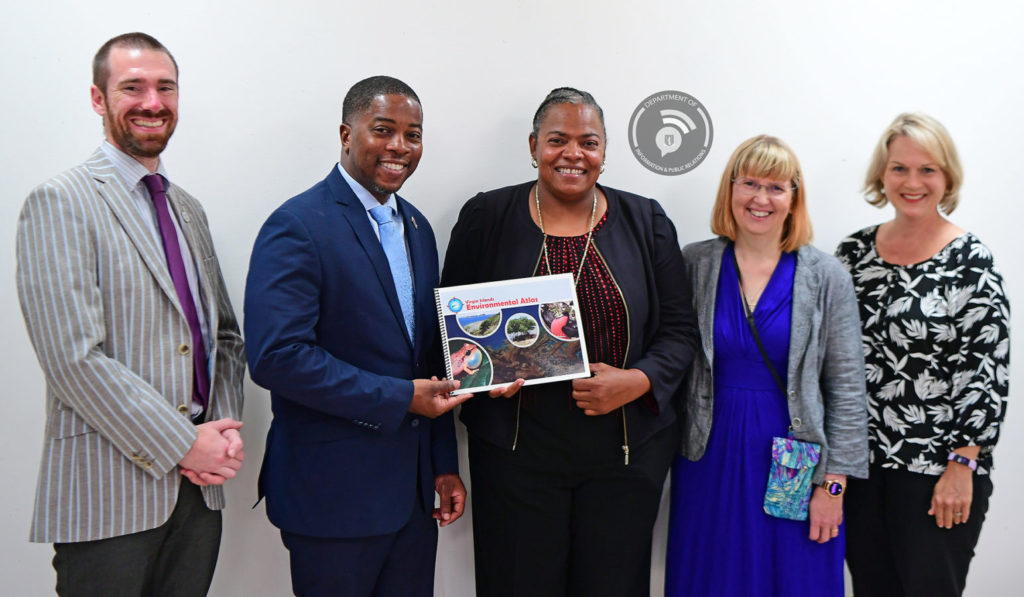 The National Parks Trust on behalf of the Government of the Virgin Islands has partnered with Environment Systems Ltd based in Wales on a climate change initiative funded by the United Kingdom that seeks to deliver strategic, long-term outcomes for the natural environments of the Overseas Territories.

The climate change project is a two-year project which hopes to integrate resilience and ensure the design and management of protected areas in the BVI.

The title of the initiative is Integrating climate change resilience into protected area design and management.

In a press conference on Friday to conclude the week that consisted of workshops, Minister for Natural Resources Melvin Turnbull thanked NPTVI and Environment Systems Ltd for their partnership to make the valuable climate change data available to the public upon the completion of the project.

“What I feel is important is continuing to take the direction and drive to help the public understand the work that has been done and will be continuously undertaken by not just the NPTVI, but the entire partnership that we have, to address climate change,” Minister Turnbull said.

Turnbull commended NPTVI Director Dr Cassander Titley-O’Neal and team, adding, “I know [Dr Titley-O’Neal] has been doing a lot of work and I know that this is her passion. I want to extend a special thanks to the team from the UK for the work that is going to be done in the next two years. I want to ask the public to be patient and understand that this data that will be collected is all to help us”.

During her remarks, Dr Titley-O’Neal explained the importance of the partnership and its timeliness.

“This is a continuation of an existing partnership with Environment Systems Ltd, having partnered on a previous Darwin Plus project from 2018 to 2020 to help model recovery from hurricanes after the passing of Hurricanes Irma and Maria in 2017,” she said.

“Climate change is impacting the BVI with more intensive storms and droughts, as seen by the floods and active 2017 hurricane season. This project will create a web dashboard that is specific to the BVI based on climate change modelling data. This work is intended to facilitate targeted Trust fieldwork within our 21-park network, inform decision-making based on available data, and raise public awareness,” Dr. Titley-O’Neal continued.

Meanwhile, Environment Director at Environment Systems Ltd Dr Katie Medcalf gave a presentation on the effects of climate change and explained how the data that will be gathered in the next two years can inform decision-making and help in the fight towards mitigation and building resilience toward climate change.

The press conference was held to conclude a full week of workshops. The workshops provided an opportunity for the teams to get stakeholder input into the process to ensure that the models developed and incorporated knowledge and recommendation of the Virgin Islands stakeholders. Some of the sessions with local stakeholders were discussion-based, while others are more technical, exploring the climate data and remote sensing imagery.

The climate change modelling web-based dashboard is one of the main outputs of this project and is anticipated to be a useful tool for all government departments requiring such knowledge, to ensure that climate change is integrated into every facet of our daily lives and work.