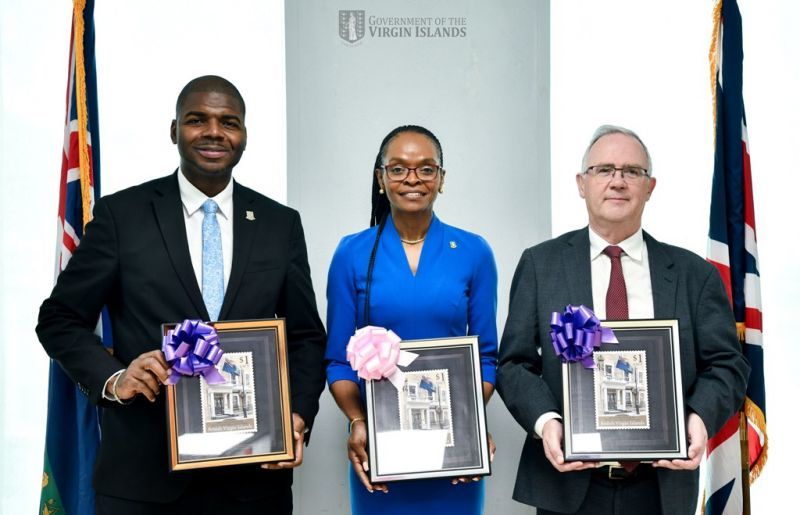 Acting Postmaster General, Mrs Iris Romney, while speaking at the launch on January 10, 2023, said the Government of the Virgin Islands, under the leadership of the then Chief Minister, Honourable Ralph T. O’Neal, OBE, approved the acquisition of BVI House in London in June 2002.

Under the leadership of then Chief Minister Dr the Honourable D. Orlando Smith, OBE, approval was formally granted for the establishment of the BVI London Office as a diplomatic mission on 7 January 2004. The BVI London Office became fully operational in August 2004 under the new structure with a budget approved by Executive Council.

Mrs Romney said, “It was a first step in establishing the BVI London Office and raising the Territory’s profile in the United Kingdom and Europe. The building, located at 15 Upper Grosvenor Street in Mayfair in the West End of London near Hyde Park, was intended to be used as the representative office through which the BVI Government’s EU and UK relationships could be managed on a permanent basis.”

Governor John Rankin in his remarks paid tribute to the current and former staff at the BVI London Office for their work in promoting the Virgin Islands as a place to visit, invest in and representing BVI’s interests in discussions with UK Government, with the European Union and others on policies which the Territory has an interest.

Governor Rankin said, “A stamp is indeed a message and whenever I receive a letter, I always look at the stamps. Those who will receive letters from the BVI will see that beautiful building and think about a little bit of how the Territory is represented in the United Kingdom and how the offices of the BVI represent the Territory worldwide.”


Premier and Minister of Finance Dr Honourable Natalio D. Wheatley’s made remarks at the launch and said the stamp captures BVI House in all its glory. He encouraged the public to purchase the stamp which he said is a worthwhile memento.

Premier Wheatley said, “The 20th Anniversary of the establishment of the BVI London Office at BVI House is a significant milestone in the national development of these Virgin Islands. The office is the outward extension of self-government in the Territory which began in 1950 and continues to develop today. As a representative of office, the BVI London Office reflects our ongoing desire as a people to represent ourselves and our interests in today’s interdependent and interconnected world.”


Premier Wheatley paid tribute to the late Premier and Minister of Finance Honourable Ralph T. O’ Neal, OBE for his vision in acquiring BVI House and establishing the BVI London Office. “It was one of the best investments the Government of the Virgin Islands has ever made, and it continues to pay dividends,” he said.

The BVI House building is located at 15 Upper Grosvenor Street in Mayfair in the West End of London near Hyde Park.

In addition to the office, BVI House is also home to the British Virgin Islands Tourist Board UK Office and private tenants.

The mandate of the office, as approved by the Executive Council, includes:

The BVI Post aims to become a major stakeholder by providing prompt, reliable and competitive global postal service to the residents of the Virgin Islands through innovative and efficient operation.
#the Virgin Islands  #John Rankin