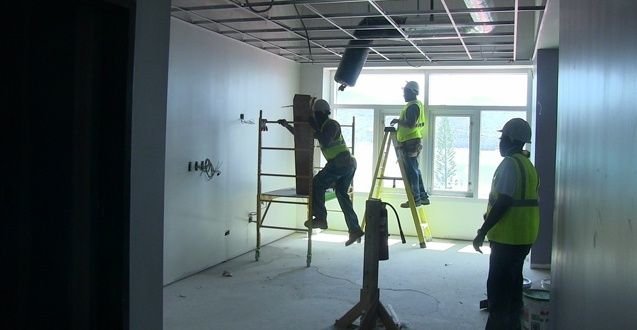 With the petty contract system under immense scrutiny, the Government is hoping that a new strategy to undertake infrastructural projects during catastrophic events can be adapted for use soon to stimulate the construction industry amidst COVID-19 pandemic.

Premier and Minister of Finance, Hon. Andrew Fahie disclosed that Government has been working over the past few weeks to develop a procurement regime that would allow greater participation by local contractors and service providers, while at the same time adhering to the principles of international best practice and assuring quality, value for money, transparency and accountability.

"We need our infrastructural work done, our local businesses need economic activity, and our people need jobs," the Premier stated in an address to the Territory last evening, August 9.

The Premier shared that one important feature of the new emergency procurement policy is that it will allow for, in some cases, the subdivision of larger projects into smaller packages.

"In this way, more local construction companies – including our smaller contractors – would be able to share in the opportunities that are created by your Government to stimulate our economy through construction, among other areas," the Premier stated.

The East End-Long Look Sewerage Project is one project that Government is looking at for subdivision and spreading the benefits.

"It is one, but it will not be the only one. So, our contractors should begin preparing themselves and their workers immediately. Get yourselves ready, especially with all your needed paperwork, because once all the legal steps are finished with this new policy, we want to hit the ground running, and with momentum," the Premier stated.

He shared that professionals will testify to some of the challenges local contractors face, which lock them out from being even considered for projects that they are capable of delivering.

According to the Premier, even the petty contract system has been fraught with challenges. He added that the situation is made even worse because of the precautionary measures that became necessary due to COVID-19.

However, he shared that the Ministry of Finance, and together with partner agencies, a procurement policy was developed and recently approved by Cabinet for times of emergencies, such as natural disasters, catastrophic events and pandemics, that will overcome these obstacles and allow Government to engage local contractors, while having a rigorous system of checks and balances operating throughout.

"We have completed the policy framework and we have been discussing it with funding partners such as international lending agencies. This is because we would need their approval to change conditions attached to those funds so that it would allow more qualified local contractors to benefit from these opportunities. By doing this we would be allowing the monies to stay in the Territory and circulate numerous times to positively contribute to the national flow of income," the Premier stated.

He stated that the feedback has been positive and that Government is feverishly working with the Attorney General’s Office to get the legislative changes, that may be necessary, submitted. After which, approval by both the Cabinet and the House of Assembly will be sought.

"This process will open many doors of opportunities for all our contractors in the BVI amidst COVID-19 era. This is a Government working for its people. This is a Government that cares. This course of action fits directly into what I meant when I said in the 2020 Budget Address that we must use what is in our hand to bring more prosperity to our land," the Premier stated.