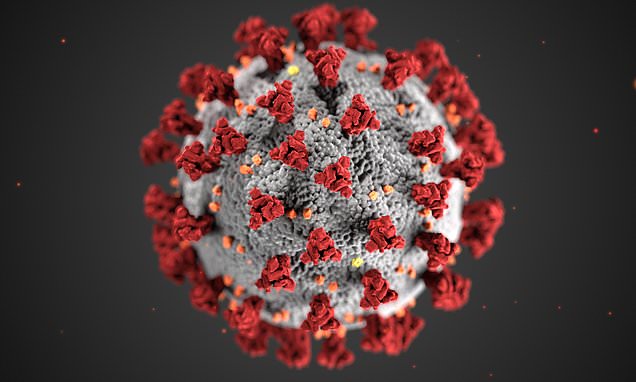 Research presented to the Scientific Advisory Group for Emergencies (SAGE) today warned a future strain could be as deadly as MERS - which kill 35 per cent of infected people - could be on the way.
A doomsday new Covid variant that could kill up to one in three people is a 'realistic possibility', according to the Government's top scientists.

Documents published by the Scientific Advisory Group for Emergencies (SAGE) today warned a future strain could be as deadly as MERS — which has a case fatality rate of 35 per cent — could be on the way.

No10's expert panel claimed the likelihood of the virus mutating is highest when it is most prevalent — as is currently the case in Britain.

And in a downside of Britain's hugely successful vaccination drive, the team warned the country's greater levels of immunity may help speed up the virus's evolutionary process.

Rolling out booster vaccines this winter and curbing transmission may help prevent a mutant strain occurring, according to the paper.

It also said ministers may have to consider culling or vaccinating animals which are found to be harbouring the virus, in order to stop it potentially picking up another mutation and jumping back to humans.

However, the SAGE report also claimed it was equally realistic that Covid will mutate to become less lethal over time.

Scientists unveiled the threat of a super mutant variant in a paper that looked at potential scenarios that could emerge in the not-so-distant future.

Experts — who weren't named — said a future strain may be resistant to vaccines if it came about by the jab-resistant Beta variant merging with the more transmissible Alpha or Delta variants.

The process — known as recombination — could lead to a strain with 'increased morbidity and mortality'.

The team admitted vaccines should work unless there was an extra-potent mutation that rendered jabs much less effective at blocking serious disease — which many experts say is unlikely.

But they said the extra lethality would be expected 'even in the face of vaccination since vaccines do not provide absolute sterilising immunity.'

The prospect of a deadlier variant is a 'realistic possibility' and would have a huge impact on the UK's death toll moving forward, the scientists said.

Politicians have warned the damning report shows the Government 'must not be complacent' as Britain appears to be coming out its current third wave of the pandemic.

Dr Philippa Whitford, vice-chair of the All-Party Parliamentary Group on Coronavirus, said: 'This report, which should have sent shock waves through the UK Government, was instead quietly snuck out among a glut of reports during parliamentary recess.

'Recommendations and comments made by SAGE bring home the simple reality — that we have not yet "defeated" this virus.

'The UK only donated its first vaccine doses internationally this week and, unless there is a rapid increase in global production, through sharing knowledge and technology, it simply will not be possible to vaccinate the world and bring the pandemic to an end.

'Without stricter border control measures we risk importing vaccine-resistant variants while uncontrolled spread here could lead to yet another UK variant.'

The Scottish National Party MP: 'The government mustn't stick its head in the sand or it will run the risk of un-doing the progress we have made over the past eighteen months.'

Professor Martin McKee, an expert in public health at the London School of Hygiene and Tropical Medicine, said: 'These stark words from the Government's own advisors underlines what many of us have been warning about and confirms there are still obstacles to overcome.

'The government can't be complacent, they must continue their support for the development of the next generation of vaccines and prioritise the reduction of infections here at home to reduce the possibility of another domestic variant emerging.'

The warnings about variants were scattered in a series of reports unveiled by the Government advisory group as part of its weekly transparency pledge.

SAGE warned that the virus can infect a host of different animals including minks — which have had to be culled in Denmark in their thousands.

The group warned further culling or animal vaccinating may be needed in other species to prevent them becoming reservoirs for the virus.

They listed dogs, cats, mice, rats and ferrets as animals who are known to have been infected with Covid.

Another potential issue they found is the use of anti-virals to treat Covid once a patient is already infected.

No10 has already launched an 'anti-virals taskforce', with the goal of finding drugs that Britons can take at home to treat any symptoms of Covid.

Scientists warned overusing the drugs could lead to more mutant strains and warned doctors to only prescribe them in the most serious cases of Covid.

But in more hopeful news, the group also predicted it is a 'realistic possibility in the long term' that as Covid continue to mutate it will cause less serious disease.

The group wrote: 'In other words, this virus will become like other human CoV that causes common colds, but with much less severe disease predominantly in the old or clinically vulnerable.'
#vaccine  #Covid  #Coronavirus  #Vaccines