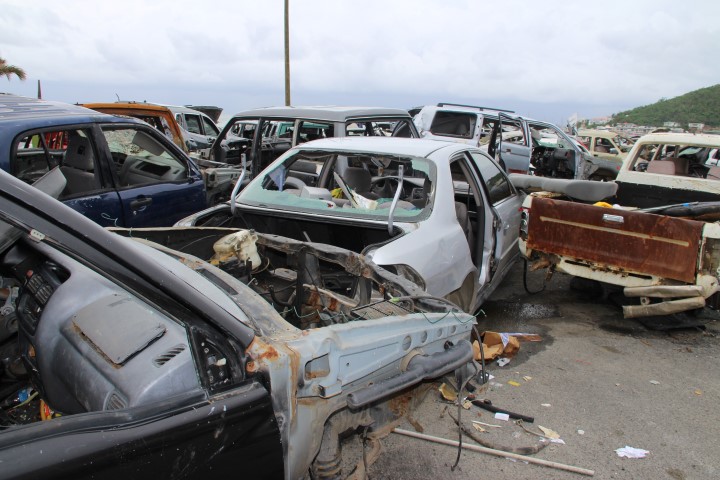 With the festive season fast approaching, the Department of Waste Management continues its beautification project by ramping up its efforts to remove derelicts that line the streets of the territory under its campaign ‘No Derelicts Left Behind’.
The Manager of the Department of Waste Management Neville Allen said a significant number of derelicts have been removed since they launched the campaign and started going around the Virgin Islands to remove these items.

He noted the department is happy with the progress they have made and the main aim is to do a territory-wide removal of derelict vehicles from public and private properties before the end of the year. Allen said the process of reporting abandoned vehicles is quite simple and it usually starts with someone from the public making a complaint to the department.

“They are required to give the description, location of the derelict vehicle and indicate if it is situated on private or public property. Then an officer goes to the location, identifies the vehicle(s) and issues a notice appropriate to the location,” Allen said.

“The notice is completed in triplicates; the original is affixed to the derelict or can be handed to owner and two (2) copies remain with the department. The notice states section 7 of the Derelict Vehicle (Disposal) Act, 2000 in which the individual is in contravention. Vehicles on Public Property have a duration of 14 days and Private Property 21 days before the notice expires,” he added.

Allen further explained that once the notice expires, the department’s wrecker operator or hired operator will remove the derelict from the location and transport it to the temporary site in Pockwood Pond.

Owners of derelict vehicles are advised to contact the department if they have interest in a vehicle that was tagged as the officer may use discretion and may give an extension to the notice based on the circumstance.

Last week, the Minister of Natural Resources Vincent Wheatley had said the government is committed to removing derelict boats from the shoreline as it was damaging to the environment but the process is currently halted because of the economic strains of the COVID-19 pandemic.

“The boats have to go but it is not a cheap venture. It will cost us several million dollars but at this point in time, because of deficit spending, we can’t do it right now. But it has to be done. Sadly, we have no fund right now,” Wheatley said.

Back in October, the East End Police Station had led an initiative to remove abandoned and neglected vehicles that line the roadways of the eastern side of Tortola. According to the police, the number of abandoned vehicles along the roadways have made road travel difficult and unsafe for both motorists and passengers.

The motoring public is also advised to exercise caution around these wreckers and trucks when they are travelling to and from the derelict site, especially when they are loaded with vehicles.

The East End Police planned to remove more than 60 vehicles during the first stage of the initiative. However, they will continue with boats, trailers and other equipment left on the territory’s roads.

Meanwhile, the Department of Waste Management said they are committed to ensuring the natural beauty of the territory is enhanced by utilising state of the art waste management technology to ensure timely collection, disposal and where possible, the recycling of waste.
#the Virgin Islands  #COVID-19  #Covid