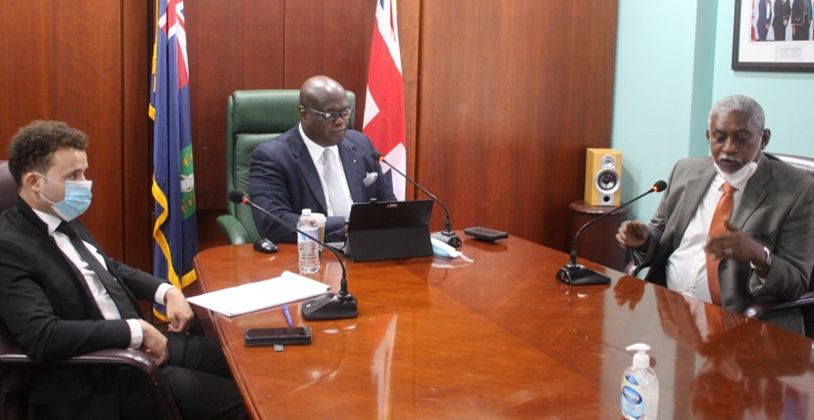 No Fixed Amount For HoA’s Defense In CoI

Under heavy questioning from reporters, Senior Attorney at Silk Legal, Mr. Richard Rowe says there is no fixed sum for the provision of legal services to the House of Assembly in the ongoing UK backed Commission of Inquiry (CoI).
The firm is contracted by the HoA to represent seven members in the hearing that is investigating allegations of corruption within Government and its agencies.

“There is no contracted amount. It is contract which determines itself by the number of hours that we spend on the CoI. I can assure you that it is significantly less than those contracted by the executive, the government,” Mr. Rowe said during a press conference on Wednesday, August 18.

He added, “Our services are offered at a far lesser rate and for greater consideration of the wellbeing of the territory as of COVID. So you wouldn’t find us anywhere near the $100,000, $3 million or otherwise. It will be significantly less, and the Speaker can confirm that.”

He also informed that the only funds they have received thus far is a $30,000 as a deposit for their legal services.

In the meantime, Speaker of the House of Assembly Hon. Julian Willock countered that the issue for him is not only the financing, but as the Speaker of one of the branches of government, it is the reputation of this country.

"That’s what’s at stake, but as Mr. Rowe said, we will not bust the budget,” the Speaker stated.

Hon. Willock said he did not want to disclose any further information on the cost factor of the legal services of Silk Legal.

“I would prefer that that information not be disclosed at this time because, as Mr. Rowe said, there is not a fixed rate. It depends on the hours, on the instructions, it depends on a lot of different things,” the Speaker explained.

Further commenting on the topic of compensation, Mr. Rowe said they intentionally pick and choose the best times to appear before the CoI and subsequently bill the government to avoid unnecessary spending in lieu of the COVID-19 challenges on the country’s purse.

Withers, the law firm that is representing the executive branch of government just billed the government over $3 million. A total of $5 million has been earmarked for legal services in the CoI, Premier and Minister for Finance Hon. Andrew Fahie recently revealed.
#COVID-19  #Covid  #CoI  #Commission of Inquiry  #Fahie