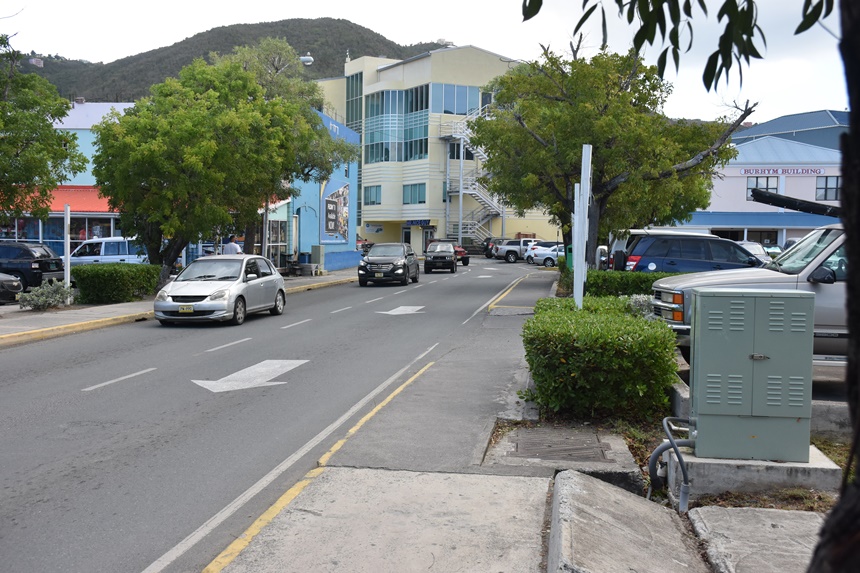 Stemming from a recent incident in which traffic was seen backed up from Waterfront Drive down to the roundabout in Road Town, BVI News conducted multiple days of surveillance on sections of the city to see just how well government’s traffic-turnaround was working.

Our news centre did not see a recurrence of that incident and the flow of traffic was observed to be virtually smooth during morning, afternoon, and evening-hours.

According to the Head of the Royal Virgin Islands Police Force (RVIPF) Traffic Division, Sergeant (Sgt) Augustus Bruce, this might be because of a number of tweaks have since been made to the turnaround system, which he said is now working at about 90 percent optimality.

However, he said a contributing factor to why the traffic-turnaround is still not running as smoothly as intended is that a lot of persons have not been utilising the road signs which direct how motorists should manoeuvre when entering and exiting the roundabout.

“If you occupy the extreme left side of the road coming from Waterfront, when you reach the roundabout you must turn left, you cannot drive around the roundabout from that point. A lot of people are not utilising the arrow or the direction of the road markings, thus creating some confusion in other drivers’ mind,” Sgt Bruce explained.

“But going forward, it is marked out now so that the roundabout has an entry and an exit. So you cannot enter the roundabout coming from the west just at any point since there will be an entry point,” he added.

The top traffic cop also pointed to an issue that previously existed at the junction that leads from the Noel Lloyd Park to Administration Drive.

He said there has been an increase in the volume of traffic which travels to that because of the new one-way system. As a result, a decision was made to implement new road signs which gives these motorists the right of way.

“We have placed two stop signs on the Admin Drive – one east, one west – to allow persons utilising that road to stop and to allow traffic coming from the Noel Lloyd Park road to go on to Admin Drive,” he said.

Sgt Bruce said at least one more adjustment is to be made to the system.

He said: “We have another issue which is on Chalwell Street – which is that portion of road going towards Midtown restaurant – because people are still parking on both sides of the road.”

“There is a no parking sign there and the department is trying to shift out where the private entry is from the public so that we can put the sign to restrict parking on one side of the road,” he added.

Joint initiative between RVIPF and ministry

Meanwhile, the poilce sergeant also said the RVIPF has been working in conjunction with the Ministry of Transportation to have a number of persons assigned to coordinate traffic at the new change-around points in Road Town.

“We started off with about 29 persons but as we progressed, we tried to cover the key points and those persons who have not appeared to be doing what I expected of them we have since stopped them and we have kept the more reliable persons,” Sgt Bruce said.

“We are still waiting going forward to see what measures will be put in place, whether we are going to keep four or five of the best persons to assist with enforcement,” he added.

Sgt Bruce, in the meantime, said the RVIPF will continue to monitor activity in Road Town and will be actively enforcing the law for all persons who continue to violate it.