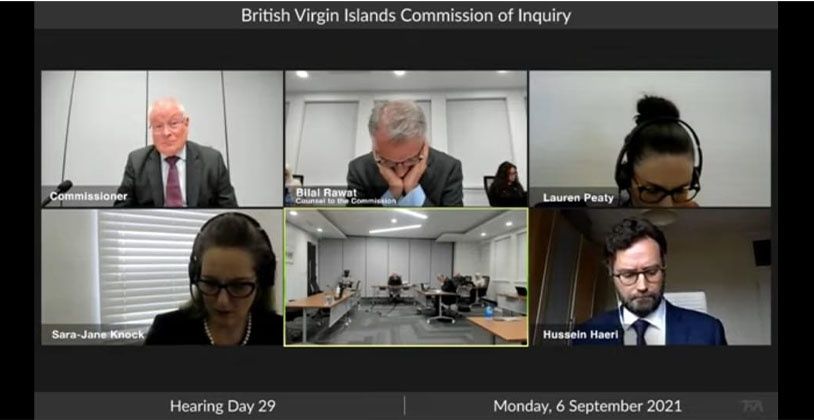 Nothing Or No One Will Deflect Or Distract Us-CoI

Commissioner of the United Kingdom (UK)-led Commission of Inquiry (CoI) Sir Gary Hickinbottom has once again expressed frustration over the slow pace of receiving critical information needed for the inquiry’s progress.

After a roughly one month break, the CoI resumed hearings today, September 6, which are being live-streamed from their office at the International Arbitration Centre.

Addressing the issue, Sir Gary said: “Today we resume taking evidence at CoI hearings, and I am afraid that this morning that we will have to deal with some of my frustrations in making progress. The causes today are very much the same as the causes in June and July when they were fully aired in the open hearings that I held.”

He continued: “I will continue to press for information which I consider relevant to my terms of reference; however, I should make it quite clear that I have reached the stage of this inquiry when it is more than ever important that I press ahead, complete the hearings and write and promptly deliver my report that I have no doubt, no doubt at all that the public welfare of the BVI requires that I do.”

Sir Gary expressed that he, along with his team “have been frustrated, but I must make it very clear that nothing or no one will deflect or distract us from completing the task set by my terms of reference.”

Meanwhile, Counsel to the Commission Mr. Bilal Rawat sought to hammer those issues further on behalf of the Commissioner. He said the members of the House of Assembly represented by Silk Legal “have not made contact with the CoI to make any arrangements to attend even remotely."

Mr. Rawat said on June 2, the Commissioner publicly announced those topics that he intended to investigate at future hearings, and they included statutory boards and requests for affidavits they sent out on June 4, which would aid in producing “more focused hearings.”

“Progress, and this has been ventilated at previous hearings, has been slow, not just in relation to affidavits relating to statutory boards but in relation to other affidavits, and you have had to grant extensions, and as we have made clear again in previous hearings with very, very limited exceptions, you have granted those extensions in hope that it would produce usable evidence that would mean more focused hearings.”

Mr. Rawat added: “The delays in relation to the statutory boards redaction affidavits were such that you could not as you intended to deal with the topic on the week commencing July 19. The expectation, however, was that we would receive outstanding affidavits well before the resumption hearings, but unfortunately, that has not happened.”

The attorney said to give some immediate examples; one of those who has been asked to submit those documents is Acting Financial Secretary Mr. Jeremiah Frett.

He informed that an affidavit relating to statutory boards was received on the evening of September 3 2021, notwithstanding that it had been sworn on August 26 2021.

“Those documents runs to hundreds of pages, and both these witnesses are due to be called this week,” Mr. Rawat bemoaned.

Mr. Rawat further explained that delays in receiving critical information affects the work of the CoI.

“As we said before, the concerns of the CoI is that when there are such delays, [it] undermines the ability of the CoI team to prepare properly, and that doesn’t just disrupt the CoI, it disrupts witnesses who would have taken time and scheduled to attend on particular days.”

He said the CoI has now reached the point where delays cannot be allowed to continue to disrupt the course of the CoI.

Notably, the Government organized a specific unit – the Inquiry Response Unit – to facilitate the free flow of any documents requested by the CoI; despite this, progress have been reportedly slow.

The CoI was issued on 19 January 2021 to look into whether corruption, abuse of office or other serious dishonesty may have taken place amongst public, elected and statutory officials in recent years; and to make appropriate recommendations as to governance and the operation of the law enforcement and justice systems in the BVI.