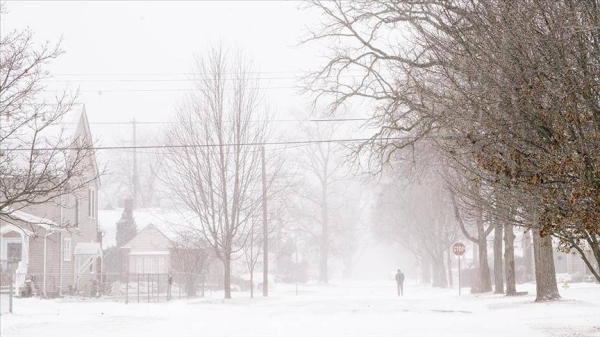 ‘Once-in-a-generation’ snowstorm kills 17 in US: Report

A snowstorm in the US killed at least 17 people in weather-related accidents and left more than 1.7 million homes and work places nationwide without power, local media and the National Weather Service (NWS) said on Saturday.
The NWS announced that the freezing winds coming from the Arctic, which affected about two-thirds of the country, will continue to have a significant impact on the central and eastern parts of the country at the end of the week.

At least 17 people were killed and many others injured in traffic accidents, while authorities warned that the visibility had dropped to zero due to the snowstorm, with wind gusts reaching up to 115 kilometers (over 71.45 miles) per hour in some areas, according to local media.

According to the Power Outage website, more than 1.7 million homes and business places across the country remain without electricity, while officials warned that it may take days to restore the supply.

More than 200 million people are expected to be affected by the freezing temperatures in the US.

A state of emergency has been declared in several states, including New York, Virginia, Kentucky, Georgia, North Carolina and Oklahoma, while US President Joe Biden urged citizens to heed the warnings.

In the US, on Dec. 21, national and local weather reporting agencies had warned of severe cold and snowy weather conditions that could be seen "once in a generation."

The National Oceanic and Atmospheric Administration (NOAA) had announced that cold weather conditions that have not been experienced in the last 40 years are approaching in some parts of the country.

In addition, it was also reported that the storm would be equivalent to the pressure of a category three hurricane in the Great Lakes region of the country on the Canadian border.

Due to the storm, the ground floors of some hospitals and businesses on New Jersey's coastline were submerged by the waters of the overflowing Hudson River, while many vehicles were damaged by the flood.

Coastal areas of Queens and Brooklyn were also damaged by rising ocean waters, while waves brought by high winds left some streets and habitats along the coastline unusable.
#Joe Biden