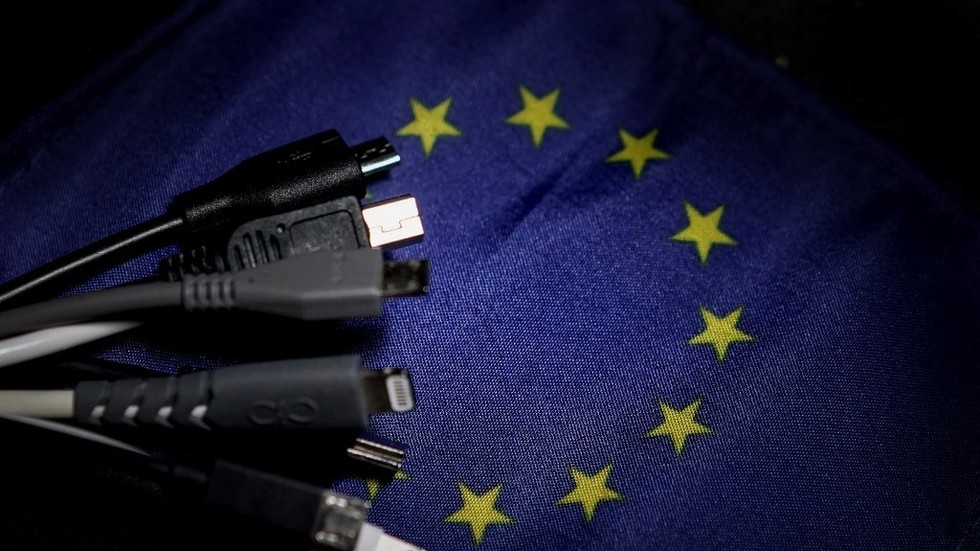 One charger to rule them all? EU announces plan to impose universal phone cable in blow to Apple

In a setback for Apple, the European Union has announced plans to standardize chargers for smartphones and other small electronic devices, giving manufacturers a two-year transition period in which to fall in line.
Phones are currently served by three main chargers; Apple’s ‘Lightning’ connector, USB micro-B ports widely used on Android mobile phones, and the modern USB-C ones that the EU’s proposal favors.

Implementing a universal charging cable would combat the problem of electronic waste, allowing people to use their existing chargers when changing to a new device, the European Commission argued.

“European consumers have been frustrated long enough about incompatible chargers piling up in their drawers,” EU Executive Vice President Margrethe Vestager said in a statement.

Apple – whose products typically use custom charging ports – has long countered that such mandates would impede innovation and lead to even more pollution. The tech giant, however, has already switched to USB-C charging ports on newer models of its iPad and laptop computers.

“Strict regulation mandating just one type of connector stifles innovation rather than encouraging it, which in turn will harm consumers in Europe and around the world,” Apple responded.

The EU has pushed back on that argument, however. “It is not against innovation. It is for European consumers, it is not against anyone,” Thierry Breton, the internal market commissioner, said.

According to an EC impact study from 2019, about half of the chargers sold with mobile phones across the EU in 2018 had a USB micro-B connector, while 29% had a USB-C connector, with the Lightning connector accounting for 21%.

The proposed rules will apply to smartphones, tablets, cameras, headphones, portable speakers and handheld video game consoles, while other products like earbuds, smartwatches and fitness trackers were reportedly not considered due to technical reasons.

The proposal will also cover fast-charging speeds, meaning that manufacturers offering rapid charging features on their products will be required to ensure that battery power recovery rates remain uniform across devices.

For over a decade, the EC has had a voluntary agreement regarding cables in place with manufacturers, but says the current situation is too “inconvenient” as European consumers spend roughly €2.4 billion ($2.8 billion) yearly on standalone chargers that are not bundled with their devices.

“We gave industry plenty of time to come up with their own solutions, now time is ripe for legislative action for a common charger,” Vestager said.

The proposal still needs to be debated by the European Parliament and member states before coming into effect, giving companies “ample time” to comply with the new rules. But Apple said the 24-month transition period could affect current sales.