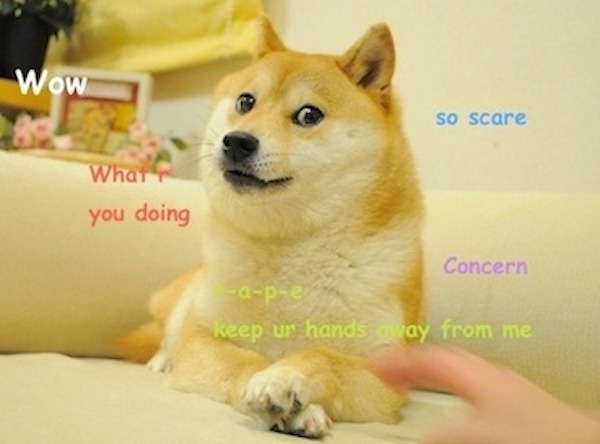 Original 'Doge' meme will be auctioned as NFT

Doge, the iconic meme of an excited-looking shiba inu, will be sold as a nonfungible token, or NFT, in an auction starting Tuesday.

In the decade since the images of Japanese nursery teacher Atsuko Sato’s shiba inu Kabosu were shared, “doge” has been used to portray the silliest inner thoughts of the poster or the dog.

The image of Kabosu is usually covered with somewhat inarticulate words, typically in Comic Sans typeface, expressing things like “wow” and “so scare.”

Doge has had a recent resurgence with the popularity of Dogecoin, a cryptocurrency branded after the meme. Although Dogecoin has been around for several years, it spiked in popularity after Tesla CEO Elon Musk endorsed it on social media.

Zora, an NFT auction site, will host the auction, which is being curated and certified by Know Your Meme, the internet meme database.

“This is the first time Know Your Meme is certifying the authenticity of a meme NFT, as we were able to verify that Atsuko herself would be auctioning the photographs of Kabosu,” said Don Caldwell, the database’s editor-in-chief.

He said it’s important for Know Your Meme to certify the auction because some people have tried to mint NFTs they do not own.

“Having interviewed Atsuko in the past, we were thrilled to be involved in this auction. Doge is indisputably one of the most beloved and iconic memes in internet history, and Atsuko herself is such a lovely person,” Caldwell said.

NFTs are a kind of certificate of authenticity. The NFT is a string of unique characters. The characters are connected to a blockchain, a group of computers that act as a digital ledger that no one computer can change. The same concept powers cryptocurrencies like Bitcoin, but while bitcoins are all essentially the same, NFTs are nonfungible, or unique.

An NFT of Doge would not act as a copyright, however. The NFT is more like a digital autograph from the meme creator, Decrypt reported, certifying authenticity — similar to an autographed baseball card.

The proceeds from the sale of Doge will go toward charities, a spokesperson for the auction said.

A recent influx of memes being sold as NFTs has led experts to suggest that the market is in a “meme gold rush.”

Other meme makers who have sold their iconic images in the meme gold rush are “Disaster Girl,” whose real name is Zoe Roth; “Bad Luck Brian,” whose real name is Kyle Craven; “Overly Attached Girlfriend,” whose real name is Laina Morris; and “Success Kid,” a photograph Laney Griner took of her son, Sam. The “Charlie Bit My Finger” YouTube video also sold in May before it was removed from the site. Other memes that have been minted as NFTs include Gary Brolsma’s “Numa Numa” video, Christopher “Randall” Gordon’s “The Crazy Nastya — Honey Badger” and Jordan Scott’s “Two Pretty Best Friends” TikTok, according to a statement from the NFT agency NetGems.

Caldwell said it’s important that the actual creators be vetted so they’re the ones to auction their work and get credit.

“We believe creators should get properly credited for their work and that this space desperately needs this sort of oversight,” he said.

Source: Original 'Doge' meme will be auctioned as NFT – Fintechs.fi