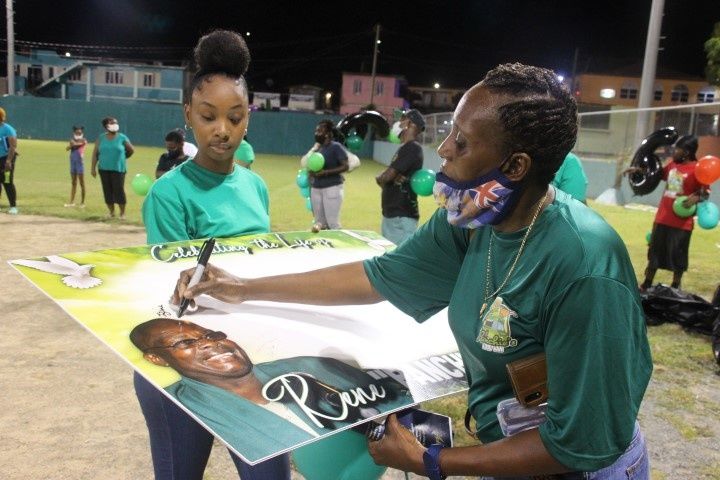 'Panchie' Had Plans To Vaccinate – Widow

The late Mr. Rene 'Panchie' Jeffers of Sophie Bay who died after contracting COVID-19 on August 2, had plans of becoming vaccinated against the virus.

Mrs. Izine Telemaque Jeffers, the widow of the late businessman and sports enthusiast, said; however he never got the chance to become immunized.

"He had intentions of taking it because he wanted to travel as well to go and seek medical help also but he didn't do it," she told BVI Platinum News during a candlelight vigil held in her late husband's honour on Wednesday, August 25 at the E. Walwyn Brewley Softball Park in Long Bush.

When asked if she would encourage being inoculated, she said it is a personal decision that one should make; however, she accepted the vaccine.

At the time of his passing, Jeffers had underlying health problems such as hypertension and last year he had a back surgery.

Meanwhile, Mrs. Jeffers said during her husband's final moments, from him contracting the virus to his passing, she was seeking medical attention abroad.

She expressed that his passing has been hard on her. The couple shared 22 years of marriage and 35 years of being in a relationship, although it was rocky at times.

"I saying maybe if I was there, he would have gotten his strength to come back and cuss me," she said lightheartedly.

She added, "I asked God for strength every day so I guess I am getting my strength from God. I don't know what's going to happen on Saturday because I haven't cried out yet because everybody saying be strong, be strong for this person, be strong for that person, and I have friends who are praying for me. That was a hard one."

Mrs. Jeffers explained that they held the vigil because he loved sports and because they were unable to have the funeral held on the softball field.

The funeral will be held on Saturday. The viewing will be held from 9 to 9.30 for family only, followed by burial. The memorial service will then be held at the New Life Baptist Church.

"He used to make sure that everybody was well provisioned after the game or during the game. You could always hear that distinct voice wherever he is; no matter who you is, he go let you know what it is. May his soul rest in peace," he said.

"I knew Panchie from practically when he came here," said Mr. E. Walwyn Brewley, who the softball park is named after.

After sharing some light moments of the late Mr. Jeffers with the crowd, he stated that "He was a student of the game, he was a perfect ballplayer. He might not have been the fastest runner, but the BVI Softball Association has lost a great player."

"Everybody who be around Softball knows whether I on Panchie team or against he team, he don't like me at all," another player said amusingly,"

He added: "He would give his support, he would give a little critic here and there, but he will show up. He was a good first baseman I ain't going to lie. He don't make many errors. He was one of the persons I used to look up to when I was a young boy playing Softball, so he will be remembered, and he will be missed."