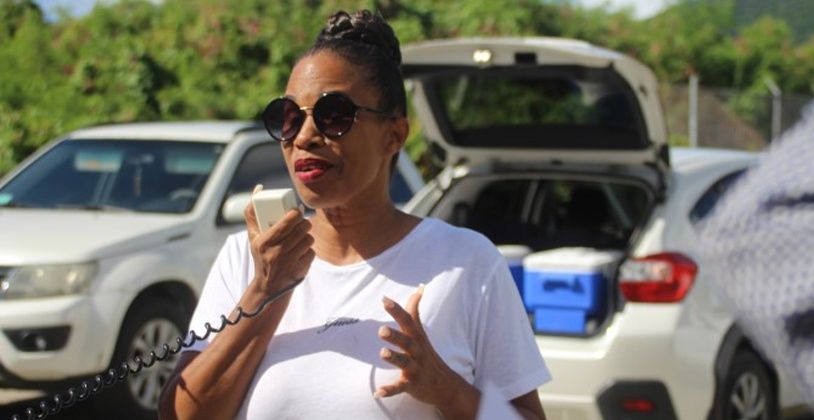 One of the organizers of The British Virgin Islands Civic Action, Cindy Rosan-Jones said the territory-wide sick out and go slow day, is going well.

The sickout was on Thursday November 18 and the go-slow day is being carried out today, Friday, November 19.

“Yesterday we had the sick out and I know quite a few people sicked out, I got quite a few messages, I also had some employers sharing about their employees with me. So I know there was a bit of sicking out. The go-slow, I know I had a few people telling me they going slow,” she told BVI Platinum News today.

She said the concept behind ‘go-slow’ is, “ you are going to work, because one of the reasons we turned today into a go-slow day, because apparently according to the labour code if there is a holiday you cannot stay out the working day before or after. So we turned today into a go-slow. Which means you show up for work but you are not productive.”

In the meantime, the protest against the taxpayers footing Speaker of the House of Assembly (HoA) Hon. Julian Willock’s legal fees associated with the failed injunction against the three Commission of Inquiry (CoI) lawyers, slated for Monday, November 22, is still on.

During the protest, residents will again be calling for the resignation of the Hon. Speaker.

“Yes our protest is still on for Monday. We are gathering at about 8.30 am across from the Governor’s House and the protest starts at 9 o’clock. We proceed down to the House of Assembly and that’s not by Save the Seed, it is at the original HoA. It ends there and we are going to have speaking and so forth there and we are going to wrap it up for the day,” Rosan-Jones related.

When asked why the protest was heading to an empty HoA building, she remarked that, “It's symbolism.”

She said one of the reasons for the march on the holiday observing the 1949 March was because persons were finding it difficult to participate during days they have to work.

Rosan-Jones informed that the institution – House of Assembly (HoA) – that came out under the aforementioned march, is now “under threat now so it is symbolic for us to march on that day to our original HoA. So we are not marching to give them anything; it’s about a protest whether the Premier is here or not.”

She said persons can also choose to wear other colours other than black and they can choose to hide their faces or expose them.
“So it is encouraging our people to stand against injustice,” she added.

Notably, there will also be a re-enactment of the 1949 March on the previous day where residents will be marching from the Band Stand to the Sir Olva Georges Plaza.