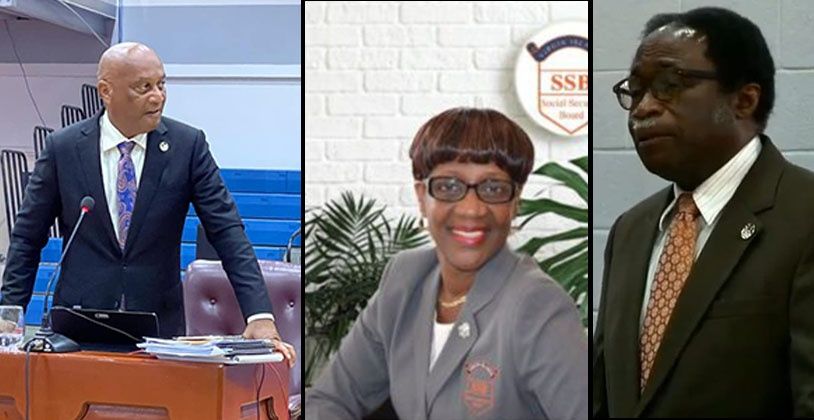 The Government is facing mounting pressure to end the acting appointment of Mrs. Jeanette Scatliffe Boynes and appoint her as the substantive Director of the Social Security Board (SSB).

A heated debate ensued in the House of Assembly last evening, August 26 as the Government introduced a Motion to extend Scatliffe Boynes’ appointment as Acting SSB Director for a further six months.

However, the Opposition Members would not support the Motion which was introduced by Hon. Vincent Wheatley, Minister of Natural Resources, Labour and Immigration.

Opposition Member and District Three Representative Hon. Julian Fraser countered the Government’s Motion by moving for an amendment to have the House approve Scatliffe Boynes as the substantive Director of SSB.

“I am sure the minister (Hon. Vincent Wheatley) didn’t bring it here before he consulted with the board (SSB’s board), I am sure he did. There is nothing saying that after consultation you have to take the advice, even if he did take the advice this is a different ball game once it gets here Mr Speaker. We make the appointment,” Hon. Fraser said.

“It doesn’t say that this House of Assembly cannot appoint an individual who the board recommends for the minister which he didn’t have to accept in the first place. So, this Honourable House is only doing what it thinks is right,” he passionately argued, stating that the right thing to do is have Boynes Scatliffe appointed director since she has been there for over 30 years and did an exceptional job as deputy director.

The motion by Minister Wheatley stated that the House of Assembly of the Virgin Islands, by Resolution No. 5 of 2021, previously approved the appointment of Mrs. Jeanette Scatliffe Boynes as Acting Director of the Social Security Board for a period of six months in the first instance, with effect from 1st January, 2021.

“Now therefore, be it resolved that the House of Assembly of the Virgin Islands approves the appointment of Mrs. Jeanette Scatliffe Boynes, to continue to act as Director of the Social Security Board from 1st July, 2021 to 31st December, 2021."

“…You are telling me that you cannot trust her to be the director of the social security board after being there as long as she has who has acted numerous times because the director must have gone out a number of times when she (Boynes) was deputy director,” he argued.

He believes that the government is aware that she is interested in the position.

“Let someone get up and tell me here tonight that she doesn’t want it and don’t tell me that the position has to be advertised. That is total rubbish…do the right thing,” he said.

The other three opposition members- Hon. Marlon Penn, Hon. Mark Vanterpool and Hon. Melville Turnbull, supported the amended motion by Fraser. They too believed that it is only fair that she be appointed immediately as the director of SSB.

Meanwhile, Premier and Finance Minister Hon. Andrew Fahie said things must be done the right way, pointing out that he
supports the motion by Minister Wheatley but also respects the position of Mr Fraser.

Premier Fahie said while the House is independent from the executive, it is not or should not be divorced from good governance.

He suggested that they take the issue back with the SSB’s board and have the board recommend her to be confirmed to the position, following which they return to the House for approval.

Premier Fahie in citing the law, said it’s not about Scatliffe Boynes.

“… [If] we wanted to change the name of the board person or the time that they would serve, I would have gone along with that easily. But the (SSB) Act calls for the person who is over the operation of the board, for recommendations to be made by the board and then brought to Cabinet and then the House,” he said.

He added, “[it’s not about her at all] because we are the ones who brought Mrs Boynes for the first six months based on the recommendations from the board’s board.”

The finance minister said the government is fully aware of the capabilities of Scatliffe Boynes.

“But let us do the right thing.” He also said that her confirmation may not have happened during the past six months because of the Covid-19 spike where everything was mostly shut down.

He also lamented that Ms Skelton upon her departure did not recommend Scatliffe Boynes to fill the position.

The debate on the matter will continue when the House resumes on Thursday September 2.

Mrs. Scatliffe Boynes assumed the role of Acting Director in January, after serving the organization for almost 30 years as Deputy Director. During her tenure, Mrs. Scatliffe Boynes functioned in numerous positions and managed a diverse portfolio in the organization; including Benefits and Contributions, Public Relations and Human Resources. She also served as Board Secretary.

The Acting Director has made presentations on behalf of the Board, locally, regionally, and internationally. Mrs. Scatliffe Boynes is a Vice President of the Inter American Conference on Social Security (CAOSA) representing Sub-Region IV (Caribbean and Americas Social Security organizations).